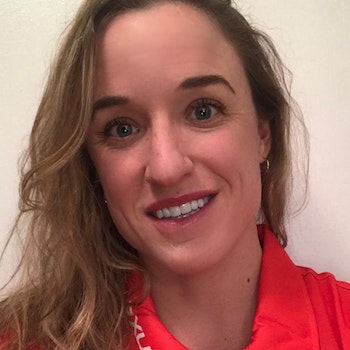 Brittany is a former division 1 tennis player turned triathlete. She grew up in Englewood, Colorado and travelled to national tennis tournaments year-round with her mother, Dorothy since she was 10 years old. At the age of 13, Brittany moved to Palm Springs, California to train under Jose Higueros at an elite tennis academy. Six months later, she relocated to Delray Beach, Florida to train under Hungarian National Tennis Coach, Nandor Veres. Brittany spent the next two years homeschooled and competing in ITF tournaments with the goal of competing professionally once physically mature enough. At 16 years old, Brittany returned to Colorado and played varsity tennis at Cherry Creek High School. She went on to win a State Championship title as a sophomore and spent her next two years focusing on being recruited to a division 1 tennis program. Brittany committed to play tennis at Santa Clara University in 2011, only to realize her trajectory was no longer upward, and the fire had burned out. She made the decision to move back to Colorado and pursue a new path. Unlike her competitors, she didn’t discover the sport of triathlon until joining the University of Colorado Boulder Triathlon Team in 2012. Brittany went on to finish as Runner-Up in the 2015 Collegiate National Championships and was crowned National Champion in 2016. Upon graduating with her BS in Mechanical Engineering/Engineering Management, Brittany had the opportunity to compete in the FISU World University Games in 2016, her first major elite competition. Shortly after graduation, she had decided to accept her professional license, and she moved to Colorado Springs to train full-time at the US Olympic Training Center while pursuing a career in Engineering Program Management at Keysight Technologies, an international leader in manufacturing electrical measurement and test equipment. In only her first two seasons, Brittany progressed tremendously, though the learning curve was steep. While mostly competing in Continental Cup Races, Brittany performed consistently enough to break top 90 in the ITU World Rankings. Her main achievements include podium finishes in Magog (2x), Montreal (2x), and top five finishes in Santo Domingo, Clermont, and Richmond Continental Cups, along with a top 20 finish in her debut World Cup, Salinas World Cup in 2017.