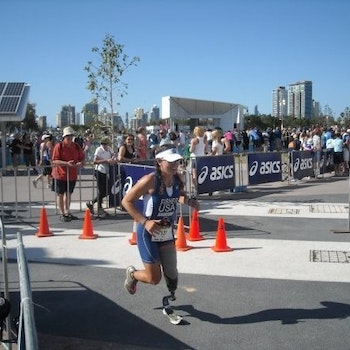 My family does not have a long history in triathlon. Neither of my parents have attempted a triathlon. My mom is an accomplished tennis player and recreational runner. My father played hockey in Canada.

I completed my first sprint distance triathlon in 2004. I completed the 2004 Grizzly Triathlon in Missoula, Montana, eleven months after my amputation. Before my accident, I was a competitive (able-bodied) collegiate tennis player. At 19, I knew that I was young, fit, and could compete in almost any athletic challenge. Yet I thought triathlon was too tough! I didn’t think I wad made of the right stuff to be able to complete a triathlon. Not until after I lost my leg, and nearly my life, did I attempt a triathlon. To my amazement, I finished the race and I was not last! After than race in 2004, I knew that I could be a triathlete, too.

The person who has had the most influence on my sporting career is Vicki Condon. Vicki, in many ways, saved my life. After my accident, she is the one who brought athletics back into my life. She helped me regain my identity and confidence. Before I could even walk, she had me back out on the tennis court! I sat on an office chair while she fed tennis balls to me. Vicki even helped me get a job teaching young children how to play tennis before I could walk! Once I received my first prosthetic, Vicki continued to help me get stronger physically and mentally. She was the best friend I had during that rough period in my life. The biggest obstacle that I have overcome is my own self-doubt.

I now train in Missoula, Montana, and an in an average week I swim train four hours, bike for 14 hours, and run for two hours. I have only participated in one ITU race: I qualified for the World Championships by completing an Olympic Distance event in my home state of Montana. Making the trip to Australia to represent my state was incredible! Doing well in Australia was also a bonus! My triathlon goal is to continue competing at a high level to earn a spot on the Paralympic Triathlon team in 2012…and hopefully in Paralympic Games to come! I’m doing my part with Team USA to have paratriathlon included in the 2012 Paralympic Games.

I have a busy life outside of triathlon. In addition to participating with Team USA Paratriathlon, I race with Team USA Para-cycling. It’s an honor to roll up to the line with such incredible athletes! Something that the triathlon world doesn’t know about me is that I have two cattle dogs, Betsy and Buster, who have proven to be the best training partners.