Yannick took up triathlon at age 14 in 1989. In 2006, he was training for triathlon when he suffered an accident that left his right arm paralysed. He then started competing in paratriathlon events winning 13 ITU World Paratriathlon events between 2005 and 2016, as well as securing the title of Winter Paralympian at the Torino and Vancouver Winter Games. 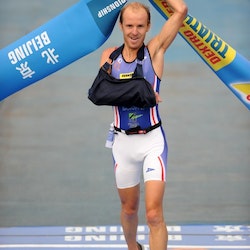