As the Olympic Winter Games opened in style last night in Vancouver, Canada, thousands of miles away in Norway, ITU’s winter triathletes were concentrating on their own battle for gold. Swedish star Andreas Svanebo and American Rebecca Dussault were the athletes who emerged victorious to deny Norway a victory on home snow.

In the women’s race, US athlete Rebecca Dussault entered her name in the record books as the first non-European athlete in the 14 year history of the sport to take an elite world championship title.  The US athlete, whose previous best was a bronze medal at last year’s world championships, led from the start of the race to claim a comfortable victory. Tatiana Charochkina from Russia took the silver, and Hanne Tronnes gave the home crowd something to cheer about claiming the final spot on the podium for Norway.

27 women were on the start line with the U23 and elite athletes competing together at the same time in Winter Triathlon. It was the American duo of Rebecca Dussault and Emma Garrard who set the pace early on, taking the lead from defending champion Carina Walse from Austria. The group were followed closely by a pair of U23 athletes who were looking to prove their abilities against their elite counterparts.

Coming into the first transition, it was Garrard and Dussault followed 25 seconds back by the Russian Yulia Surikova. Walse who could not regain her previous form, was a further 20 seconds back and looked to be struggling in the cold temperatures.

Disaster struck Garrard on the second lap of the bike when a flat tire effectively ended her chances of getting a medal. However her teammate and former Olympian Dussault, maintained the lead from the Russian Yulia Surikova. Surikova was later disqualified from the race for receiving nutrition from outside a designated zone during the bike leg.

On the final lap of the bike, Dussault made her move and broke away from the Russian, having about a 50 meter lead into transition two. Local girl Hannes Tronnes was a minute behind the leaders followed by Walse, and European Champion Marthe Myhre was a further 30 seconds back.

Dussault extended her lead to a minute with a quick transition, and the American who represented USA at the 2006 Winter Olympics in cross country skiing, and narrowly missed out on qualifying for the Vancouver 2010 Winter Olympic games, entered the final leg in confident form.

However the surprise of the day came from Tatiana Charaochkina, a relatively unknown Russian athlete who clocked the fastest ski of the day. The Russian gained time every lap making her way into second position in the elite race. Hanne Tronnes held on to third spot to claim bronze, with Marthe Myhre having a great ski leg to finish fourth.

“I was really happy with today as I’ve come over a couple of times and seemed to be plagued with bad luck. Last week I had a flat tire and last year at world championships I had a problem with my skis, but today I put I put it all together and I finally have the win. It’s wonderful.”
Rebecca Dussault
ITU Winter Triathlon World Champion

Full results from all races including U23 and Junior races are available here.

Norway came into the men’s race with the previous three World Championship titles under their belts, with both Tor Halvor Bjornstad and Arne Post looking to perform well in front of their home crowd and prevent the gold from leaving Norway.  However it was three time European Champion Andreas Svanebo who took the lead after the first lap on the bike, and never looked back to win his first ever world title over the reigning world champion Tor Halvor Bjornstad who had to settle for silver. The Russian Pavel Andreev took the bronze medal in a repeat of his European Championship performance one week earlier.

A tightly bunched pack of men all stayed together on the initial run leg with a group of about eight athletes leading the pace towards the first transition. The pack included Andreas Svanebo, Arne Post, Pavel Andreev, Maxim Kuzmin, Daniel Antonioli, Evgeny Kirillov and Konstantin Lavrentyey. Svanebo and Andreev exited the first transition zone side by side to begin the four-lap 10km bike leg.  The pair were followed by Arne Post and Maxim Kuzmin, with Daniel Antonioli and Konstantin Lavrentyey following closely behind.

Svanebo and Andreev stayed together on the bike until the third lap when the Swede began to slowly break away- putting a 15 second gap between himself and the young Russian. Maxim Kuzmin worked alone on the bike trying to catch the leaders. Former world champion Arne Post suffered on the bike, losing time to the leading group. Halvor Bjornstad and Evgeny Kirillov worked together to bridge the gap on Post.

After the final bike lap Svanebo had stretched his lead on Andreev to 35 seconds. Maxin Kuzmin was another 25 seconds back, followed by Bjornstad, and Antonioli. Lavrentyev. Sigi Bauer and Arne Post came into the second transition from bike to ski together almost two minutes behind the leader.

Svanebo never looked back once he got on the cross country ski leg and held his lead all the way to the finish line to emphatically take his first world championship title. Tor Halvor Bjornstad relied upon his traditionally strong cross country ski to catch Andreev, who was beginning to fade on the final leg. Halvor Bjornstad comfortably took second place with Andreev holding on for the bronze.

“I felt pretty good during the race, the run was just ok, but the bike was amazing for me”, said an excited Svanebo after the race. “I was in excellent shape for today’s race and I’m delighted with the win”. 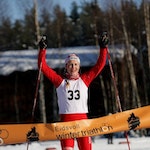 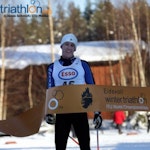 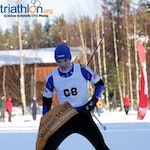 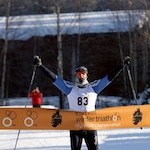 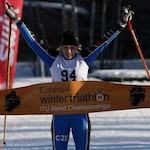 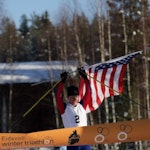 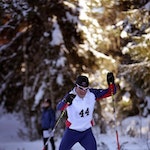 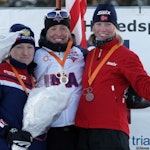 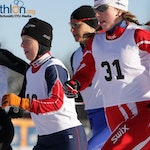 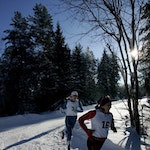 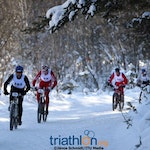 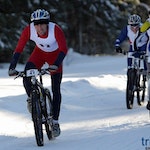