2012 Auckland Grand Final Preview: What's in store for the week 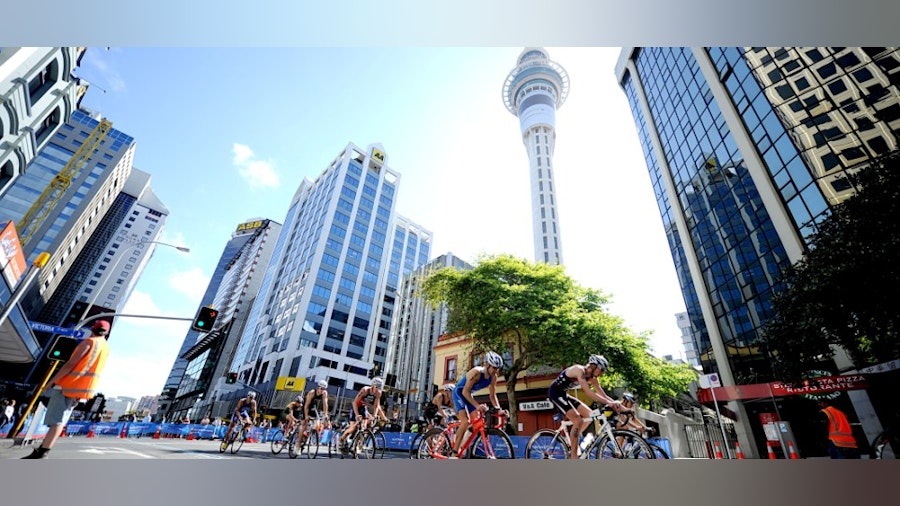 The 2012 season has produced endless action, including photo finishes at the London Olympic Games and a final flurry of changes to the ITU World Triathlon Series leader boards in the last two races. Now it’s time for the season to come to a close, but not before the riveting crowning of the World Champions at the Barfoot &Thompson ITU World Triathlon Grand Final Auckland. While all eyes will be on the elites, upwards of 3000 athletes will descend on Auckland, making this Grand Final one of the biggest yet. Here, we bring you the highlights so you can keep up with all of the action.

Elites
With incredibly close overall series rankings in both the men’s and women’s competition, the elite races are set to be a clash of the titans. Jonathan Brownlee (GBR) will attempt to keep the ITU World Championship crown in the family, but not without intense pressure from two-time world champion Javier Gomez (ESP). Despite an ankle sprain that stalled his training leading into Yokohama, the Spaniard overtook Alexander Bryukhankov (RUS) with silver in that race to cut Brownlee’s to just 180 points. With older brother Alistair absent from the lineup, only time will tell if a rested Jonny will earn his first elite world title. Anything will be possible on October 21. Click here for the elite men’s start list

On the women’s side, the showdown set for October 20 looks more and more like the final minutes of the London Olympics with Erin Densham (AUS) and Lisa Norden (SWE) battling for the title. Densham started the season on top, but Norden claimed the last two series titles. However, neither of the Olympic medallists raced in Auckland last year where New Zealand’s own Andrea Hewitt conquered the course for gold. Hewitt was leading the series until she sat Stockholm out. The Kiwi will need a massive race to take the title, but all bets are off in Auckland. Click here for the elite women’s start list Under23
On October 20, the Under 23 men’s and women’s races will be contested over the same course as the elites, and is heaped full of triathlon faces of the future. Vincent Luis (FRA), who recently secured bronze in Stockholm, headlines the men’s race followed by Fernando Alarza (ESP). Igor Polyanskiy (RUS), whose brother will line up with the elites, is also a rising star to watch. A host of impressive ladies will start, including Maaike Caelers (NED), who recorded top three finishes in the last two WTS events. She will face opposition from the likes of Non Stanford (GBR), Claudia Rivas (MEX), and Emmie Charayron (FRA).
U23 men start list
U23 women start list

Juniors
The junior races will be decided on October 21, the same day as the elite men. The juniors will feature a diverse array of young talent from several countries. Thirty-two National Federations (NFs) are represented in the men’s race, while 29 NFs are represented from just 39 women’s slots. Juniors will race on a similar course as the elites, but over half the distance for a furious all-out sprint. Mikayla Nielsen (NZL) returns on home soil to defend her junior women’s title, while men’s 2011 bronze medallist Tony Smoragiewicz (USA) will line up at for a chance at the title this year.
Junior men start list
Junior women start list

The course
The elites will complete one swim, eight bike and four run laps in the hunt to name themselves the 2012 ITU World Champion. New Zealand showcases one of the most challenging bike courses on the ITU calendar. The eight-lap course features three hills on each loop. Athletes will climb a gradual 50 metres over nearly a kilometre, immediately followed by a shorter, but steeper 30m climb. To finish off the legs, athletes are met with another small slope, before repeating eight times. There’s no doubt about it; the world championship crown is in the hills. Click here to see the course map

Paratriathlon
This year, the ITU Paratriathlon World Championships will see record participation with more than 100 paratriathletes across 20 National Federations slated to compete. Participation is up more than 25% from the 2011 World Championships in Beijing. Six categories will be contested on October 22 over a 750m swim, 20km bike (handcycle/tandem), 5km run (wheelchair) distance. Great Britain reigned supreme in Beijing, claiming the top two spots in four of the classifications. They return a strong team this year, but it’s anybody’s race. Read up more on the paratriathlon races Aquathlon
The ITU Aquathlon World Championship will set the tone for the week, as it is the first race to go off on October 17. A quick 1km swim and 5km run, some athletes may use the aquathlon as a warm-up for their triathlon races later in the week. A record high 753 athletes will travel to New Zealand for the swim-run battle. In the elite races, three-time aquathlon world champion Richard Stannard (GBR) is back to defend his title but will face opposition from Olympian Richard Varga (SVK).  A new champion will be crowned in the women’s race but Nicky Samuels (NZL) will be the crowd favourite. Click here for more aquathlon information

Age-group
More than 3,000 competitors are ready to race in Auckland – one of the highest numbers of age-group athletes at an ITU World Championship to date. The number is an increase of nearly a thousand entries from last year in Beijing. Athletes opt between an Olympic and sprint distance race, both they can’t do both, as each will be contested on October 22. Click here for race information

ITU Congress and Event Expo
While the focus is on fast racing in the home of the Kiwis, a host of other events will take place alongside the competition. Following the opening ceremonies on October 18, ITU committee, commission, and executive board meetings will begin with the goal of evaluating the direction of the sport. After the races, continental confederation meetings and ITU Congress will be held to decide the federation’s leadership for the next Olympic quadrennial. In addition to all of the meetings, the ‘World Tri Sport and Lifestyle Expo’ will open on October 16 and will be held throughout the whole festival week until October 21. The expo will feature the latest triathlon products and services. Don’t miss it!

Couldn’t make the trip to Auckland? Not to worry, ITU has you covered. Not only can you follow the races at triathlonlive.tv and on twitter @triathlonlive, there are a number of ways to watch from your own home. Check triathlon.org tomorrow for all the ways you can catch the action from the comfort of your own home.