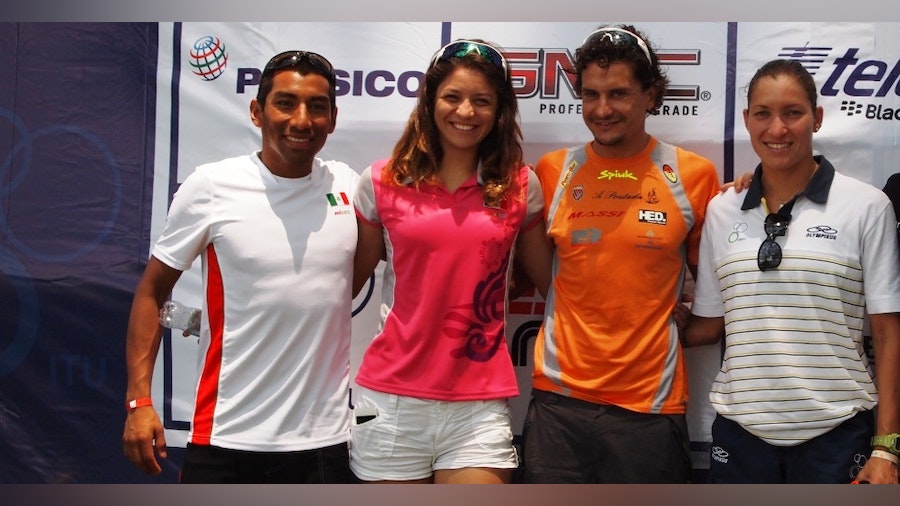 Past world champion Ivan Rana (ESP) and 2011 Pan Am Games bronze medallist Pamela Oliveira (BRA) joined Mexico’s Claudia Rivas and Crisanto Grajales in the Huatulco heat to speak with the media ahead of the third stop of the 2012 ITU World Cup season. The athletes made one thing clear on Friday: qualifying for the Olympics is everyone’s top priority.

Claudia Rivas (MEX)
On the importance of the race
“The competition on Sunday is very important for us. Many competitors are very strong. Many people are here to qualify and earn points for a place at the Olympics. I hope I will be able to continue to maintain Mexico’s standing (in the Olympic rankings).”

On why she enjoys competing in Huatulco
“I like the Huatulco race a lot. I like the bike portion of the race. It is one of the hardest triathlons of the season, not only because of the bike, but also because of the heat. The heat is very intense. It is very difficult. For this reason, it is one of my favorite races.”

Pamela Oliveira (BRA)
On improving her performance from previous years
“My first race here in Huatulco was very bad. It was very hot and hard. The run changed everything. I think this year I am more prepared. I am thinner now and I think it will help me. This year my running has improved. I did my best World Cup finish last year at this race, and I think this year I can finish even higher.”

On her race condition
“I have to take advantage of how well I am racing right now because of the points for the Olympics. I want to secure the place and points for Brazil because I want to go to London.”

Ivan Rana (ESP)
On competing for a spot at the Olympics
“I think this race is going to be very difficult. We are in the final qualifications for the Olympics and there are many people who are working to gain points for a place at the Olympics. I am just two points out of the Spanish team. But, I like when you have to fight and you are really close to the others.”

On why the race course is beneficial for him
“I think many people came here because, like Claudia, they like the course. In my case, I have a problem with my foot and I think most people will run slowly after such a difficult bike. We will be destroyed after the bike, but that is good for me.”

Crisanto Grajales (MEX)
On why Huatulco is an ideal race for the Mexican National Olympic Committee
“I think, more than anything, many of us came to race here because of the heat and the difficulty of the race. Many countries came to secure a place for the Olympic Games. We have three Mexicans in the men’s race. We all want to go to the Olympic Games. Our main concern is to conserve the places we have for the Olympics because there are just three qualification races left - Huatulco, then San Diego and Madrid.”

Hosting an ITU Triathlon World Cup for the fifth consecutive year, Huatulco is considered one of the toughest tests on the entire ITU circuit. From a standing sprint beach start athletes begin with a two-lap, 1.5km swim in beautiful Santa Cruz bay.  Athletes then embark on a gruelling eight-lap 40km bike course through the centre of town, which includes a punishing 24% grade hill and some technical turns on each lap.  The race finishes with a four-lap 10km run with two hills on each lap.

The elite women start at 08:00 local time, while elite men begin at 10:45 on Sunday 6 May.  Follow the action with live timing and text updates at triathlon.org/live.