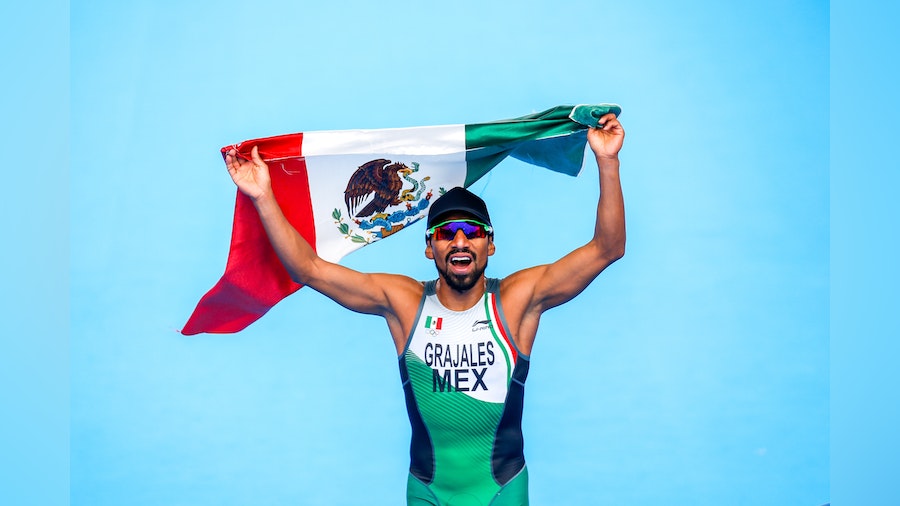 Lima, Peru, set the scene as top athletes, of the Americas, lined up to contest in the 2019 Pan American Games.

2015 Pan American Games champion Crisanto Grajales from Mexico was back to defend the prestigious title.

A strong group of elite men exited the water together and out into the open water for the second lap of the 1.5km swim.

USA’s William Huffman, Canada’s Charles Paquet, Chile’s Felipe Barraza and Diego Moya were the first of the men into transition and out on the bike course. A string of nearly 20 men were on their tails as they produced quick transitions to commence the bike portion of the race.

In the early stage of the bike leg the chase group latched onto the leaders and formed a group of 25 riders, each taking turns in the front seat.

The lead group had all the race contenders, including the Mexican trio Grajales, Irving Perez, Edson Gomez, Huffman, Messias and Kaue Willy from Brazil, Luciano Taccone from Argentina and Barraza.

Brian Moya and Carlos Javier Quinchara Forero from Columbia worked together to chase the leaders but didn’t have the speed or leg power to match the front group. The duo were a fair way back off the pace.

Willy tried to make a break and establish a lead on the group but the strong athletes quickly caught up with the Brazlian and the group remained unstuck.

It was evident that it was going to come down to a brutal running race, especially with the likes of Messias and Grajales positioned in the mix.

Taccone was the first to rack his bike, change shoes and start the run. Messias, Huffman, Grajales and Moya from Chile were hot on his heels.

Pacquet and Perez lost grip but only for a moment before the group formed again, just as they had on the bike.

The group run together across the course and it was only a question of time before one of the front runners would strike.

With one lap to go it was Messias and Grajales who attacked and there was a battle up front.

A medal was going to be awarded to a man in this chase group but it was up for taking at this stage.

With the finish line of the 2019 Pan American Games in sight and in a powerful chase for the gold medal, the athlete wearing number one in the field proved his worth. With an impressive surge to the finish, Crisanto Grajales won the run and held onto the Pan American Games title.

“This is my second Pan American win. I trained very hard for this race and I am very happy for my country.

“It represents all the work I did over the past years. This also means that I have to keep working to prepare for the Olympic test event in Tokyo and the Grand Final in Lausanne.

“We did an amazing job. Together with my team-mate Edson Gomez we felt confident about our tactics that worked very well. He needed to push on the bike portion to avoid breakaways, I had to take care of the running.

“Messias was my strongest rival here. I knew that the 5km, point of the running leg, was the turning point of the race. We were both suffering on the last lap, but the finish is always a matter of mental strength,” champion Grajales said.

Manoel Messias showcased an impressive race combination to sprint to the finish and earn the silver medal for Brazil.

“I didn’t expect this at all. Irving Perez is a fast runner and it was a surprise to me. But on the last lap we could not break away really from the group. I prepared a lot for this race and I trained a lot at altitude. It is important for triathlon in Brazil. We have a great day at triathlon.”

Luciano Taccone from Argentina bolted down the finish strait to be awarded with the bronze medal.

“I feel pure joy, it’s a dream come true. It was a goal that I had right from the start of the competition. I knew it would have been hard until the end, but I’ve prepared for this and luckily I have achieved it.”

Mexico’s Irving Perez produced an outstanding race display to cross the finish line in fourth place and William Huffman made it through in fifth position.