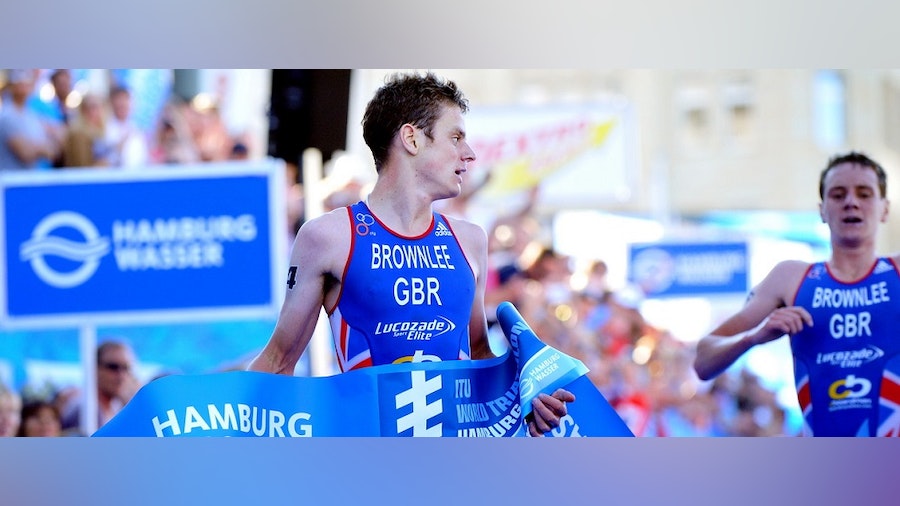 I thought it was going to be Alistair’s day – I thought I’d never beat him. He’s gone into this pretty unprepared but I knew I had to give everything,” Jonny said.

He was hanging on through the whole run. Alistair doesn’t like to run behind people, he likes to run upfront. I got to the last bit and he got past me. I was pretty feeling comfortable. I was thinking the whole way round I couldn’t remember if I was meant to finish on the right hand side or the left hand side but it was all good.”

The Brownlee brothers and Javier Gomez (ESP) dominated throughout and were still shoulder to shoulder as the race entered the last kilometre of the 5km run. Gomez started to fall back as the Brownlees upped the pace and it looked like Alistair would claim his first victory in Hamburg, edging ahead of Jonathan in the closing stages.

“I think I went a bit too early on that last corner. I was a bit confident but Jonny’s a clever old sod and he kept a bit back,” Alistair said.

But younger brother Jonathan found one final burst of energy on the blue mat to snatch victory in a blistering 51 minutes and five seconds. Alistair registered the same time to claim silver, while Gomez finished in 51:14 for bronze. In doing so Gomez maintain his position at the top of the rankings.

With nine of the top ten ranked athletes appearing in Hamburg, it promised to be a strong race, which proved to be the case from the start in an extremely fast swim. Richard Varga (SVK) was first out of the water in 8:42, closely followed by Henri Schoeman (RSA) and both Brownlee brothers.

Hamburg signalled the first time the Brownlee brothers and Gomez – medallists at London 2012 – had competed against each since the Olympic Games. The trio are also the only athletes to have won a WTS event in 2013 and it didn’t take long before the three were in prime position for the podium again.

By the half-way stage of the 20km bike, the Brownlees and Gomez formed the front of a breakaway group of nine which had created a 20-second lead. Alessandro Fabian (ITA) and Ryan Sissons (NZL) were also part of the leading group, with Fabian edging in front as the pack began the third of four laps.

“I wanted to get away on the bike and push on and we managed to do that but the other guys in the group didn’t work with us,” Alistair Brownlee said. “If any of them want to learn how to ride a bike, ring me up and I’ll give them some tips because they didn’t know what they were doing out there today.”

The nine-strong group entered transition together, with the Brownlees, Gomez and Schoeman gaining a few metres advantage in the early stages of the 5km run.

Gomez, who won the Hamburg race in 2010, continued to stay with the British brothers as they quickened the pace in the last kilometre before the brothers’ epic finale. His third place performance was the fourth time he’s made the podium in Hamburg.