by Merryn Sherwood on 31 May, 2014 11:50 • Español
Spain's Mario Mola captured his first ITU World Triathlon Series win in dramatic style in London, pulling out a perfectly time sprint to hold off training partner Richard Murray in the final...

Spain’s Mario Mola captured his first ITU World Triathlon Series win in dramatic style in London, pulling out a perfectly time sprint to hold off training partner Richard Murray in the final 100 metres of the race.

Mola was quiet throughout the swim and the bike in the sprint race in Hyde Park before coming to the front as part of an eight man lead group at the start of the 5km run. But as others tried to break the field early, including both Alistair Brownlee and Javier Gomez at different stages, Mola waited patiently until the final finishing chute. It was Murray that reeled in Brownlee first, but then had to contend with Mola on his shoulder. As they exhausted everything in the dash to the tape, it was Mola that found that extra level to claim his first career series win in a total time of 49 minutes and 46 seconds.

“I try to do everything that’s possible in every race,” Mola said. “Today I was lucky to be fighting at the end. I’m very happy. I’m sure that people have enjoyed the race here at home.”

It was the second consecutive podium place for Murray, who collected bronze in Yokohama. The final place on the podium was reserved for a new talent in Portugal’s Joao Pereira.

“It was an incredibly hard race! It’s the first time I’ve been on the podium since 2010 so obviously I am very happy about that,” Pereira said. “When I saw Ali go for the sprint I thought ‘just go for it’ and with about 10m to go I managed to catch him. It was so hard but the opportunity to get on the podium was so amazing I just gave it everything.”

A regular on the WTS circuit for the past two seasons, Pereira had recorded consistent a number of top-10 results, including a 10th in last year’s Grand Final. But this year he proved he is one to watch on the Road to Rio, outsprinting Alistair Brownlee to claim his first series medal.

Earlier in the day, a very speedy swim saw Richard Varga, Dmitry Polyanskiy and Aurelien Raphael get out of the one-lap swim with a handful of seconds to their advantage. But a massive school of men behind them that was headed by Jonathan Brownlee, Javier Gomez and Alistair Brownlee quickly shut that lead down early in the bike.

In an effort to create distance between themselves and running speed devils Mario Mola and Richard Murray, half the pack pushed the pace to split the men’s field on the first two laps of the bike.
But with a determined Murray at the helm of the chase, that lead had dwindled to just six seconds allowing for them to bridge up on the third of four bike laps.

That put all the major contenders back into the lead group ahead of T2 and it didn’t take long for the same five men that put on a show in Yokohama to hit the front. Except this time, Portugals Joao Silva, Joao Pereira and Australia’s Ryan Bailie joined them. Together that group of eight set a scintalling pace for the first of two short 2.5km laps. While various tactical moves played out over the next 2.5km, the podium didn’t unfold until the final 200m metres, where Mola entered history as a WTS winner.

Mola’s win also marks a changing of the guard in London, as previously only Gomez and Alistair Brownlee had been victorious on the Hyde Park course. It’s been more than 18 months since a man other than Brownlee or Gomez has topped a World Triathlon Series podium. Mola’s gold also brought to the end the best winning streak in WTS history for Gomez, who had been unbeaten since last year’s Grand Final. However his sixth place was enough for him to keep his lead in the Threadneedle rankings. 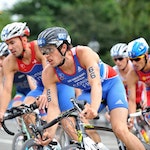 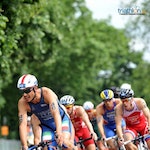 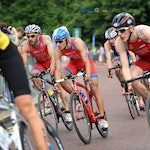 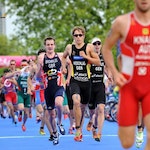 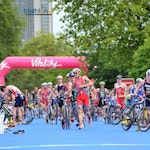 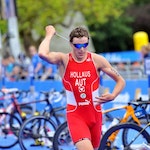 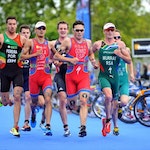 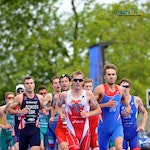 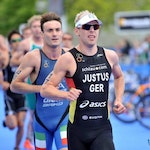 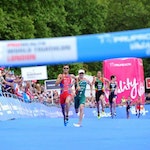 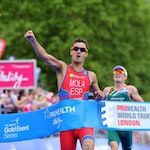 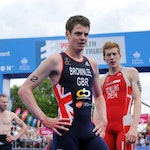