Polyanski brothers prohibited from racing together - An April Fool

VANCOUVER-  April 1-  After extensive scientific research the International Triathlon Union announced that the Polyanskiy Brothers - Dmitry and Igor are no longer permitted to race together in the same ITU sanctioned event. It has been determined that the siblings have an unfair training and competitive advantage over their rivals.

“We have conclusively shown that the brothers, due to their unique training and living situation, have a statistically significant advantage over fellow competitors. It has been widely know for a long time that Russian siblings have a unique advantage over other sibling pairs from different countries due to unique genetic factors. The results are based on months of scientific research and show that the brothers have a 23.45% advantage over athletes without a sibling competing in the same race” said Dr Henry Wiseburg– chairperson of the specially formed ‘Polyanskiy Commission’.

The study was conducted by a leading team of scientists in the field of ‘Sports Siblings’ at the Polyanskiy training base in the Ural mountains. The study began shortly after the brothers excellent performance at the 2012 Tongyeong World Cup in which the pair claimed gold and bronze medals. It tested the brothers’ ability to perform across a series of tasks, both as a team and as individuals. Physiologically it was determined that there was no statistical difference if they competed together or separately. However empirical evidence showed that the pair has a significant mental advantage when together. 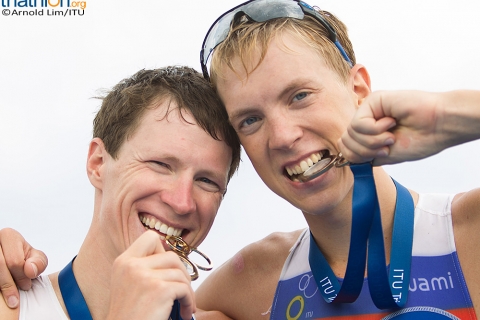 The brothers were tested across a series of tasks both sport and non-sport related and proved that when together, the pair performed considerably better. During the study the pair’s athletic performance was monitored and they came first and second in 100% of local events they competed in. The win ration dropped dramatically to 70% when they competed separately. The study also looked at archive data to determine their athlete’s performance as a team or individuals and the data was consistent.

“Even causal tasks like going to the shop to pick up the groceries showed a remarkable improvement. We noticed that Igor would regularly forget to pick up necessary items such as the milk or a packet of biscuits when he was on his own, but when Dmitry accompanied him the pair completed the shopping list almost 100% of the time”, Dr Wiseburg continued.

“While this might not seem noteworthy – imagine the implications of this in a race situation – and if say, Igor was to forget his running shoes or his bike? The advantage of having a sibling there to assist you cannot be underestimated”

The Polyanskiy’s will now have to alter their race schedule to race at separate ITU races. It will be up to the brothers to determine who races in which race. The bothers have not announced their updated race schedule yet, but were scheduled to race at the San Diego World Triathlon Series event together.

Studies are also under way in an unknown Russian location to see if the Bryukhanov bothers have a similar advantage.

Click here to read the full scientific report and statement from ITU.