Two-time Olympic gold medallist Alistair Brownlee (GBR) did what he does best when he kicked off the action at the 2016 ITU World Triathlon Grand Final Cozumel with a win at the Aquathlon World Championships. Set over a 2.5km run, 1km swim, 2.5km run course, Mariya Shorets (RUS) took home the world crown in the women’s race.

Men’s Review
To the surprise of many, Brownlee lined up next to training partner and four-time Aquathlon World Champion Richard Varga to contest the first race of the World Championships. Brownlee blasted away from the starting line with a pack laced with talent including Mexico’s own Crisanto Grajales, USA’s Tommy Zaferes, Germany’s Steffen Justus & Russian brothers Dmitry and Igor Polyanskiy.

“Defintely my first ever run, swim, run,” Brownlee said. “I really enjoyed it, it was hard, really hard. It’s so hot, the running was tough. The other guys went off really hard and I thought ‘I better go with them’. It was weird, it’s not like I was tired, but I felt like I was in oxygen depth the first kilometer after the swim.”

Swift on their feet, Brownlee and Grajales ditched the competition on the first run lap, heading to the crystal clear waters of Cozumel first. Despite having a 15-second deficit, Varga, who has led out of the water at every World Triathlon Series race this year, and Zaferes caught and passed both Brownlee and Grajales.

Brownlee managed to hang on their feet to head out for the second run together. It wasn’t long before the recent gold medallist Brownlee took off to add yet another accolade to his name. Varga crossed over next, while Zaferes won bronze.

In the men’s U23 race, Turkey’s Jonas Schomburg won his first-ever world title in the event, while Richard Allen (GBR) and Leong Tim Law (HKG) completed the podium with the silver and bronze. While during the junior race, Michal Oliwa of Poland took home the gold, with Alexis Kardes of France earning silver and Jose Gabriel Solorzano (VEN) claimed bronze.

Women’s Review
In the women’s race, Shorets dominated the run, swim, run course from line to line for her first world title. She took off on the first run, served a 10-second time penalty for missing the athlete briefing, jumped in the swim and clenched the win when she accelerated over the finish line in first.

Shorets led a 1-2-3 Russian podium, as Anastasia Abrosimova crossed over in second, followed by Valentina Zapatrina.

“I’m very happy to be World Champion, and very surprised,” Shorets said. “It was very strange that I was leading after swimming. I’m really happy, this is good for my mind.”

The women’s U23 race saw another Russian claim victory when Anatastasia Gorbunova crossed the line first. It was Canada’s Severine Bouchez who finished with the silver and Ivana Kuriackova (SVK) with the bronze. For the junior race Aussie Elle Leahy beat out the field for the world title, while the podium was finished off with Simona Simunkova (CZE) getting the silver and Anastasia Shorets, younger sister of elite champion Mariya, with bronze. 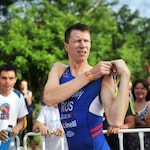 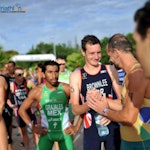 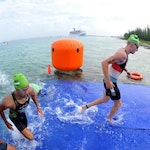 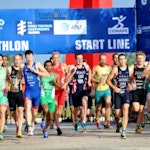 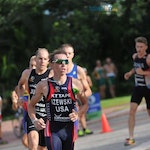 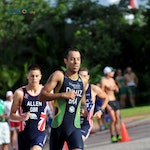 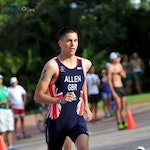 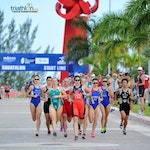 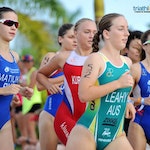 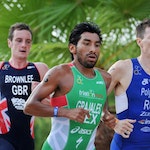 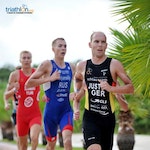 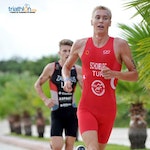