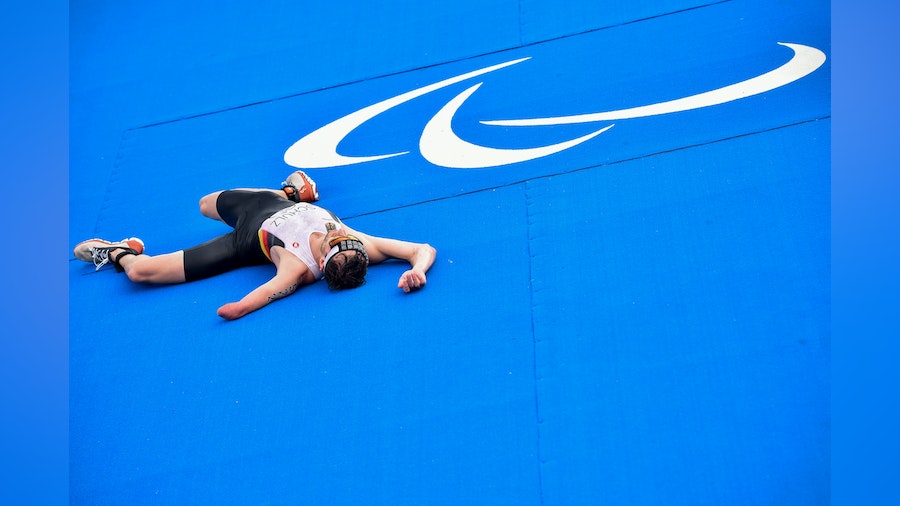 The best para triathletes of the world are ready to take the main stage at the incredible Yas Marina Formula 1 circuit for the World Triathlon Para Championships, hosted for the first time ever in Abu Dhabi. Only two months after the Tokyo 2020 Paralympics crowned the world’s best, over 120 para athletes will compete this Friday in six medal events per gender, with 12 World Champions to be crowned. The athletes will be racing in the same circuit as the elites only some hours later, with the World Championships to be disputed in the regular sprint distance and in weather conditions similar to the ones they had this summer in Tokyo.

PTVI
Wearing number 1 on the men’s Visually Impaired class (PTVI) will be British Dave Ellis, looking for some redemption after his disappointing DNF at the Tokyo Paralympics that left him out of a medal dreamed for so long. One that can opt always for a podium at the World Championships is Spaniard Hector Catalá Laparra, with a different guide than the one who got with him a silver medal at the Tokyo Paralympics, and ready to show that he is still the current World champion. Kyle Coon (USA) and the Irish Dinnacha Mc Carthy arrived to Abu Dhabi in great form, and are more than willing to claim their first world championships medal. The category will be packed with action, with three new athletes joining the top world field: Oscar Kelly (GBR), Owen Cravens (USA) and Oliver Gunning (IRL), ready to have an early start for the Paris 2024 qualification.

On the women’s field, the clear favourite is the current Paralympic and twice world champion Susana Rodriguez (ESP). Even though she has not been able to train a lot in the past few weeks, the Spaniard lives to race in hot and tough conditions like the ones in Abu Dhabi, and her run will be really hard to beat. She will have to keep an eye for Alison Peasgood, who seems to be back in form after her disappointing fourth place in Tokyo. The athlete from the Russian Federation Ksenia Vibornykh, American Elizabeth Baker or Italian Anna Barbaro can always be medal contenders, especially if it all comes down to the run segment of the race, but they all will have to prove that they can perform under the usual desert heat of Abu Dhabi.

PTWC
Dutch para triathlon super star Jetze Plat seems unstoppable and only a major mistake will likely prevent him from taking his sixth consecutive world title in the wheelchair class. The double Paralympic champion (gold in Rio 2016 and Tokyo 2020) hasn’t lost a race since 2015, and is quite unlikely that this would be the first one, but until the athletes will cross the finish tape anything can happen. Main contenders for Plat will be his teammate Geert Schipper, looking to finish the season in good vibes after his disappointing 4th place in Tokyo, Florian Brungraber (AUT), Giovanni Achenza (ITA) or Ahmed Andaloussi (FRA) but they should all keep an eye on the new generation of athletes, like Mark Millar (IRL), who has been progressing a lot in the last few races, claiming silver in Alhandra World Triathlon Para Cup just a few days ago.

On the women’s side, Lauren Parker (AUS) is the one to beat. She seems to be still in shape after Tokyo, where she lost the sprint for gold, and looks stronger than ever. She has proven to perform alright under extreme weather circumstances, and that will play a major card this Friday during the races. But also used to deal with heat and warm water is Spanish Eva Maria Moral Pedraza, bronze medallist in Tokyo, looking out to finish the season with another podium at the Para Series. If Jessica Ferreira (BRA) has progressed in her recovery after an injury prior to the Paralympic Games, she could be a podium contender, while Frenchwoman Mona Francis will be seeking her chance to surprise the top athletes.

PTS2
Jules Ribstein (FRA) is the clear favourite to claim the title in the Men’s PTS2 class, if he can show again the top shape he showed in Alhandra last week. Maurits Morsink (NED) is always a tough one to beat, but with high temperatures like the ones expected in Abu Dhabi, his impairment is in disadvantage. In one of the more open races ever for this class, Lionel Morales (ESP) and Vasilii Egorov (RTF) can always be on a position to fight for the podium. But most eyes will be set indeed in Mohammed Lahna (USA), returning to the para triathlon world stage after almost three years not racing. If he is fit and he hasn’t lost the transitions training, he can be up fighting for the top positions.

Hailey Danz (USA) will be the one to beat in the women’s PTS2 class, but she should keep an eye on Veronika Yoko Plebani (ITA), who has improved significantly in the last months and is now a podium contender in all races, and willing to finish her season up high after grabbing a bronze medal in Tokyo. After missing Tokyo due to a last minute injury, Liisa Lilja will try to claim another world title, while British Fran Brown can always fight for that if she is back in shape as she was before the pandemic.

PTS 3
With only three women competing in the PTS3 class, Elise Marc (FRA), Andrea Miguelez Ranz (ESP) and Evgeniya Koroleva (RTF) will just have to decide whoo takes which spot on the podium, but chances are that the Frenchwoman claims another world title under her belt.

On the men’s side, Nico Van Der Burgt (NED) will be looking to de-throne Spaniard Daniel Molina, multiple times world champion and trying to start the new Paralympic cycle with the goal set in Paris, hoping that this class will get a chance of being included in the Paralympic programme for Paris. Korean Hwang Tae Kim will be another one to watch, especially on the run.

PTS 4
The Men’s PTS4 class will be one to follow up close, with 14 athletes lining up and most eyes set on the clear favourite: Alexis Hanquinquant (FRA). The Frenchman, Paralympic champion and current world champion, has won every single race he has started since 2019, and seems likely that his winning strike will continue in Abu Dhabi. Hideki Uda (JPN), Michael Taylor (GBR) and Alejandro Sanchez Palomero (ESP) seem to be the stronger ones on the field, but with most of them not really used to the heat conditions here and not able to train a lot since Tokyo, the race is more open than ever.

On the women’s field, only three athletes will start this Friday, so it will be a matter of just deciding positions on the podium between Spain’s Marta Frances Gomez, Elke Van Engelen (GER) and Kelly Elmlinger (USA), the clear favourite after being one of the very few athletes that managed to classify for the Tokyo Paralympics on a class higher than hers.

PTS 5
Two-times Paralympic champion Martin Schulz (GER) seems to be quite in shape again, after winning as well the European Championships in Valencia three weeks ago. But Spaniard Jexp:tag_this}Jairo Ruiz Lopez{/exp:tag_this} is willing to prove that his disappointing race in Tokyo, out of the medals, was just a bad day in the office for him. Some of the new generations of PTS 5 athletes are coming strong, like Carlos Rafael Viana (BRA), Filipe Marques (POR), Ronan Cordeiro (BRA) or Chris Hammer (USA) and can always be great podium contenders.

it is likely that Claire Cashmore (GBR) and Grace Norman (USA) will battle for gold once again in the women’s PTS 5 class. Bronze and silver at the Tokyo Paralympics, seems unlikely that any of the other athletes can run faster than the two of them, so expect a close finish between the two friends.

Para triathletes will take the stage on Saturday, November 5th, from 8am local time, and all races will be available live and on demand on triathlonlive.tv