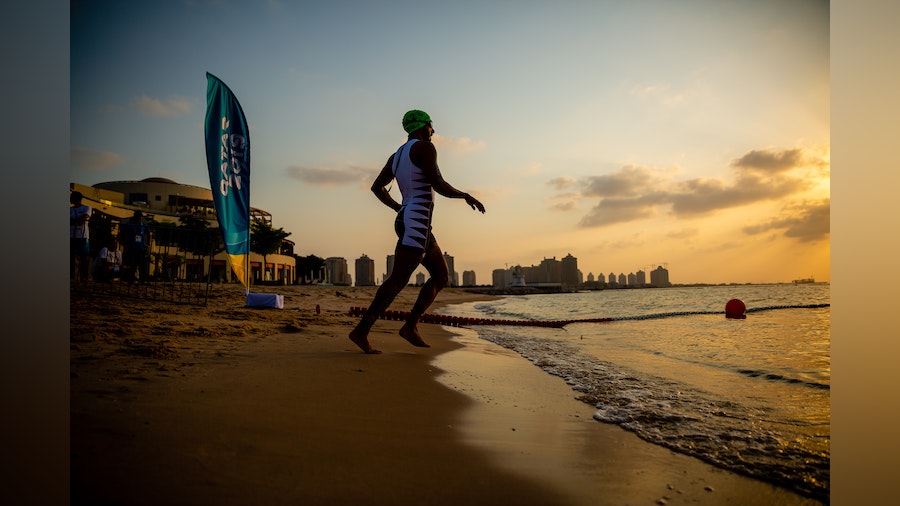 World Triathlon is pleased to announce that the Association of National Olympic Committees (ANOC) has announced that Aquathlon is included in the 9 sports and 10 disciplines which will form the core programme for the 2023 and 2025 ANOC World Beach Games.

Aquathlon made its debut in the first-ever edition of the ANOC World Beach Games in Doha 2019, and will continue to be included in the programme in the next two editions of the Games. The 2023 edition have the dates pre-set at 24-30 September 2023, and the host city will be announced shortly.

Aquathlon is planned to continue with the same format as in Doha, with three medal events -elite men, elite women and 2x2 Mixed Relay-. Athletes will compete on a 5km run, 2k swim and a final 5k run for the victory, while for the Mixed Relay event, each athlete will do a 1.25k run, 500m swim and another 1.25k run, with teams formed with a man and a woman from the same country, and each athlete to do the distance twice. 60 athletes in total -30 men and 30 women- will participate in the Beach Games, and the qualification process will be released shortly.

The 10 core disciplines included in the programme for the ANOC World Beach Games are the following: Aquatics – Open Water 5Km; Aquatics – Beach Waterpolo; Beach Wrestling; Beach Soccer; Beach Volleyball 4x4; Beach Handball; Beach Tennis; Aquathlon; Kite surfing and Beach Kata. In addition to the nine core sports, at each edition of the Games there will be the option to add additional sports in agreement between ANOC and the respective Organising Committee. This will allow the programme to be tailored to the trends and cultures of each host county ensuring a unique feel for each Games

“It was in a beach where triathlon was born in 1974, a race that started with a run, followed by swim, bike and run again. And that’s pretty similar to what our athletes do in Aquathlon, so I am extremely pleased to see the discipline considered in the core programme of the ANOC World Beach Games”, said World Triathlon President and IOC member, Marisol Casado.

“We have been part of this project, the ANOC World Beach Games, since its inception. The first-ever edition in Doha was a great success and we showed the world the possibilities and beauty of Aquathlon, and is great to have that chance again in 2023 and 2025. To be able to have Aquathlon included in the core programme will indeed mean an incredible boost for one of our most recent disciplines, and it will mean a great increase in the number of athletes regularly competing in our events and enjoying the possibility of participating in great multisport events as those Games will be”, she said.

“We are delighted to announce the core sports for the next two editions of the ANOC World Beach Games. We have a dynamic and diverse mix of youth-centred beach and water sports which will ensure the ANOC World Beach Games continues to allow NOCs to engage new athletes and a new generation of sports fans. By confirming the core programme now, we are also giving NOCs and International Federations greater certainty and time to plan for the Games,” said ANOC secretary general Gunilla Lindberg said.

“After the success of Qatar 2019, we have enjoyed very positive collaboration with all the IFs that participated in the Games and we look forward to working closely with them to deliver fantastic competitions for our athletes and fans”, she said.