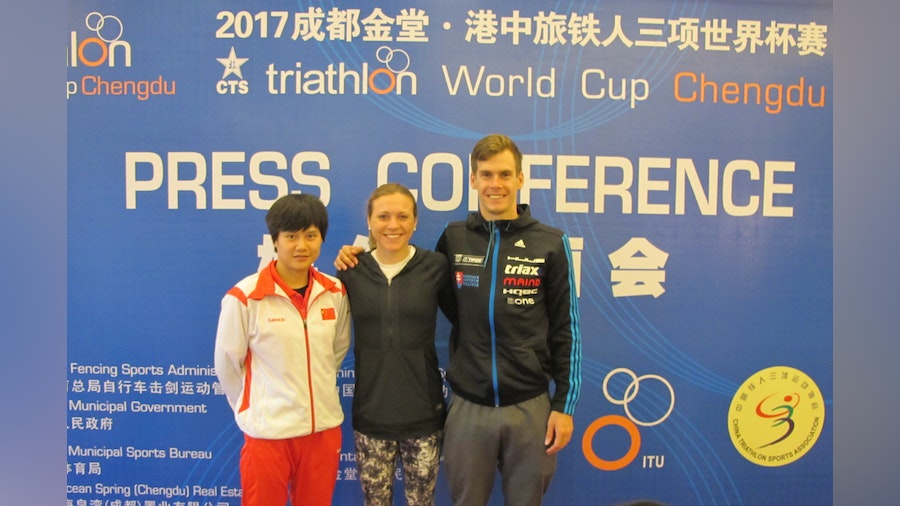 Great Britain’s Vicky Holland and Richard Varga from Slovakia will make their 2017 race debut at the 2017 Chengdu ITU Triathlon World Cup and along with local hope Zhang Yi from China, spoke to the media at the opening press conference.

Vicky Holland (GBR)
On the reasons behind choosing Chengdu super sprint for first 2017 ITU race:
“I like if possible to start my season with a sprint distance. I think it’s the best way to sharpen up some of your skills that might be a bit rusty from the off season, your transition skills, swimming in open water. This race in particular fitted really well with Yokohama being next weekend. So the race for me here in Chengdu will be a lead in race to the World Series race in Yokohama.”

On main aims of the 2017 season:
“As for this season, I think I’d really like to look at having a strong overall result on the World Series. My highest position in the World Series ever was a fourth place overall in 2015, so this year I hope to go at least one better and as such I need to do a full race season of World Series races and for me that will begin next weekend in Yokohama.”

Richard Varga (SVK)
On thoughts on super sprint distance and hopes for the race:
“I hope to get on the final podium, I have so far missed it for the World Cups and World Series, so I would like to build my confidence for this season here, starting with a really good result. I think this kind of race really suits me because it’s pretty fast, so I think it’ll be good for my confidence building up to Yokohama.”

On why he thinks super sprint distance is suitable for him:
“I come from a swimming background and short distances, so I think the fast twitch has stayed in me and I think that’s the biggest difference from the Olympic distance where you are racing for two hours. I think this will suit a different athlete, this shorter distance and maybe we’ll see some surprises.”

On tactics for the race:
“It’s two races, it’s not just one where one mistake it can change everything. So on the first day, Saturday, it will be sprint where I will try to just get qualified and conserve my energy and be really smart about how much energy I waste and just be good enough to get in the final. And I will use the energy that I saved for the final.”

Zhang Yi (CHN)
On the feeling of racing at home:
“The race is in my hometown, so I feel at home and racing under this new format, it is a new challenge for me. Even though I have competed in Chengdu many times before, each time I feel the great support from the crowd. It feels like I’m coming home, so I really hope I can perform my best here.”

The men will get the 2017 Chengdu ITU Triathlon World Cup underway with the first semi-final round taking place at 09:00 on Saturday, May 06, while the women will follow at 11:30 local time. The “A” Finals round will take place on Sunday, May 07 with the men starting at 10:05, with the women following directly after at 10:50am. Follow all of the action with live timing at triathlon.org/live and on Twitter @triathlonlive using hashtag #ChengduWC.