The athlete's thoughts on Hy-Vee

Here’s what a few of the top athletes had to say after the world’s richest triathlon at the Hy-Vee ITU Triathlon Elite Cup on Sunday.

“I raced my heart out. Hy-Vee is the best race out there. They put on an awesome show…and I won it.”

“This feels absolutely amazing. I felt great at the start of the run and just tried to hang on for the whole thing. I was really hurting to hold them off at the end.”

“I knew the guys were closing hard, but when I saw I still had 20 seconds heading into that last lap, I thought I could do it.” Don proved he is still a match for the best.

“I knew I had a big gap to make up when I got to transition, but I just started reeling them in one by one and before I knew it I could see the lead group,” Snowsill said.

“I was angry about my position, so I used that aggression” she said. “I wanted to reel in as many girls as I could.”

“I was a bit angry with myself because in the first lap of the swim I got annihilated. Maybe I have to use my elbows a bit more, or maybe it just took me a while to get back into race mode because I was certainly off the pace at the start.”

“I used that anger on the bike and tried to make amends for a poor start and for the disappointment of last year’s race here. A lot has happened over the past 12 months and a lot has changed, so it was a matter of bottling that up and using it as energy. We did get a bit of time back on the leaders at one stage on the bike, but I was still pretty worried at the start of the run when I heard I was so far back.”

“I caught them on the third lap (of the run) and I didn’t want to hang around that group for too long because I didn’t want to come down to a sprint finish. At that stage [Emma Moffatt] was my main concern, so I just kept going and tried to put some space between us and it seemed to work.” Australia once again showed their strength with three athletes on the podium.

“It’s always good to be in the front pack on the bike, but I don’t think we made the most of it and could have organised ourselves a bit better to put some more time on the rest of the girls. On the run, there were two U-turns on every lap so I could see Emma coming through the field pretty fast and there were also some good runners around me, so there was enough to worry about. Once Snowy caught me I tried to go with her, but that little campaign didn’t last long because she was absolutely flying.” 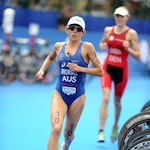 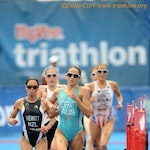 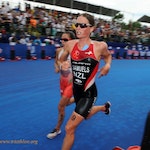 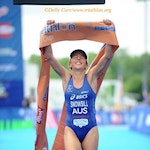 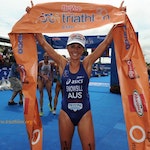 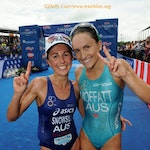 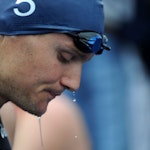 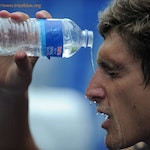 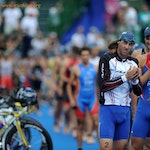 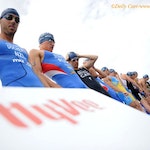 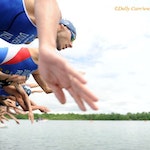 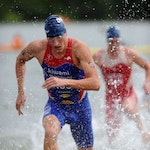