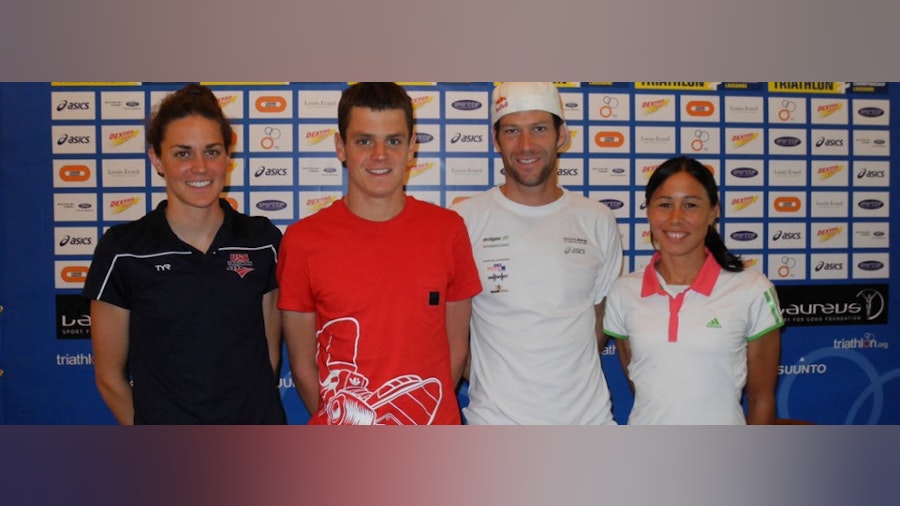 Some of the world’s best triathletes have thrown their support behind the team triathlon format, on the eve of the 2011 Team Triathlon World Championships in Lausanne.

This weekend’s world championships are the fifth edition of team triathlon, but it’s the third edition of the new game changing format. This version, held since 2009, is a mixed team relay format – with each nation fielding two men and two women. Each athlete completes a super sprint leg, which has been of varying distances in the first two years but on Sunday will consist of a 265m swim, a 5km bike leg and a super short 1.2 kilometre run. Adding to the intruigue is that teams can pick the order of their athletes but must be woman, man, woman, man which means the sexes could compete directly against each other. At the end, the first team’s anchor athlete over the line wins.

Hewitt said that tactics will become important throughout the relay.

“For my New Zealand team, I’m going to begin my relay, so for me I’m going to be with a lot of the other competitors, were just going to be racing as the first so it will be like a normal race but just a lot shorter. And then as the relay continues then there is a lot more tactics involved with one or two athletes racing each other to see who is going to be the champion,” she said.

Jonathan Brownlee emphasised the unexpected nature of the format, how everything can change in an instant.

“Great Britain have a really really strong team, it’s been set at the moment, well numbers have been set but we don’t know which order we are starting, we are going to decide that on Saturday evening,” he said. “So we have a really really strong team but it’s a relay, and it is such short distances so anything can happen, transitions are really important and because it is such a short run, anything can happen.

Riederer recalled his fond memories from last year when he celebrated down the finish chute carrying the Swiss flag and anchoring the Swiss team to its second consecutive Team Triathlon World Championship.

Jorgensen evoked a smile from the other competitors with a reminder of just how much the sprint can hurt, but also spoke about how great it was to be able to have male and female athletes in the same race.

“I’m really excited about the team event, I think its an awesome opportunity to get guys and girls to race together, I don’t really have any idea of what to kind of expect,” she said. “I mean it’s going to be really painful and fast so we are just going to go out there and do our best and have fun.”

The Team Triathlon format made its major games debut almost exactly 12 months ago at the inaugural Singapore 2010 Youth Olympic Games, with IOC President Jacques Rogge in the crowd. In that race, continental teams were formed from athletes that raced in the individual format and the gold medal was won by the Europe 1 team that included Eszter Dudas (HUN), Miguel Fernandes (POR) and Fanny Beisaron (ISR) and Alois Knabl (AUT).