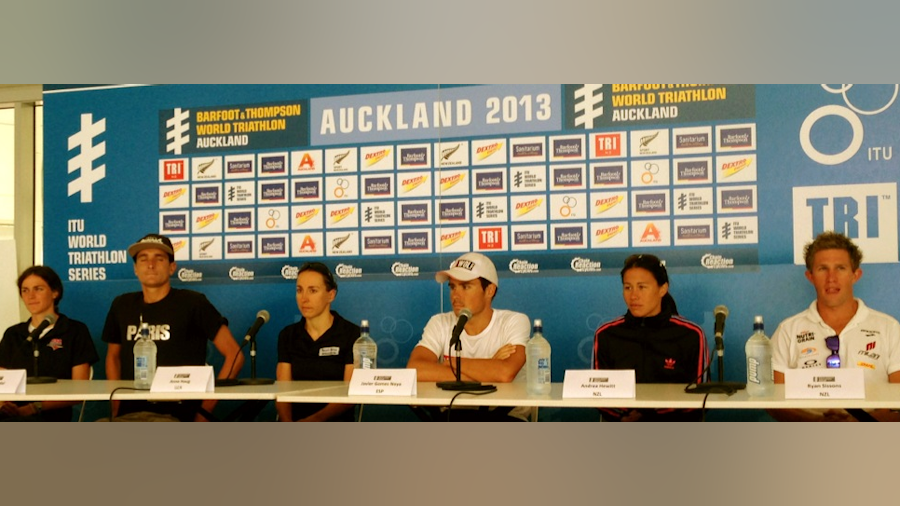 We begin the 2013 series the way we finished, in Auckland, New Zealand. A panel of athletes that included last year’s winners of the Grand Final, Germany’s Anne Haug and Spain’s Javier Gomez. New Zealand’s best, Andrea Hewitt and Ryan Sissons, rising American star Gwen Jorgensen and Frenchman Laurent Vidal also shared their thoughts and expectations for this weekend’s racing with members of the media today ahead of the 2013 Barfoot & Thomson ITU World Triathlon Series.

Javier Gomez (ESP)
What have you been doing since the Grand Final last year?
“Was doing some racing, some rest and then training again. It’s really good to be back here I have really good memories from this race. Last year was once of my best ones in 2012. It’s much better weather this time and hopefully everyone will enjoy a good show.”

On his great racing record in Auckland over the past decade. What do you put that down too?
“I don’t know, yeah its true; I have raced here three times and won three times. I have really great memories of all those races starting with a break through point in my career. Ten years ago winning the Under 23 World Championships and in 2008 had probably one of my best races ever in New Plymouth at the World Cup and last year was awesome too.”

What is the appeal of the Auckland Course?
“It’s a pretty challenging course all the athletes would agree that it’s a pretty difficult course, the bike course is very hilly, very technical with the weather conditions last year made it even more difficult and hopefully it will stay dry.”

“It’s a course you really have to work hard. You cannot just sit at the back of the group and do nothing. You have to go up those hills and be aware and ready for anything. Lots of things can happen.”

Anne Haug (GER)
How different is it now with the spot light on you?
“It’s much different, my career changed from one year to another. I feel everything’s is new and I get used to that.”

On form
“Yeah I was a little bit surprised after Mooloolaba. I didn’t expect that. It was my first race since Auckland last year. I knew that I had trained really good and because of my performance at the Grand Final last year. My training went well, I wasn’t injured, I wasn’t ill. Everything went pretty well.”

“Yeah, on the sport side of things it wasn’t really a good race here last year but I enjoyed the race. I know I can perform here on this course and it’s just a matter of finding the form but I’m really looking forward to racing.”

On the course
“It’s definitely a challenge and different to the flat courses they put on in other cities, so it’s great to be right in the middle of the city and have a course with the hills they’ve put in and being really technical. I think that’s why some athlete are scared and that’s why they are not here.”

On her form
“It’s ok, I raced Mooloolaba a couple of weeks ago so it’s my second race. It’s always good to get one race out of the way before the season starts and I’m ready to race and will see what happens.”

You are the number one ranked NZ athlete now – does it feel any different?
“A little bit older, the old boys have gone away and done some different stuff I always knew that was going to happen and I suppose it seems to be this year and it’s great it’s at home and I know the course really well I live in Auckland. I like training and racing here. Last year was a great event and hopefully this year will be a lot better. Just looking forward to it.”

Is it your goal to place consistently in top ten?
“Absolutely. I always wanted to be in the top ten in the world and I always want to win as well but you have to be a bit realistic with your goals and I suppose with a few more years I could possibly be there, but this year I’m just looking to be a lot more consistent over the series and see where that takes me.”

Gwen Jorgensen (USA)
Your run split last year was over a minute faster than anyone else (34:10). Do have you those good memories with you in Auckland?
“You know everyone took a break after last year then I put in some more training and decided to come here and test my fitness on this tough course again.”