What a day it was for Aussies named Emma in Budapest. Emma Snowsill, the 2008 Olympic Champion, dusted the field on the run, winning the Dextro Energy Triathlon ITU World Championship Grand Final by one minute and 44 seconds. Next to cross the line was teammate Emma Moffatt, who secured back-to-back ITU World Championships by finishing on top of the Series points standings.

“I think the second title definitely means more than the first,” Moffatt said. “I don’t know that it has really sunk in yet though. I’m really happy about my finish and also really happy to see another Aussie get the win today. It was a great day for Australia.”

Moffatt entered today’s race as the top-ranked athlete in the world, knowing that all she needed to do to take her second world title was finish on the podium.

Snowsill was in a class of her own today. I wanted to go with her, but she’s just too fast.
Nicola Spirig

Seventy women dove into Lágymányosi Bay along the banks of the River Danube to start the day, and as has happened time and time again this year, the American women stroked to the front right from the start. Sarah Haskins led the field after the first of two 750-metre run laps, with teammate Laura Bennett and Brit Helen Jenkins only seconds behind. Haskins led through lap two, exiting the water in 18:03, with a small group of seven women only a few metres back.

Haskins and Jenkins led the charge onto the bike, as a front pack of 16 women came together and tried to force an early break. The leaders were unable to stay away from the chase pack, led by Lisa Norden (SWE) and Nicola Spirig (SUI), and were caught early on the first of seven 5K laps around Downtown Budapest. Snowsill found herself in the lead bunch on the bike for the first time this season, after exiting the water in the top 20 overall.

“I’ve really been working on my swim. That’s my background and it’s been my strength in the past,” Snowsill said. “It’s all about getting that fine balance right in triathlon and today it all worked.”

Noticeably absent from the front group was Kiwi Andrea Hewitt, who entered the race ranked second in the world. Hewitt was joined in the chase pack by teammate Nicky Samuels, and the pair of Kiwis worked together to bridge the gap. At the halfway point of the ride, Hewitt found herself still 45 seconds behind the big lead group.

Hewitt’s pack was unable to catch the leaders, as the front group of 40 entered T2 in a tight bunch, before Moffatt and Snowsill surged to the front to take an early lead on the 10K run. Only two kilometres into the run, Snowsill was alone at the front, holding a lead of over 15 seconds over her countrywoman.

Moffatt ran comfortably in second place, keeping tabs on Norden, Spirig, Jenkins and the rest of the women close to her in the world rankings. Only four kilometres into the race, it was clear that the race for first was over, as Snowsill’s lead had ballooned to over 40 seconds and was continuing to grow. Further down the road, Spirig, Norden and Jenkins tried to pull away from Moffatt, but the Aussie was too strong today.

After a year of ups and downs, Snowsill broke the finish tape in 1:49:43, posting an incredible 10K run split of 33:08. She put a stamp on her claim as the best big race athlete in the world, having won at the Olympics and twice at the Hy-Vee Elite Cup, the world’s richest triathlon.

“Missing five months of training during the beginning of the season makes the season tough,” Snowsill said. “I always knew my speed was there I just needed to take the time to tap back into it and get everything back in order. Now I know what I need to do to be consistent throughout next year.”

The race for second came down to a thrilling sprint finish between Moffatt, Spirig, Norden and Canadian Paula Findlay, with Moffatt pulling away in the final metres to claim the runner-up position and secure her World Championship.

“When [Snowsill] took off I really wanted to go with her, but there was no way,” Moffatt said. “She was going way too fast for me. I was happy to stay with that other group of girls today and was really pleased with the way I finished.”

Spirig finished just one second back of Moffatt, moving her up to third in the final Series rankings.

“It’s so exciting to be on the podium at the biggest race of the year,” Spirig said. “It’s been an amazing year and this was the perfect way to end it. Snowsill was in a class of her own today. I wanted to go with her, but she’s just too fast.”

Norden was the next across the line, only one second behind Spirig, keeping her in third-place for the final 2010 rankings. Findlay finished next, another two seconds back, moving her up fifth in the final rankings, one spot behind Jenkins. 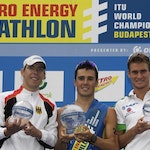 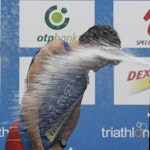 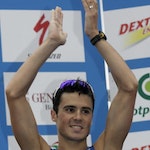 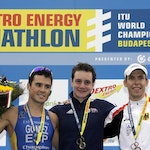 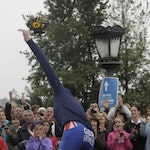 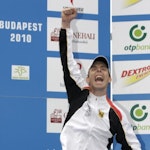 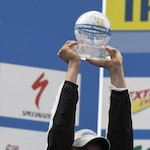 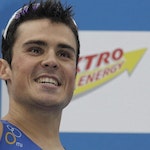 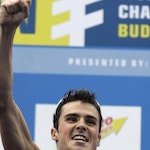 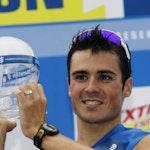 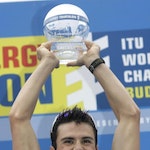 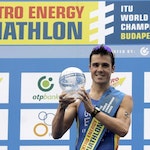