by Andrew Dewhurst on 10 May, 2014 06:59 • Español
It was an Aussie win at the Chengdu ITU World Cup in China today, with Gillian Backhouse (AUS) proving too strong on the run to clear out in warm and muggy conditions.

It was an Aussie win at the Chengdu ITU World Cup in China today, with Gillian Backhouse (AUS) proving too strong on the run to clear out in warm and muggy conditions to win by 29 seconds from Jessica Broderick (USA) with Claire Michel (BEL) in third place.

Unlike the men’s race, a smaller group of 15 riders established themselves out of the swim and gradually broke clear of the bulk of the field, leading by almost 2 minutes into T2. That group quickly broke up on the run though, with Backhouse quick to hit the lead and scatter the chasers.

It was a first win for Backhouse and one that she was delighted with.

“In terms of career performances this is the absolute best for me by a mile. My previous best at an ITU World Cup was 15th. It is not a complete surprise though, training has been going really well over the past month, my coach and I were hoping for a top five but to win is just absolutely amazing.

“The conditions were pretty much perfect for us today. The smog has cleared up a bit today, when we first got here I was a bit worried but it is much much clearer today and great for competing.”

Backhouse is back to training for now but already thinking of opportunities later in the year.

“I am back to a block of training and then a crack at the U23 Duathlon Championships and hopefully a couple of WTS starts in the not too distant future.”

Broderick did feel the conditions more so than Backhouse but stayed patient to hold on to second from a fast charging Michel.

“It was pretty hot, I haven’t been to China before but I have been to Taiwan and remember the hot conditions from there. I wasn’t expecting it to be this hot before the race but I just made sure to hydrate on the bike and stick to my race plan and it seemed to work.

“Gillian went out kind of hard, and I know in myself that I need to ease into the run. I haven’t raced for 11 months so I had to be a bit cautious. I had an injury last year and with the floods and all in Boulder it was too chaotic to race at the end of last year. I just started to work with Darren Smith this year and had a consistent training block for the past four months and I guess things are working. This is my all-time high for sure.”

As was the case with all six of the podium place getters in Chengdu, it was a career best performance and first World Cup podium for Claire Michel in third place.

“I didn’t have a very good swim, I had to work hard on the bike in the chase group, I did a lot up front to try and minimize the gap and then had to work pretty hard on the run to try to come back and reel them in but this is my first podium for a World Cup so I can’t complain. I am satisfied with that but I think I am capable of better but that is the good thing about each race, as long as you learn from each race that is good.

Michel’s run was impressive as she and Lisa Perterer (AUT) ran through from the chase group off the bike, with the Austrian finishing 4th to just miss her goal of a first ITU World Cup podium.

It was the Chinese athletes who had the crowd cheering early, dominating the swim and providing 4 of the 15 riders in the lead group, but once on to the run the local influence waned and the class of the more experienced international athletes shone through.

The event will go down as a rousing success though regardless of local athletes not challenging for the medals, with a massive crowd in attendance at the purpose built triathlon venue. Estimates had over 100,000 surrounding the park in Jintang, Chengdu, some getting their first experience of international triathlon and every one of them loving it. 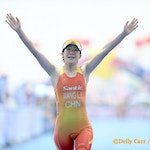 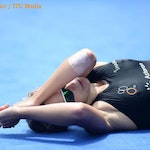 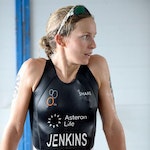 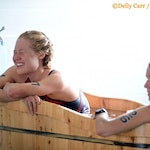 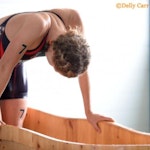 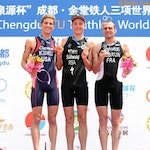 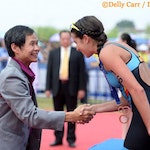 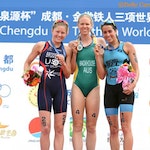 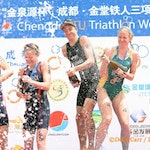 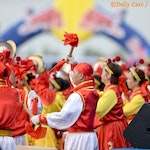 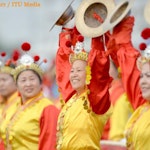 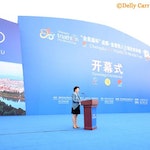