With a magnificent coastline, popular tourist destination Ibiza island in the Mediterranean Sea was the stage for the 2010 Ibiza ITU Long Distance Triathlon World Series Event, which took place on 31st October 2010.  A 4k swim course was set in the beautiful beach of Figueretas, a 120k bike course passed by Cala d’Hort, and a final 30k run was laid in the heart of the city, a large portion of which is a UNESCO World Heritage site.

The Spanish island paradise, however, turned out to be one of the toughest stages for a triathlon due to a stormy weather.  65 men and 10 women set off in the nasty ocean at 7:30 in the morning.

In men’s contest, Stephen Bayliss of Great Britain finished at the top of the podium.  Bayliss managed the swim portion in a leader’s group of four, including Peru Alfaro San Ildefonso (ESP), Bart Colpaert (BEL) and Rasmus Stubager (DEN), and soon broke away from the chase pack.  Though he lost almost a minute during his second lap of the bike due to a flat tire, the Brit built an advantage little and little in the hard rain, and finished the bike two minutes ahead of the second group.  In the final 30k run, Bayliss was strong enough to edge out the contenders with Alfaro San Ildefonso finishing in 2nd by 2 minutes and 37 seconds.  David Castro (ESP) came in third.

In women’s race, Bella Bayliss of Great Britain dominated the field and won by 37 minutes, achieving the back-to-back wins for the British couple.  Kristin Lie (NOR) finished in 2nd, while Saleta Castro (ESP) in 3rd. 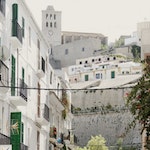 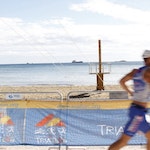 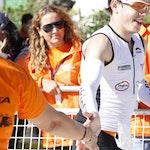 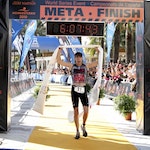 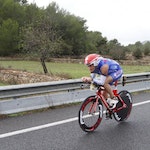 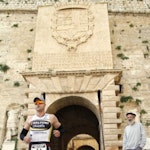 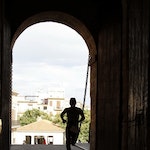 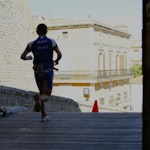 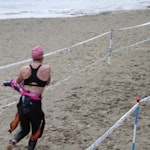 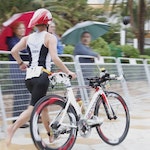 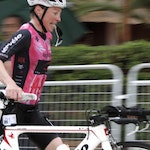