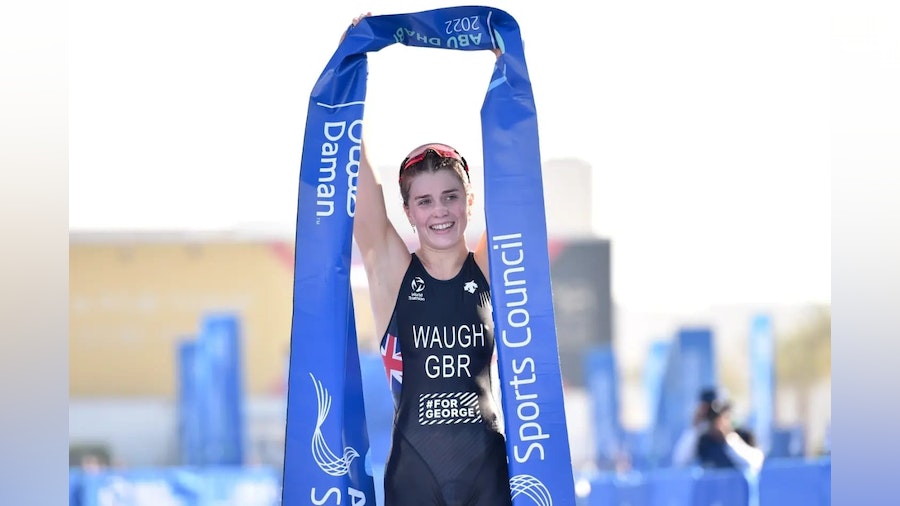 The 2022 World Triathlon Championship Finals Abu Dhabi continued on Friday morning with the women’s U23 World Championships, and it was to be the golden day Britain’s Kate Waugh had been dreaming of after making a decisive bike break with teammate Jessica Fullagar and then pulling clear on the run, embarking on a gutsy solo 10km all the way to the tape.

The two left the rest of a six-strong lead pack for dust on the sixth of eight bike laps, but it was Germany’s Annika Koch who kept her head out of transition and worked her way into the silver position, Italy’s Bianca Seregni patiently going through the gears to take the bronze at the end of a gruelling two hours of racing.

“I crossed the line in tenth last year, and I really wanted to win this one,” said a delighted Waugh. “I’ve had some complications and some niggles to deal with so it’s all a bit emotional. Jess and I train together in Leeds, do our bike sessions together and I knew my run was a bit below par this year so wanted as big a gap as possible and it paid off. I was hurting so much on the last lap and knew the gap was closing so I just had to stay focussed.”

—
It was beautifully clear and calm on Yas Bay as the 39 women lined up for the first race of the day, and conditions were perfect for Bianca Seregni to settle into her trademark swim rhythm and begin opening up a big advantage over the rest of the field.

China’s Yifan Yang had just the one World Cup start to her career in Miyazaki but was showing her strength in the water at the halfway point as she emerged 22 seconds off the Italian, Hungary’s Marta Kropko and Kate Waugh out next together, Annika Koch also going well after 750m.

By the end of the second lap the gap to Kropko and Waugh was 36 seconds, Jessica Fullagar and Liberty Ricca (USA) right there too, but the American and Yang were unable to profit from their strong starts and fell back as a five strong chase pack set about reeling in the Italian.

Waugh and Fullagar worked well over the first lap to do just that, Kropko, Koch and Selina Klamt (GER) along with them and there were now six riding together early in the second lap of eight.

Behind them, Barbara de Koning (NED), Bailee Brown (HKG) and Constanza Arpinelli (ITA) were 50 seconds back, Australia’s Matilda Offord and Maria Tomé (POR) among the athletes 90 seconds back.

As Waugh flew through the technical sections, the pack would come back together on the straights, Seregni happy to drop into the group and share the workload so that by the end of lap two the gap was 45 seconds to the likes of Faith Dasso (USA) and Kamille Larocque (CAN).

On lap six it was the British duo who made a move that stuck, Waugh onto the gas and pulling clear together and decisively before handing the reins to Fullagar into the technical section and suddenly the pair had 20 seconds over the four now left behind.

By the bell that gap was up to 44 seconds, before the end of the bike it was over a minute, and nearly two minutes to the nine athletes further back.

That huge gap afforded the two leaders a moment to recalibrate, take on water and begin to prepare for the run, the gap was 66 seconds to Koch and Seregni.

Waugh went on the attack and dropped Fullagar early on lap one of four, Koch then slowly getting the Brit in her sights by the end of the first 2.5km loop, Seregni tucked in behind her.

It was Waugh by 35 seconds to Fullagar, then 23 seconds to Koch, Klamt with 13 seconds over Seregni after lap one, the medals already looking to be shared between a combination of those five.

As Fullagar’s legs and medal hopes faded, Waugh continued to forge on. Behind her, it wasn’t long before Koch assumed the second spot, Seregni’s excellent second lap seeing her pull up on and pass Klamt, but there was to be no change up front for the remainder of the 10km, emotion pouring out of Waugh as she crossed the line to become the 2022 U23 World Champion.

“I’m really happy with my run, and a shout out to the Brits for their job on the bike,” said Koch. “We did everything to keep the gap as small as possible but they did an amazing job and a really deserved winner.”

“I’m so happy with this result, the race went well and even though we came for the win I’m happy with the podium,” said Seregni. “I was alone on the swim so the bike was pretty hard and we didn’t collaborate that well. On the run I tried to keep aware of the heat and take my time and managed to catch the podium.”