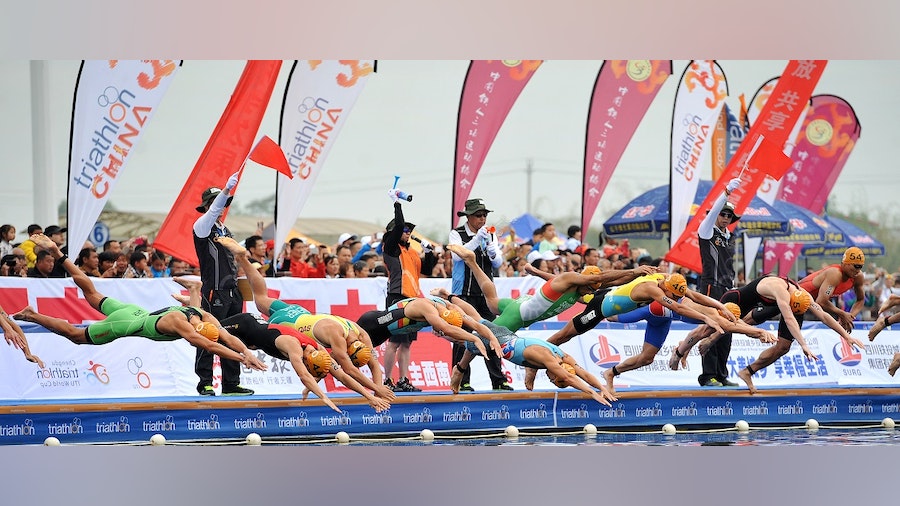 In the fourth stop of the World Cup series, China will host the first semi-final; final format of the year at the 2017 Chengdu ITU Triathlon World Cup.

The multi-race format will consist of two different events with two different distances held over the course of two days. In a semi-final elimination round, athletes will complete a sprint-distance course, which consists of a 750-metre swim, 20-kilometre bike and 5-kilometre run. The men’s field will have a total of three semi-final rounds where the top nine men from each round will qualify for the finals, followed by the next top three fastest combined times to create a total of 30 men for the “A” Final start list. For the women, two heats will occur with the top 14 finishers from both rounds combined with the next two fastest times will create the 30-woman “A” Final roster. In both genders the athletes with the time of 31st to 60th position in the semi-finals will qualify for the “B” Finals. The Finals will then consist of a super sprint-distance format, which will see the athletes completing a 400-metre swim, 10-kilometre bike and 2.5-kilometre run to crown the final winners.

Women’s Preview
In the first heat of the women’s event, 23 athletes will toe the line to kickstart the sprint distance elimination rounds. USA’s Kirsten Kasper tops the first start list having been one of the few women to have reached the top of the ITU World Cup podium. She will race as the lone American, stepping up against a strong British showing for the first heat.

Lucy Hall and Jessica Learmonth are teaming up in the semi-final round. Hall won the first World Cup race of the season in Cape Town, with Learmonth, her training partner, taking second place. The two are very strong cyclists and work well together, so are huge threats if they end up side-by-side on the bike.

Aussie Emma Jeffcoat nears the top of the start list, she is an up-and-coming female lead for Australia, who has been rising in the rankings and in finishes.

In the second semi-final round, Brits Vicky Holland and Non Stanford are making their ITU competition debuts. Holland, the 2016 Rio de Janeiro Olympic Bronze Medallist tops the start list and will be racing in her first World Cup since 2014. And while she is a regular on the World Triathlon Series podium, she has never graced the World Cup one, so starting off her 2017 season with some hardware would be a good way to begin. She will be squaring off Stanford, her former training partner and housemate. Stanford also has not raced in the World Cup circuit since 2011, so it will be a good welcome back to the series for her. She excels in a sprint-distance format, so it will be exciting to watch her start off her year this weekend.

Other strong women in the second heat are Japan’s Yuka Sato and Australia’s Erin Densham. Both Rio Olympians, Sato has World Cup winning potential as she has taken gold back in 2015. Densham is a veteran on the race course and is also making her 2017 event debut this weekend, in fact it will be her first race since she competed in Rio.

Men’s Preview
The men’s field will consist of three rounds of competitions all containing top men eager to get the finals. The first heat will be led by Russia’s Dmitry Polyanskiy. Polyanskiy enters as the reigning champion from the 2016 Tiszaujvaros ITU Triathlon World Cup, an event that hosted the same two-race format last year, so he has the experience of getting past the first round and taking all. He may be the biggest threat of the weekend.

Close behind him is Gabor Faldum of Hungary and Joao Silva of Portugal. Faldum won his semi-final round last year in Tizsy, but came short in the final round, but he is a strong all-round athlete and will be fighting to get in the second race. While Silva has the experience of multiple ITU podiums throughout his career.

The second semi-final event will see Olympian Rostislav Pevtsov (AZE) topping the list. He earned the silver medal in Chengdu in 2015 and comes in as the frontrunner for the venue.

Aussie Luke Willian made his World Cup podium debut by earning the gold medal in Mooloolaba this year and proved he is one to watch as an up-and-comer.

Canada’s Tyler Mislawchuk has not raced since he made his Olympic debut in Rio last August, but he also is a younger elite who continues to rise the rankings in the ITU elite world and has a good chance to make the finals this weekend.

The final and third heat in the men’s semi-finals will be led by the younger of the Polyanskiy brothers, Igor Polyanskiy. Hoping to get the chance to race against his brother, Igor will be looking for revenge after he earned the silver medal to Dmitry’s gold in the two-race format in Tizsy last year. Igor excels in the swim, bike and run so will take a lot for him not to get in the finals.

Going up again the Russian will be Denmark’s Andreas Schilling and Slovakia’s Richard Varga, two men that are powerful in different disciplines. Schilling is quick on the bike, while Varga is a beast in the water. Both men should have not problem leading in the perspective legs, but the shorter distances might not play in their favors to give them the advantages that they might need.

The men will get the 2017 Chengdu ITU Triathlon World Cup underway with the first semi-final round taking place at 09:00 on Saturday, May 06, while the women will follow at 11:30 local time. The “A” Finals round will take place on Sunday, May 07 with the men starting at 10:05, with the women following directly after at 10:50am. Follow all of the action with live timing at triathlon.org/live and on twitter @triathlonlive using hashtag #ChengduWC.