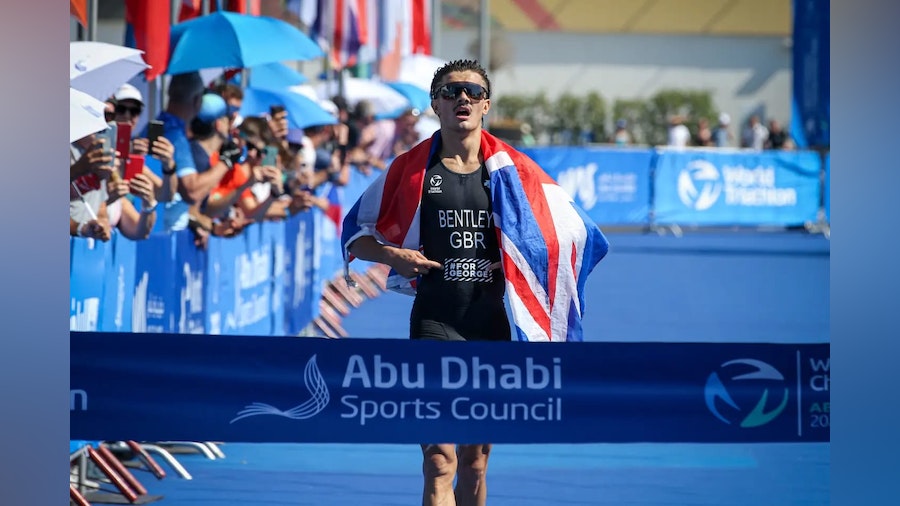 Britain’s Connor Bentley capped a remarkable end to his year with an outstanding U23 World title in the heat of Abu Dhabi on Friday morning. Having led with a small group for much of the bike, a huge pack merged over the final laps, and once a ragged collective opening loop had been negotiated, it was Bentley who somehow found another level to pull clear for the last time and soar to the gold.

Having kept right on his shoulder for the whole race, teammate Hamish Reilly couldn’t quite hang on down the final straight, Hungary’s Gergely Kiss with the late surge to take silver.

“When I look back at what i’ve gone through this year, I was grateful just to be here,” said an exhausted Bentley. “To be the first person across the line… I don’t have words for it, thanks to everyone in Loughborough who got me through. We got off to a good start and held it for the first lap. I pushed hard on the bike with Jamie for two laps but it didn’t stick, so the next laps I paid for it, but me and Hamish took it out on the run and my legs were there - I had it in the hurt locker today.”

—
The heat continued to build for the 62 men lining up on the edge of Yas Bay, and unlike the women’s race earlier in the morning, the swim stayed together up front so by the halfway point there was only ten seconds separating the first 20 athletes. Hungary’s Gergely Kiss was out at the turn just ahead of Jamie Riddle (RSA), Alessio Crociani (ITA) and Max Stapley, racing under the TRI flag as he continues the process of switching from representing Australia to GB.

Crociani had moved his way to the front by the time the pack emerged up the ramp at the end of the 1.5km swim, Riddle still right there, Nicolo Strada now just off his teammate, Valentin Morlec (FRA) also well placed.

It was in fact Connor Bentley (GBR) who was fastest in transition and out on his bike first, and he and Riddle were straight on the gas and quickly putting some useful daylight between themselves and the growing pack behind.

By the end of lap two the break was over, the leaders hoovered up into a now 22-deep lead group, Riddle still taking to the front at every opportunity and relishing the challenge of the course.

At the halfway point of the bike it was Gergo Dobi of Hungary out front of the 22 while Britain’s Daniel Dixon was hollering down his fellow chasers to organise them and slowly they closed down the margin until the groups finally merged into a 38-strong pack with two laps to go.

That was how things stayed for the remainder of the bike, the congestion heading through the final turn causing issues further back but no such problems for Bentley, Riddle, Strada, Paul Georgenthum and Kyotaro Yoshikawa as they poured out of transition and onto the run.

Stapley moved his way to the front of six with a slender lead at the end of the first lap, the scramble for water slowing things down so that eleven came past the grandstand together, Dylan McCullough just off them, Riddle now 18 seconds from the front.

Hamish Reilly joined compatriot Bentley with Stapley and McCullough, Georgenthum just off the back USA’s John Reed looking strong, but it was the two Brits looking to carve out a small advantage towards the end of the second lap.

As they opened up their lead Eric Diener and Kiss were able to stay in touch, but it was Bentley who then found an entirely new level to his run, kicking smoothly away down the final kilometre to soak up the moment as he crossed the finish.

Behind him, it was Kiss who could dig in and take silver ahead of Reilly, Diener crossing for fourth, Swiss Maxim Fluri in fifth, Stapley, Georgenthum, Morgan, Reed and Itamar Eshed rounding out the top ten.