Former junior track and field star, Emma Pallant (GBR) scored a strong win for Great Britain, putting pay to the hopes of world champion Sandra Levenez (FRA) going back to back in Adelaide.

Midway through the 40km cycle leg Levenez, Ueda and Pallant thought they had the podium sorted but Gillian Backhouse (AUS) had other plans, charging through the final laps of the bike to make the cosy trio, a very nervous quartet.

“During the bike the three of us were working as a team to stay away but when Gillian came up to us it suddenly became a lot more tactical and we kept trying to break each other,” Pallant said. “I knew the quality of girls around me and I knew it was going to be a fight to finish, but I felt good going onto the final run.”

Pallant’s task was made a little easier when Ueda was forced to serve a time penalty before heading onto the final five kilometre run.

“I didn’t realise Ueda had been penalised until she stopped, suddenly I thought where has she gone. I just tried to stay in my rhythm and tried to stay nice and relaxed.”

“I felt comfortable throughout the final 5km and I have been working a lot on my sprint finish, so I was comfortable about how I would react if someone ran up to me. But with one km to go my coach told me I had a 15 second gap so I knew that no-one was going to come past me.”

Pallant, a bronze as a junior at the World Track and Field Championships over 1500m and a former European Cross Country champion has been working with Dillon since 2012 to make the jump across to multisport.

“In that time I have learned so much. It is a really hard transition to go from being a runner to learning to run off the bike. It is a whole new skill.”

“I have always been a runner, so this win feels even more special because it has been a different challenge. The race culminates three years of hard work with Team Dillon who have been really patient and had amazing belief in me,” said the delighted new world champion.

Women’s under 23
Young Sunshine Coast Aussie, Annelise Jefferies, is her nation’s newest world champion holding off a determined challenge from Giorgia Priarone (ITA) to secure the under 23 world duathlon title.

An excited Jefferies was quick to thank her Aussie team mate Sarah Crowley for the unplanned ‘on course’ mentoring session she believes helped her win gold.

“In the first 10km I went out a bit fast and got a little bit excited and with each lap I was dropping back. Then Sarah Crowley came along and helped me through the rest of the first run telling me to relax.”

“On the bike we were gaining on Giorgia and then we formed a small pack. With small attacks and started to try and burn their legs but we couldn’t get away from them.”

“I had a fantastic T2 and Sarah caught up to me and mentored me through the final 5km. It was a great team effort, totally unplanned but amazing. It was great to see that sort of team spirit.”

“I had planned to race under 23 at the World Triathlon Championships but I got injured for a few months (femoral splints) and that set that goal back. So I had to re-evaluate and set myself a new goal, I am pretty happy with how it all turned out and totally stoked about winning the world title,” she said.

“I love racing in the heat so the conditions were ideal, nice and sunny. The course was great for both running and cycling. I am only sixteen so It is great to have a world title at such a young age. It feels really good,” Strauss said.

With Strauss in control on the final 2.5km run leg, it was left to Katherine Badham (NZL) and Sayu Arizono (JPN) to battled it out for the remaining medals, with Savannah Wayner (AUS) finishing fourth.

All files by Noel McMahon 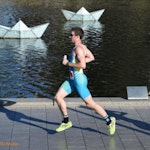 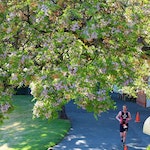 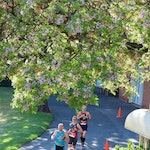 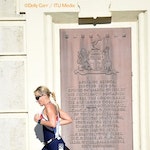 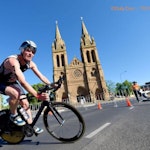 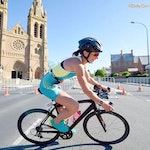 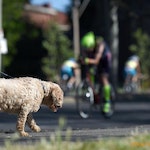 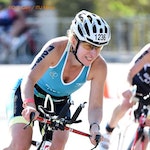 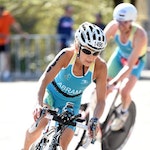