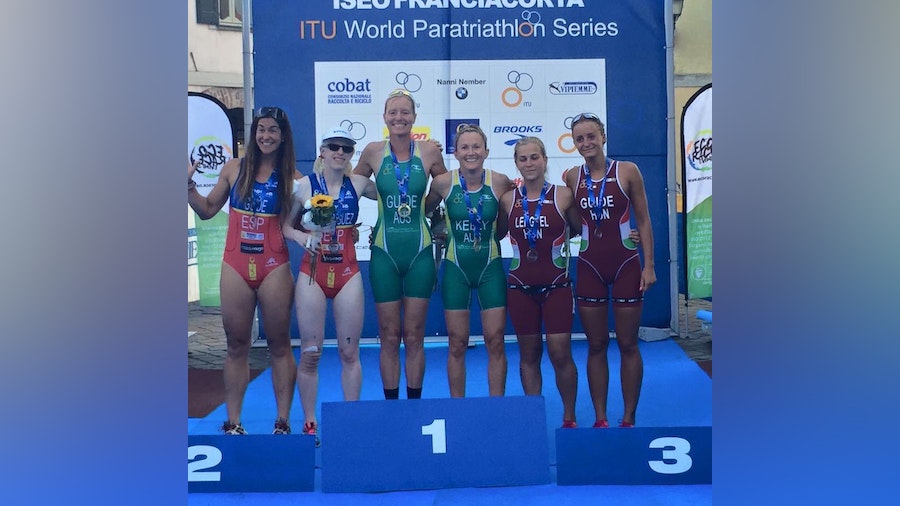 Great Britain’s Steadman continued her winning return to competition in the women’s PTS5 class after a seven-month break from the sport following last year’s Paralympic Games. The Rio 2016 silver medallist followed up her fifth European title with her first World Cup victory of the season. The 24-year-old (1:13:21) finished ahead of France’s Gwladys Lemoussu (1:18:47), with Ukraine’s Alisa Kolpakchy (1:22:37) in third.

Another European champion who was victorious in Iseo was Finland’s Liisa Lilja, who produced a dominant performance to win the women’s PTS2 event. It was a comfortable win for Lilja (1:27:53) from Russia’s Veronika Gabitova (1:43:52), with Italy’s Veronica Yoko Plebani (1:53:47) completing the podium.

The women’s PTS3 race saw two European medallists go head-to-head in what proved to be a close contest between European champion Anna Plotnikova and European bronze medallist Elise Marc. Marc had an advantage of over four minutes after the swim, but Plotnikova cut the French Paratriathlete’s lead to two minutes, 10 seconds after the bike. Plotnikova then produced a strong run to catch and overtake Marc to finish in a time of 1:28:42, 54 seconds quicker than Marc (1:29:36).

France’s Alexis Hanquinquant continued his impressive start to his Paratriathlon career in the men’s PTS4 event. Hanquinquant only started competing in the sport last year and victory in Iseo saw him pick up his fouth win of the season. The European champion (1:06:37) beat the Russian pair of Mikhail Kolmakov (1:09:49) and Denis Kungurtcev (1:10:53).

Bahier pulled out an advantage on the swim, before extending his lead on the bike and run to win in a time of 1:12:47. Russia’s Vasily Egorov (1:19:09) finished second, while Italy’s Michele Ferrarin (1:20:23) rounded off the podium.

Ruiz Lopez continued his good form after an injury-hit start to season by winning back-to-back World Cup events. The Spaniard was second after transition two, before producing a strong run to repeat his victory from Altafulla in a time of 1:04:33. George Peasgood (1:05:20) finished second, ahead of France’s Yannick Bourseaux (1:06:14).

Great Britain’s Karen Darke, who won a gold medal in the cycling time-trial H1-3 at last year’s Paralympic Games, finished nearly 13 minutes ahead of France’s Mona Francis (1:40:12) to win the women’s PTWC race in a time of 1:27:37.

There was Italian success in the men’s PTWC and women’s PTVI events with Giovanni Achenza and Anna Barbaro making their home advantage count.