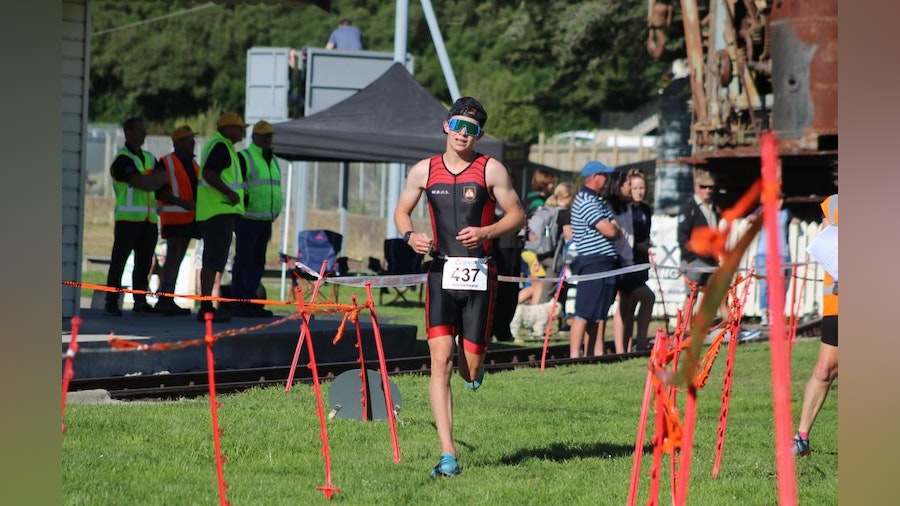 Jakob Cunningham of New Zealand is set to line up for his first World Triathlon Age-Group Championships in Abu Dhabi at seventeen years of age in the 15-19 Male Age-Group Super Sprint race on the 24th November.

When did you start Triathlon?
I did my first Triathlon in 2016 at the Junior Challenge Wanaka at 10 years old. I kept racing the junior event every year until 2018 when I started High School and then began to do Triathlon as my main sport and raced in the secondary schools event there.

How did you get involved?
My mum and her partner were both racing in the Challenge Wanaka half races as part of teams and I had always been a cross-country runner and thought I would give it a try and have never looked back.

Do you train solo or with a group?
I mostly train alone but swim in a swimming squad with 10-15 other swimmers. I’m a member of a small cycling club that meets once a week over the summer for 15km scratch road race.  One of my other passions is mountain biking and I ride with other local athletes.

Do you have any idols in Triathlon?
One of my idols in Triathlon is Braden Currie. Ever since I began Triathlon I was able to watch him race the Challenge Wanaka in person and was able to meet him after one of my races. Ever since then I’ve looked up to him and ultimately continued to pursue Triathlon because of him. My first coach/mentor was Dougal Allan who is a multiple-time Coast to Coast champion, I always knew of him and as I got older and began to work with him I idolised his work ethic and the athlete he is. He is one of the most humble and kind individuals I know and was the person who built my Triathlon ability to the level it is. The obvious person I think most kiwi triathletes idolise is Hayden Wilde. The way he races at the top level from a little country of New Zealand is truly amazing. I feel like I relate to him as he doesn’t normally come out of the swim in front so he has to work his way up using his biking and running strength, for myself I don’t come out the swim in front either and have to make up time in the rest of the race.

How excited are you to line up at the Age-Group World Triathlon Championships in Abu Dhabi?
It’s pretty insane to be honest. I’m excited to test myself against people from other countries. I know where I sit compared to kiwi athletes so it will be interesting to see where New Zealand sits compared to the rest of the world. I’m also excited to be able to get the experience under my belt and hope to continue to improve and hopefully race more world championships and Junior U19 events.

Are you excited to meet other members of Team New Zealand who are racing?
It is always cool to meet new people and hear about their lives and how they got to where they are so I’m excited to be able to meet so many new people. Luckily enough the one person I do know is the other u19 boy Grayson Westgate who lives 90 minutes down the road from where I live and have had plenty to do with him in the past.

What is your goal for Abu Dhabi?
For us, it is our off-season and only just coming into the start of the season so I haven’t been able to race yet. It will be good to see how the fitness levels are going and continue to build into Nationals next year. I would be extremely stoked with a top 10 placing but it is hard to know what to expect when you don’t know anyone who is in your race.

Is this your biggest race yet?
This is definitely my biggest race yet. First time racing overseas my and first time being overseas since covid has stopped most travel over the past years. From Nationals I didn’t get the result I wanted due to sickness which eventually led to it being covid. We emailed Tri NZ asking what the selection process was for an upcoming event and after a while Mel our team manager emailed to say that I had been selected for this event which was a major shock. From there we have done major fundraising efforts to get here. Started with a quiz night and then made 800 dozen cheese rolls. The fundraising and help from local businesses and groups was what enabled me to confirm my place for coming over.

Would you love to see more of your school friends giving Triathlon a go?
A lot of my friends like to joke about my racing so I think I’d just like to get all of my mates to come and do a race to see how they all go. Hopefully, it might help them to take it seriously. I wouldn’t want to see any of them swap what they do for it cause I enjoy seeing them do well in all of their own sporting areas. I’m extremely proud of what they do and all of their achievements.

Contact your National Federation is you want to find out more about how you can represent your country at a World Triathlon Age-Group Championships.