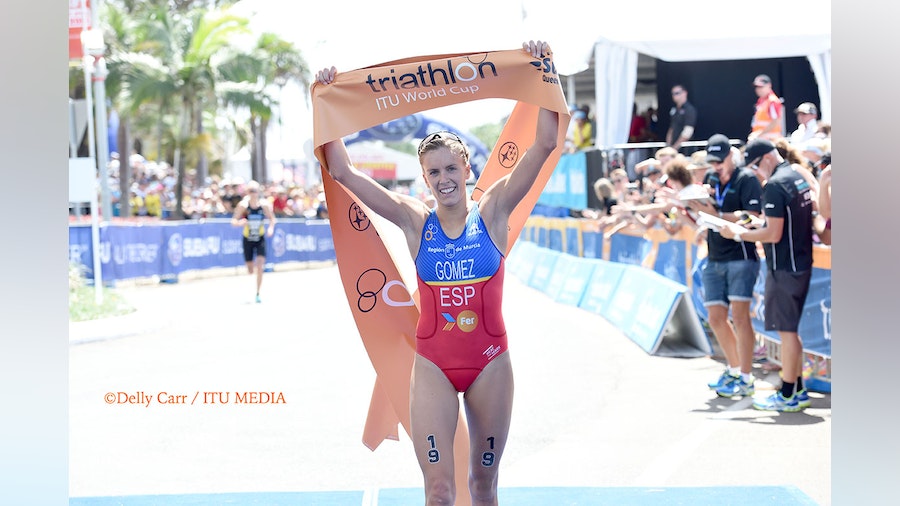 A week of rest was all Spain’s Tamara Gomez Garrido needed, when she claimed her first World Cup title on Saturday in the opening women’s ITU World Cup sprint race of the season in Mooloolaba, just a week after competing in the season opening WTS race in Abu Dhabi.

Showing up with a steady performance throughout the race, the Spaniard earned the gold in the final lap of the 5km sprint run, breaking away from Canada’s Amelie Kretz (CAN) who crossed the line a mere four seconds behind to walk away with the silver.

It was a breakthrough result for Gomez Garrido, whose past few years had been affected with injury, but has been training with Javier Gomez Noya’s team since January.

With the skies clear and the sun shining, the Queensland Sunshine Coast brought out an abundance of competitors all eager to start out the World Cup season.

Swim started out with a short and fast 750-metre turnover, with the first athletes leaving the surf at around the 10-minute mark. A small group was able to capitalise on the 200-metre run into the first transition to get a headstart on the bike leg.

Excitement heightened during the bike portion of the race. A lead group of about 16 formed early and remained together for the majority of the 20km leg, including Ashleigh Gentle (AUS), Renee Tomlin (USA), Lisa Perterer (AUT), Sarah-Anne Brault (CAN), Paula Findlay (CAN) and Kretz. They held 30 second lead through the halfway mark of the bike, looking to enter the second transition with a healthy advance. But the chase group executed an excellent third lap, as they were able to close the gap to only about 12 seconds going into the bell lap.

Upon going into the run, it looked as though a Canadian sweep might occur as Kretz, Brault and Findlay were all among the lead group. Once foot hit the pavement however, Gomez Garrido and Kretz snuck out to the front where they maintained their fight until the finish.

Kretz opened up the World Cup season with a strong performance throughout the entirety of the competition, remaining in the top-5 positions for all three areas. While Gomez Garrido maintained a stable swim and ride, it was her efforts on the run that landed her the ultimate top finish. Kretz was still happy with her performance, her second podium place in two weeks after a win at an Oceania Cup event last weekend.

“It was amazing, the condition in the water was pretty intense,” Kretz said. “My start wasn’t very good but on the last bit I tried to catch up and I had a good exit and a good run, so I was well positioned in T1. On the bike we kept working together. On the run I gave everything, at the end Gomez got me in the last few hundred metres. But it’s a beautiful place and really well organised so I’m very happy.”

In a pack of about four, Gentle, Jessica Broderick (USA), Perterer and Emmie Charayron (FRA) formed all vying for the bronze position. Gentle proved the best of the rest, pulling out a strong final lap to take the last spot on the podium.

“It was a really tough race,” Gentle said. “I was really happy with my swim, I got an inside line…coming towards the beach everyone sorted to come around, but I caught a wave right to the end and it got me in a great position. Then I guess the bike the pace was up and down, real tailwind and headwind. The run was super fast on the start. I was just really focused on myself and wanting to build into it.” 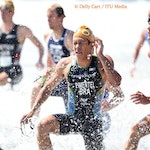 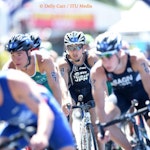 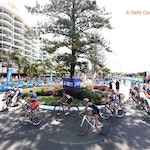 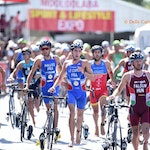 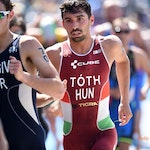 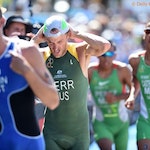 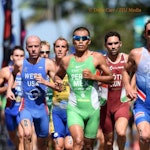 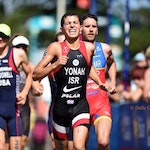 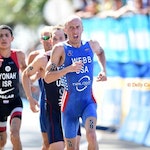 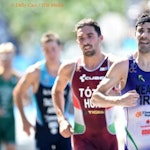 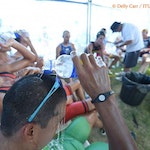 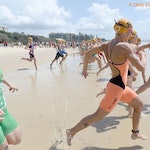