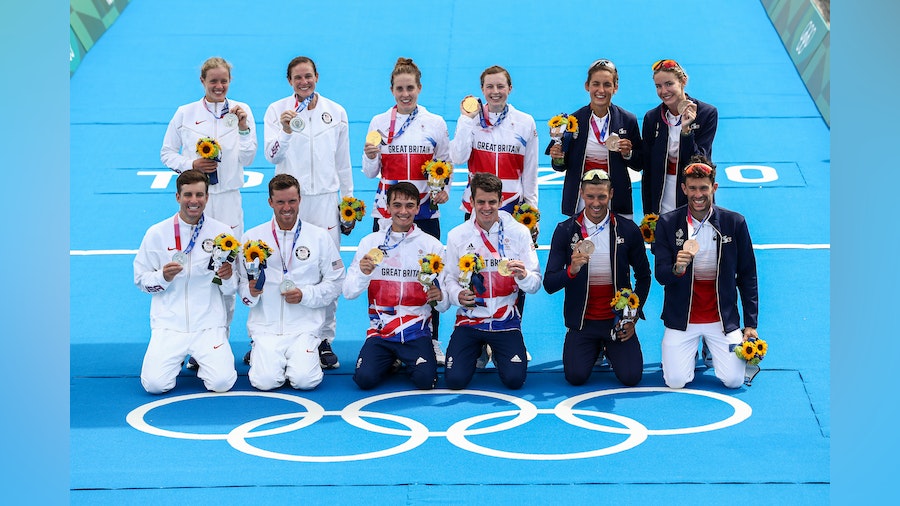 The build up had been intense, the anticipation huge and the action did not disappoint as Great Britain’s Alex Yee hung on to the tightest of leads for the final 2km run and bring home the first ever Mixed Team Relay Olympic golds on a beautiful Saturday morning in Tokyo. Jessica Learmonth had set the tone with a brilliant opening leg, Jonathan Brownlee delivered a show for the ages to ensure he leaves his Olympic Games career with a medal of each colour and then it was the two silver medalists, Georgia Taylor-Brown and Yee who saw it through.

It was a grandstand finish after a strong run from Cassandre Beaugrand and then Vincent Luis had brought France right back into the hunt, but the effort to catch Yee on the bike left him drained for the run, Morgan Pearson eventually passing to earn USA the silver.

—
“To be able to do that and win Olympic gold with this team after everything that has happened is so special. “It’s a whirlwind. It was hard work but so worth it,” said Learmonth afterwards. “Yes, that was special. Slightly different to one million people in Hyde Park, but this was special in its own way,” added Brownlee.

“These guys had done great legs and put me in such a position that I just had to do everything to stay there,” added Yee. “It’s surreal. That was 2km of pain, the longest of my life. I wanted to go hard at the start because I had a little gap and it worked.”

“It’s a bit scary leading, it’s easier to have people to chase,” said Taylor-Brown. “When you’re out front, you don’t really know what’s going on behind. The relay is so fast anyway, there’s not much time to take in any information on the course. I just had to time trial it. I just had to put my head down, we all knew what we needed to do today and we did it.”

—
The first leg was a who’s who of big finishers from the previous Tuesday’s individual race, USA’s Olympic bronze medalist Katie Zaferes taking the near side of the pontoon to get the best view of her rivals to the first buoy. Unsurprisingly, it was Team GB’s Learmonth pushing the pace with Netherlands’ Maya Kingma and Australia’s Emma Jeffcoat on her feet.

That first 300m swim leg was the only clockwise one of the four, and as they emerged out of the water and through transition, it was Learmonth, Kingma and Zaferes one, two, three, Jeffcoat and Germany’s Laura Lindemann right there too, France’s Leonie Periault 22 seconds back.

USA, GBR, Netherlands and Germany were pulling clear on the first bike lap, a pack of eight giving chase with Spain’s Anna Godoy Contreras, New Zealand’s Ainsley Thorpe and Japan’s Yuko Takahashi 20 seconds back halfway through the bike and now joined by Periault.

Learmonth was lightening fast through transition but all four were efficient, the gap now up to 26 seconds to chasers Jeffcoat and Verena Steinhauser of Italy.

Learmonth and Zaferes opened a gap on Kingma and Lindemann across the 2km run, but it was the German with the strongest kick and suddenly her teammate Jonas Schomburg had passed USA’s Kevin McDowell on the run to the dive and was opening up a gap out front in the swim.

Dorian Coninx was up next for France and only 26 seconds back at the tag, Marten van Riel for Belgium 35 seconds. Up front, McDowell stuck on Schomburg’s feet, Jonathan Brownlee and Marco van der Stel keeping the pace.

Coninx, van Riel and Gianluca Pozzatti (ITA) were 35 seconds back onto the bike, Andrea Salvisberg (SUI) and Kenji Nener (JPN) trying to reign in the leaders a further seven seconds back at the bell.

Another slick transition for GB saw Brownlee out onto the run first and accelerating away from McDowell and Germany and then Netherlands were 10 seconds back at the bell. Coninx and van Riel had dropped Pozzatti and were 30 seconds off the lead, Nener and Salvisberg now 53 seconds, Matthew Hauser for Australia 90 seconds off.

Brownlee was all in and rolling back the years, Coninx likewise as he closed the gap to 30 seconds and tagged Cassandre Beaugrand, Valerie Barthelemy tucked in on her feet for Belgium.

Georgia Taylor-Brown picked up the duties for GB and after the 300m swim was at her bike by the time Taylor Knibb emerged for USA, France and Anabel Knoll for Germany were now both battling with Rachel Klamer for Netherlands and Claire Michel for Belgium.

Knibb dropped Beaugrand and closed the gap to 22 seconds at the bell on the bike, Netherlands, Germany, Belgium, France now all locked together. Nicola Spirig was going all out for Switzerland 90 seconds back, Australia 2min 25s off the pace with Ashleigh Gentle trying to haul them back into the mix.

Into the shoes and out of T2, Taylor-Brown was smooth, Knibb now 11 seconds off, Germany, Belgium, France and Netherlands 40 seconds away and in need of a potentially medal-winning run.

GB’s star had 14secs at the bell to Knibb, 35 secs to Beaugrand who was flying over the 2km run and handing over to a hungry World Champion Vincent Luis, Barthelemy tagging Jelle Geens for Belgium and Justus Nieschlag taking up final duties for Germany.

Yee now had 17 seconds on Morgan Pearson for USA and he and Luis were straight onto the power so the only question would be if Yee could hold them off. Or if he would want to.

In the end, he had no choice. Luis was a man on a mission and at the bell powered beyond Yee, but the Brit was able to hang on to his back wheel. By the time they hit transition for the last time it was now Yee on the attack, and a slick T2 saw him out and away before Luis and Pearson knew what had happened.

A huge 2km run lay ahead. Pearson was well set just 5 seconds behind Luis, but it was Yee pulling clear. Luis then tired and Pearson was soon winning the battle of wills for silver, Yee managing to maintain his lead for two of the most intense 1km laps of his life.

But as Yee hit the blue carpet for the final time, it was his GB teammates gathering at the finish to cheer home the individual Olympic silver medalist home for a historic team triathlon gold, Pearson and USA taking silver, Luis and France the bronze. Jorik van Egdom brought home the Netherlands in fourth, Jelle Geens ensuring fifth place for Belgium.

TEAM GB
Jonny Brownlee
“I am incredibly proud just hearing Alex say that I inspired him in some ways, that means a lot. He’s an incredible athlete. These guys are incredible athletes and part of our role is to inspire people to do sport. It doesn’t have to be triathlon - just aim to do something, whatever that is. That is what is great about the Olympics, there are lots of great events for people to enjoy and one of them is triathlon and hopefully everyone at home enjoyed watching it.”

TEAM USA
Kevin McDowell
“I am at a loss for words with this team. To be honest, these three individuals have played a big role in where I am at today and all believed in me at different times. It was extra special to share it with them and I probably could have walked away from the sport much earlier, but they have instilled so much belief in me and for a lot of the things I have overcome.”

Katie Zaferes
“I just think it’s so amazing for our sport and to be able to show so many other people because we all love it and we know how special it feels compared to the individual when you’re racing for yourself, which is cool in one way but also to be able to race as a team and country. It was at a good time in the United States so i’m happy many people were able to see it and that as Team USA we showed what we can do. To have four athletes show up on the same day and perform is really awesome and to be both male and female, I just think it’s an incredible event. It’s such a special event and I am glad that everybody knows about it now.”

TEAM FRANCE
Vincent Luis
“My race was pretty special, Alex is someone I really appreciate and when he dives in front of you with thirty-five seconds, it’s basically you have to empty the tank in fifteen minutes when you have a twenty minutes race. I will let you imagine what were my last five minutes; not nice. That was a great race. Morgan and Alex are two really true racers.”

“Alex and I have a little story. Back in 2012, my first Olympics, I got asked by a friend if I had an Olympic gift to give to a young guy starting triathlon and I learned that it was Alex. This guy is the new man and you need to count on him. I also want to thank Jonny Brownlee for everything he has done for triathlon, that was amazing and I am really proud of my team. I hope I see you in all in three years.”