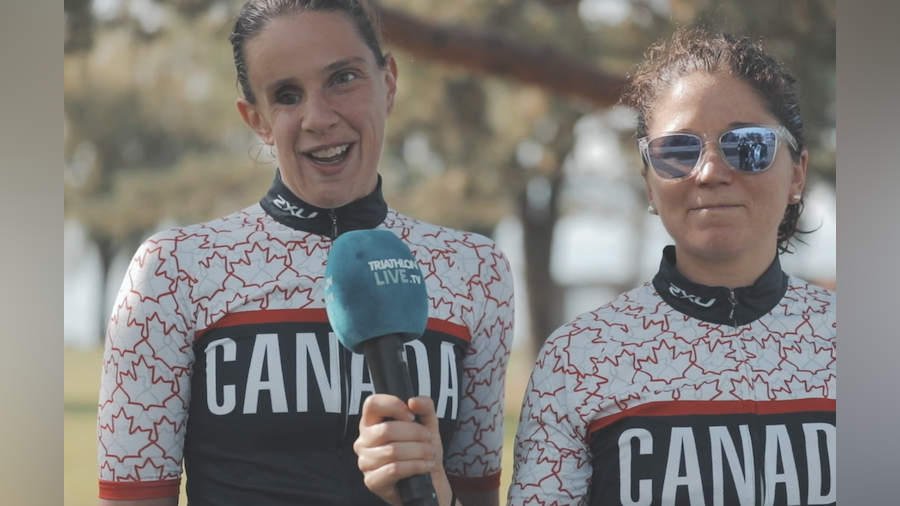 Canada’s Jessica Tuomela is a former Paralympic swimmer-turned-para triathlete heading back to the Tokyo 2020 course on which she won the Para Cup at the 2019 Test Event. The former Duathlon World Champion and 2018 WTPS Edmonton winner is also a force of nature, whose down-to-earth assessment of her formative years as a young kid with a visual impairment and on to her international sporting highs and lows are as disarmingly honest as they are cheerful.

You can watch the full Going Beyond interview with Lauren Steadman below, and follow Jess in the visually impaired para triathlon on 28 August, with coverage of the races from 6.30am local time in Tokyo, on the IPC YouTube channel.

—
“I lost my sight when I was about three and a half, and I grew up in a really small kind of isolated community and there weren’t a lot of resources available to my parents,” begins Jess, as she reflects on navigating small-town life as a kid losing their eyesight.

“I think they just sort of had this expectation that we just had to figure it out. I don’t have any siblings, but I had a lot of cousins. And in order to play with my cousins and interact with them, I just had to do things the way they were doing them. And there was some ‘adaptation’, though at the time, obviously we didn’t know that’s what it was called.”

Most of the time that adaptation was just holding onto somebody so she could go with them where they went, be part of the gang, hang out with the cousins and, to start with at least, it was relatively easy going.

“From age four to nine-ish, that’s kind of cute. Then when you hit about 10 years old, I think kids start developing their own individual identities. And it’s not as cute to be hanging on to each other. So I think grade four or grade five was when I started realising ‘oh, I am different’.

That was when being involved in sports also got more difficult, and the lack of provision for someone with Jessica’s condition became more amplified.

“The public school system was really uncomfortable with me being involved in sports. And so they, they blocked me basically at every turn. In gym class, their answer for me was to sit on the floor and roll this ball at the wall.”

The solution? Jessica found out about Canada’s School For The Blind and at age eleven, decided that was where she needed to be. Suddenly, opportunities to be more involved were everywhere and she did every sport possible. Too much, in fact.

“In grade eight they actually had to send me home for two weeks because I had burnt myself out by accident.”

Having grown up mostly afraid of the water, Jess was suddenly being told she had a real talent for swimming and that became a whole new motivation, getting her all the way to the national team for the Athens 2004 Paralympic Games.

“So a year before the Games I realised maybe I can do this. This was suddenly my first international competition, I’d sort of skipped a whole bunch of steps, so I didn’t feel I belonged there. And I went to Beijing and I struggled there, but felt like I belonged a bit more.”

After Beijing came retirement and a plan for a regular job until she came across some people training for triathlon and a seed was planted that never left until, in 2014 she realised it was time to do something about it.

“So I bought a treadmill and learned to run. Then I did my first triathlon in Florida, and it was hot, and apparently I didn’t know how to sweat and I was miserable and I walked the 5km wondering what I was doing. And I don’t know why, but I just kept going.”

Being able to bolt on a bike and run to a strong swim wasn’t easy. Then there was the fascinating world of the athlete-guide relationship that had to be nurtured. Jess will be with Marianne Hogan once more in Tokyo and describes the challenges and joy that perhaps inevitably stand at the heart of that instinctive mutual dependence, and the vulnerability that endurance sport inflicts on its protagonists.

“Triathlon is a team sport for the visually impaired, we have to work together. Plus, we probably should like each other, because you’re tied together. So you know, it’s not easy. It’s learning how to communicate so that it works for both of you, knowing how to motivate both of you at the same time. And just actually being willing to be that vulnerable in front of somebody else.”

“You’re so far into the hurt locker that, when you’re by yourself, for me, I felt safer going there. When I was swimming, especially when your face is down in the water, nobody really gets to see your pain face as much! But you know, the run is one thing that I struggled with and I still struggle with and I’m thinking that this person, my guide, is frustrated with me because I’m not running hard enough. And that’s totally not what’s going on in her head but, you know, that’s being willing to be that open and vulnerable and to hurt that much and in front of somebody else.”

Then there are the specifics of each segment of the race that are so important and unique and potentially race-defining but might, to the casual observer, go completely unnoticed. The fully blind athletes, for example, have to wear blackout goggles to make sure that they absolutely cannot see, because they also get a small time advantage over other PTVI athletes who have some usable vision. Then there is the variety of tether to the guide, which can be around the waist or around the leg.

“To be honest, I actually think the swim is the hardest because there’s no talking at all. If we’re talking, we’re not going fast enough. So it’s learning to feel your guides body without actually getting on top of them, which becomes tricky if it’s wavy or there’s a turn.”

“We are on a tandem bike, which is so much fun. It’s really cool when you’re in sync on a tandem, you just flow. To me there’s just such a feeling of grace and power, and it’s a pretty cool feeling. And then on the run I use a hand tether and we run basically arm to arm, like side by side, but we try not to touch each other. Cause obviously that sort of slows down your momentum. The biggest thing is guides are not to be towing the blind athletes at any point. So on the swim we have to be within a certain distance of each other and on the run, they can’t be ahead of us.”

Returning to a Paralympic start line 17 years after Athens will be a huge moment for the 38-year-old, where hitting the podium seems just what three-year-old Jess living in the wilds of Ontario would wish for her future self, along with anyone who has experienced her joyous personality. Her guide Marianne, of course, included.

“Every single time when we’ve crossed the line, I have felt nothing but gratitude towards this person and just joy and, I don’t know, just this feeling of like, “whoa, we just did that together!”

You can watch Jess in the visually impaired para triathlon on 28 August, with coverage of the races from 6.30am local time in Tokyo, on the IPC YouTube channel where available and local broadcasters.