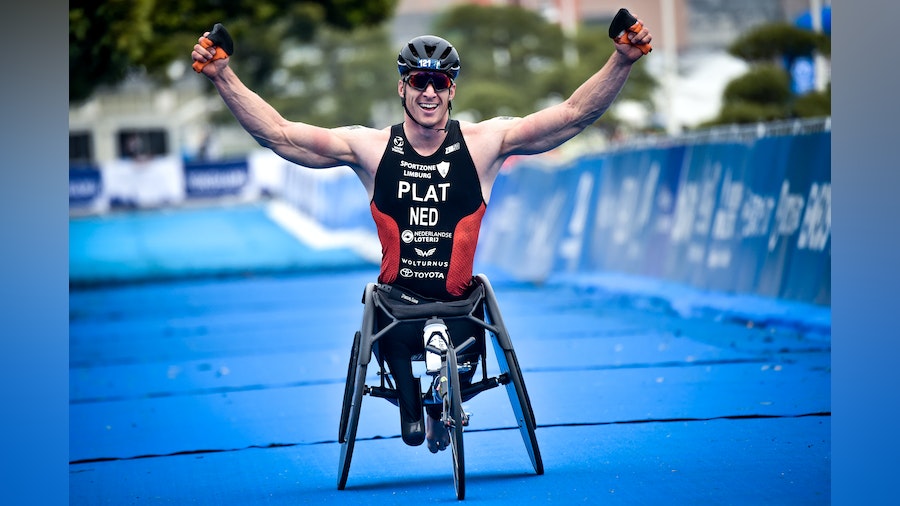 Netherlands’ Jetze Plat is quite simply one of the greatest para triathletes ever to take up the sport. With four consecutive world titles and a Rio 2016 Paralympic gold in the PTWC (wheelchair) class to his name, there are few who can match his record nor, for that matter, his remarkable physical strength. Listen to the full interview on the latest episode of the World Triathlon Podcast on Apple, Google or Spotify.

Born with an upper leg that was shorter on the left and completely missing on the right, Jetze’s upper body assumed huge importance to him from a young age. Whether it was climbing the stairs at home or keeping up with his siblings on his handbike, the strength he naturally developed would become his not-so-secret weapon in the world of international sport.

“One of my first goals in life was to have strong shoulders,” says Plat. “It started off as fun with biking aged five, as well as to find some independence, then I started swimming from the age of eight, then later on playing water polo in a normal team… Luckily I was born with bad legs but strong shoulders.”

It is testament to his abilities that earlier this year he was invited for a second successive time to a winter training camp in Namibia with the Dutch Olympic Triathlon squad, hitting the pool and the track with the likes of Jorik Van Egdom, Marco Van Der Stel, Rachel Klamer and Richard Murray and putting final preparations together for Tokyo 2020.

“In 2019, (Dutch national coach) Louis Delahaije asked if I could join the camp ahead of Tokyo, believing it would be good for me and that I could help motivate them too, and I was really proud to receive that call. I joined them for three and a half weeks last year and it was great. They’re a really nice team, so when Louis called me back again for this year I was glad to join them again.”

“In the swimming pool it’s always hard”, he admits. “I usually train alone, and the level there was really high, but that’s good for me. In the racing chair it is hard to combine with the runners but fortunately on the bike I’m strong enough to train with them. The swimming is probably the biggest part, but the whole schedule is so high level.”

The journey into para triathlon may not have been quite as smooth as a look through his impressive list of results would suggest, however. Debuting in the hand-cycling at the London 2012 Paralympics, the ever-competitive Plat had only one thing on his mind: medals. After finishing fourth, his motivation fell off so badly that he didn’t even want to get back on the bike again for months afterwards.

Instead, he hit the pool, setting himself a new challenge; to be able to do 100m freestyle in a minute. He may have got frustrated once again having never quite beaten an agonisingly close 1:01, but it did combine with the IPC’s announcement that para triathlon was to be included in the Rio 2016 programme. Having already tried the world of swim-bike-run just for fun in the past, Plat decided the time was right for the new challenge.

“So in 2013 I started some national para triathlon races and then it was time for the London Grand Final and I was so motivated once again it was clear I had to give it a try. We still laugh about those first World Championships. I think I was 8 minutes or something in front off the bike, and the rest of the field were like ‘who is this guy, what is he doing?’ but I was so slow on the running part (in the racing chair) that I lost a lot of time and Bill Chaffey passed me just before the finish line. We then knew the focus had to be the racing chair from winter 2013 to 2014 and I got better and better and then I was fast enough to not have Bill pass me anymore!”

Since then, Plat has smashed Kona records, finishing in under nine hours (the important thing is “to not think about how hard it is or how painful your shoulders are”), continued international hand cycling and dominated the PTWC class in para triathlon.

In fact, the two flat tyres the now 30-year-old suffered at the Chicago Grand Final in 2015 was the only time since that first wake up call at the hands of the great Bill Chaffey that he hasn’t finished first in a World Triathlon race. They also stopped him from gaining automatic qualification to Rio 2016, but that unexpected change in plans didn’t stop him winning Paralympic gold. Somehow it is hard to see how the one-year delay to Tokyo 2020 could derail his ambitions to top the podium again when Jetze Plat looks to defend his title on the morning of 29 August 2021.