by Chelsea White on 02 Aug, 2015 06:56 • Español
Gwen Jorgensen (USA) has won herself yet another gold medal, but this time the gold means a little bit more—she has automatically qualified herself for the 2016 Rio de Janeiro Olympic Games next summer. Breaking away on the third lap of the run, she was able to claim her spot at the 2015 Rio de Janeiro ITU World Olympic Qualification Event on Sunday in front of crowds of local Brazilian people on the beautiful beach side of iconic Copacabana Beach.

Gwen Jorgensen (USA) has won herself yet another gold medal, but this time the gold means a little bit more—she has automatically qualified herself for the 2016 Rio de Janeiro Olympic Games next summer. Breaking away on the third lap of the run, she was able to claim her spot at the 2015 Rio de Janeiro ITU World Olympic Qualification Event on Sunday in front of crowds of local Brazilian people on the beautiful beach side of iconic Copacabana Beach.

Finishing with a time of 1:58:46, Jorgensen’s victory is her 12th straight win if you include the 11 ITU World Triathlon Series races she has consecutively conquered.

“I have been working towards this for a while, since the London Olympics, so I am excited to be able to come back here next year,” said Jorgensen on qualifying for the 2016 Rio Olympic Games.

Claiming the silver and bronze was Great Britain’s Non Stanford and Vicky Holland. Stanford pushed hard in the last two laps in order to stay within a close proximity to Jorgensen, which ultimately landed her the second-place position.

Holland battled for her bronze medal over a one-on-one fight with Sarah True (USA). Kicking up the intensity in the last lap, she was able to break away to finish third. True ended the day in fourth, but was able to officially qualify as the second U.S. women for the Olympic Games.

Unlike the USA, Stanford and Holland did not automatically punch a straight ticket to Rio for next year. Great Britain qualifications require another podium finish in the World Championships later this season, but both women can rest easily knowing they have the accomplished the first step in a two-step process.

“For us this is step one, but probably the most significant step. But once you have done one step, the next step gets a little bit more obtainable,” said Stanford. “I was unsure how it was going to go today, I had eight weeks of good training, but before that I was training and running all over the place. Back in February I just thought about doing steps, so to think I have gone from there to then come in second in the Test Event, it just shows the progress I have made. I am as happy as most really.”

The race began with clear skies and the hot sun beating down on Copacabana Beach. The women entered with a beach start that saw Mexico’s Paola Diaz unable to compete after an immediate tumble in the sand. After just one out and back lap in the swim, Rebecca Clarke (NZL) and Pamella Oliveira (BRA) led out of the water to get a start on the bike.

The eight-lap technical bike course, saw a pelaton of 27 strong lead through the leg. Flora Duffy (BER) held out in front, leading the charge over the likes of Jorgensen, Stanford, Holland, True, Katie Zaferes (USA), Jodie Stimpson (GBR) and Barbara Riveros (CHI). The large pack managed to maintain a healthy lead over the chase by just over a minute, which was led by Ashleigh Gentle (AUS).

Heading out of the second transition, a foursome quickly formed between the Americans and the Brits. Jorgensen, Stanford, Holland and True paced together for the first two laps before Jorgensen pulled away in her signature fashion. Stanford was able to keep up for one lap, before losing steam and guaranteeing the win for USA.

Commenting on the difficulty of the course, Jorgensen said, “the swim was tougher than I was expecting, it was a little bit rough for me and I didn’t come out where I wanted to, but thankfully I was in that front pack. It was a pretty big front pack, I thought it would be more split up than it was. It was also hot, we race early in the morning but it was still super hot out there.”

Zaferes finished the day in sixth place, but did not automatically qualify since two other USA women finished before her.

Riveros had a standout run and finished sixth overall, but she already holds an Olympic spot after winning the 2015 Toronto Pan American Games in July. 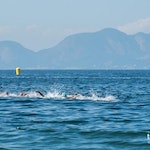 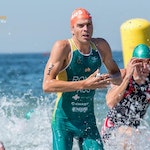 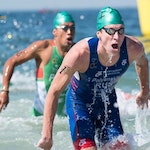 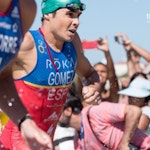 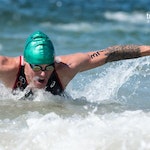 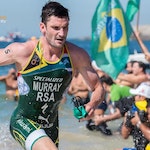 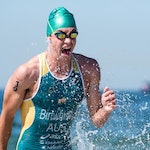 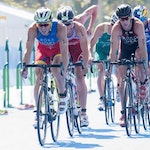 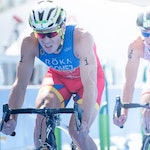 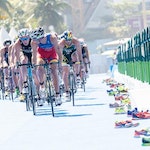 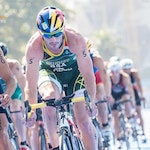 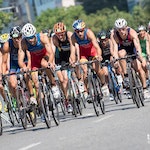