by Olalla Cernuda on 18 Aug, 2018 06:02 • Español
The Norwegian team proved once more that they are always to be considered when confronting a tough and challenging bike course. And in Lausanne at the 2018 World Cup it was Gustav Iden surprising all the favourites to claim the victory, with Jonathan Brownlee following him in second place and another Norwegian, Kristian Blummenfelt, grabbing the bronze medal.

At Saturday’s Lausanne World Cup, it was the Norwegian team that proved once again they are always going to be in the hunt for medals over a tough and challenging bike course as Gustav Iden surprised all the favourites to claim the victory, with Jonathan Brownlee following him in second place and another Norwegian, Kristian Blummenfelt, grabbing the bronze medal.

After claiming all the podium positions in WTS Bermuda at the begining of the season, the Norwegians have had an up and down season, but arrived in Lausanne knowing that the hills and technical course in the Olympic capital looked like a perfect fit for them.

On a hot and humid afternoon in Lausanne, the 1.5km swim did little to determine the race, with almost all the athletes exiting the water together, knowing that it was likely to be the bike the leg that would define the race.

Right at the beginning of the bike section, Jonny Brownlee decided to attack and test the field, with Andrea Salvisberg (SUI) the only athlete following. Behind the pair, Blummenfelt and Casper Stornes (NOR) led the chasers, never allowing the Brit a clear breakaway.

But lap after lap, hill after hill, the group saw repeated attempts to break clear, all of them without luck. First it was Blummenfelt trying to open a gap, helped by Iden. Next lap it was Leo Bergere (FRA), and then Germany’s Jonas Schomburg gave it a try. But on the bell lap, the huge group was still riding together, saving their legs for the 10km run under the sun.

With a group of more than 30 athletes entering T2 together, quickly after transition Jonny Brownlee and Kristian Blummenfelt positioned themselves ahead, followed by Iden and Bence Bicsak (HUN). Just when it looked like Jonny and Kristian were going to sprint it out to the end, it was the younger Norwegian, Iden, who added an extra gear to his pace and flew past both of them.

The distance kept increasing, while Brownlee and Blummenfelt managed to leave Bicsakc behind in the last kilometer, knowing that the medals will be decided between them. All smiles, Iden crossed the finish line with the fastest run split of the day, to stop the clock on 1h49’48’’ and claim a second World Cup win of his career and the second podium of his season after his third place in WTS Bermuda.

And sprinting the last meters, a determined Brownlee grabbed the silver medal, with Blummenfelt crossing the finish line in third place. Bicsak claimed fourth and fifth was Joric Van Egdom (NED), helped one of his best swims ever.

“I didn’t feel quite alright on the bike course today, but that allowed me to save some energy for the run, which I think was a good thing today”, said Iden after the race. “And then I felt so great in the run. The pace was too slow at the start, and the coach told me that the guys behind us were catching up, so I just had to put the extra gear on. And when I saw that no one else was following I thought that this was the race to win”, he explained.

Brownlee seemed delighted with his second place. “I came here to win and to enjoy racing again and I certainly enjoyed it. I felt good in the run, I thought Kristian was going to go hard but then I saw another Norwegian passing and I thought ‘oh, here we go’. but I had fun, and really enjoyed it. I made a few mistakes, I dropped all my gels, but I love racing, and I love racing to win and to enjoy it. I train very hard to then enjoy races, and this was perfect for that. Here there were attacks, tactics, tough hills… and that’s what we are here for. This is the first time I’ve been here as a senior, and Lausanne is just fantastic. It’s a beautiful city, a tough course, lots of spectators…  When I heard there was a World Cup here I thought ‘I wanna race here, this is the perfect venue for triathlon’”, he said.

Blummenfelt also recognized the hard course in Lausanne, but also enjoyed it. “It was a very tough course, especially on the bike, so it feels great to be on the podium. I knew that Gustav was gonna be hard to beat on the run, he’s been running really well lately, but I was able to keep the third place. Team Norway has had some up and downs this seasons, but we have been able to get some good results”, he said. 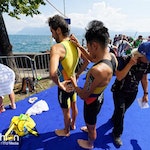 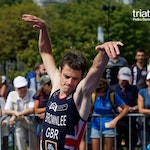 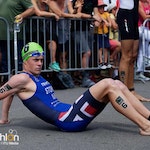 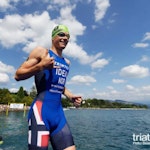 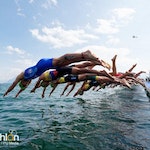 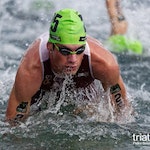 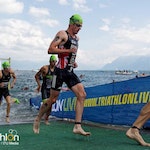 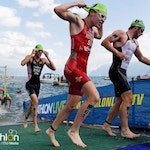 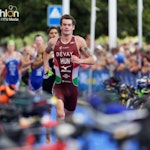 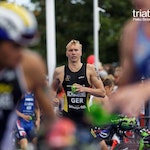 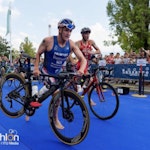 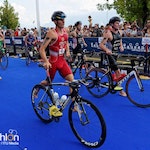