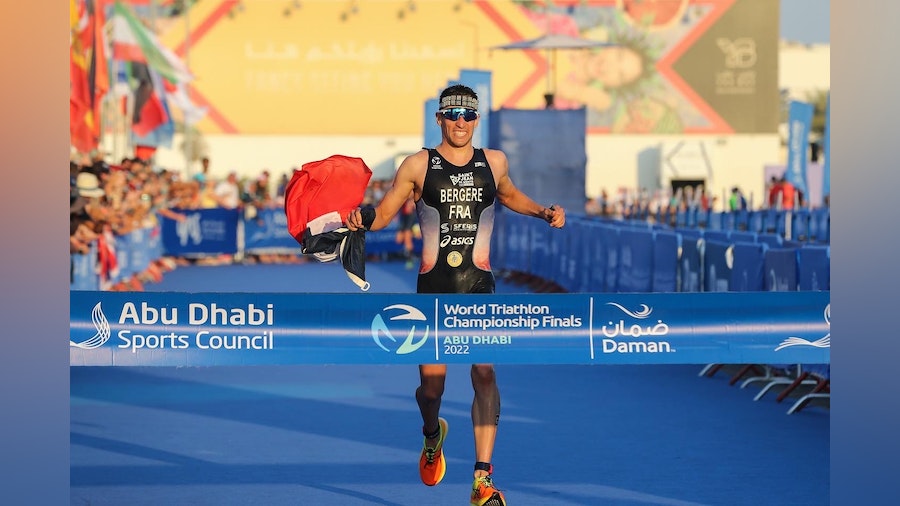 The race could hardly have been any tighter, and the result certainly could not have been any better for Leo Bergere of France, as a first Series gold of his career sealed a remarkable first world title on Saturday afternoon.

Standing third in the Maurice Lacroix World Rankings heading into the Championship Finals, he knew that only a win could put him close to the trophy. Even then, both Alex Yee and Hayden Wilde had the title in reach.

But it was Bergere onto the front pack out of the water and driving the bike, even after the chasers closed in over the final laps, there was no catching him over the 10km run. USA’s Morgan Pearson was piecing together a phenomenal run of his own, scything through the field to hit second, Geens’ late surge to bronze preventing Yee from taking the title, Hauser’s fifth ahead of Wilde preventing the New Zealander doing the same.

“It’s insane, I don’t know what to say, I didn’t want to do the maths before the race I just wanted to race it all out and try for the breakaway,” said a thrilled Bergere. “We went for it as a team, and I cant believe today. I was really focussed on what I was doing, I didn’t want to think about anything else. I was chasing this win for a long time and I knew I was capable, I just needed all the stars to align, and to do it here at the final in Abu Dhabi is incredible. Thanks to everyone in my corner.”

Schoeman and Luis back out front in the water

Race number one Hayden Wilde took up position on the far right of the pontoon and was joined by French teammates Vincent Luis and Leo Bergere, Alex Yee assuming his spot at the opposite end and joined by strong swimmers like Mark Devay, Takumi Hojo and Jonathan Brownlee.

The returning Henri Schoeman was hot on the heels of perennial swim leader Mark Devay at the turn on lap one, Luis next on a string of athletes zoning back in on the exit for the start of lap two.

Jonathan Brownlee was 12 seconds back, Wilde 15, Alex Yee 8 seconds behind the New Zealander and with Gustav Iden in front, Kristian Blummenfelt behind.

It was Devay and Luis out at the end of the 1500m inside 18 minutes, Tayler Reid (NZL) just off the duo, Wilde 23 seconds and Yee a further 18 seconds away from his title rival.

Yee catches on to Wilde pack

David Castro Fajardo was out alongside Schoeman and Luis while Wilde was with Miguel Hidalgo trying to make up ground and get on the front pack, Yee likewise but looking for Blummenfelt’s back wheel.

Fourteen athletes were riding together as the riders got their teeth into the first lap, Luis back on front as he was in Bermuda and looking every bit as determined.

A big chase group had come together 24 seconds off the leaders, both Wilde and Yee now in there together, Hauser and Vilaça at the back, Geens didn’t manage to get onto that pack and all the while Bergere and Luis were powering on the now 9-strong leaders as the hit the gas.

By the start of lap 5, the gap was up to 56 seconds, and after Ren Sato and Jack Willis both came down heading back into transition, only some smart handling from Wilde and Yee prevented them also getting into trouble, the group slowed but not significantly and everyone back up and riding.

Chasers leave it late to close the gap

With three laps to go the gap was still bang on a minute, Yee, Wilde and Blummenfelt staying firmly on the front of the group to avoid any potential issues through the turn into transition and then accelerating over laps eight and nine to close the lead to 36 seconds off the bikes.

Bergere had a fluid transition and hit the front with Brownlee and Reid but suddenly the likes of Yee and Wilde were getting within range of the French trio.

A small group of ten were now giving chase, Yee and Wilde with Kevin McDowell, Pearson, Hauser and Geens while Bergere was alone out front by the end of the first 2.5km lap, Wilde looking like he was struggling as he hit the slight incline and back out onto the course.

Yee looked strong on Geens’ shoulder and at the bell it looked like he could find the all-important bronze once Pearson was out of range, but the Belgian responded well to the attacks and there was nothing Yee could do.

Wilde had made an incredible recovery to put himself back into contention, but the marauding Hauser passed and into fifth to end those title dreams and ensure Leo Bergere took his place at the top of the world at the end of a season that had it all.

For the full results click here.
—
“That’s a nice way to come back to this stage,” said Pearson. “It’s been a long year. I didn’t race until two weeks ago and then I raced in Chile and had mechanical issues on the bike. I just took a step back after which let me just focus on the process coming into the race. A little bit cliched but that’s all I did today. It’s been a really long season for all these guys so it’s hard to gauge because I know how hard training and racing is but I really had a hard year myself. I had a great support system around me and I am glad I stuck to it.”

“I am glad we could put on an insane show,” said Series runner-up Yee. “I just gave everything out there. I was really suffering with cramp on the second lap of the run and just didn’t have it in the end. It’s been an amazing year and when reflecting on that as the outcome of the year, I’ve been really proud of what I’ve achieved and second in the world is not bad.”

“The run is normally my strength so I don’t really know what happened there,” said Wilde. “I’m going to have to go back and assess. First lap was rough. I think I was a bit flustered when Morgan (Pearson) attacked and I couldn’t go but second to fourth lap I felt really good and I was actually gaining back but it wasn’t enough on the day. I had a great swim, I just missed that front group and that could’ve been that. Third place, you’ve got to be stoked with that and we just have to move forward from here.”