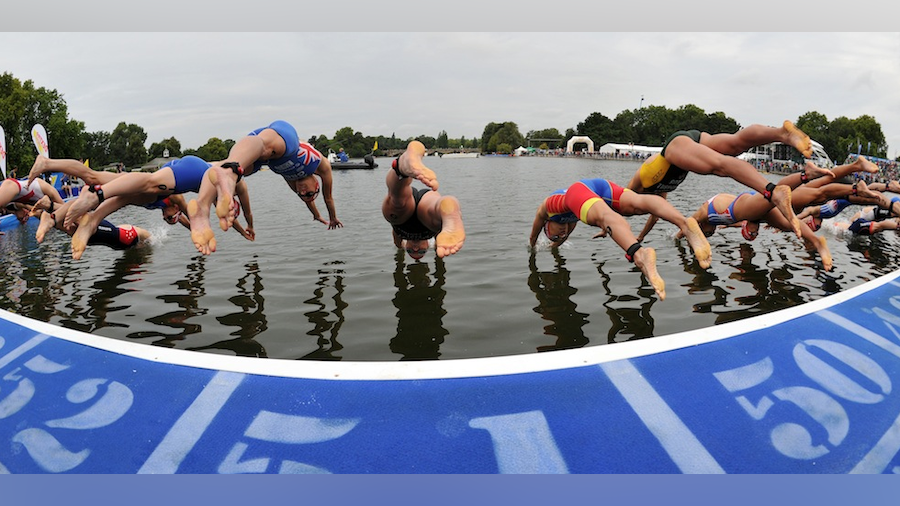 The official pontoon draw for the women’s triathlon competition at the London 2012 Olympic Games has taken place, with leading women favouring the start from the left side of the pontoon for the swim in the Serpentine on Saturday.

In the blind selection that was conducted at the Hyde Park venue, the top ten athletes in the ITU Olympic qualification rankings were first to select their starting positions.  After the occupied positions - but not individual athlete names - were revealed on a big screen, the remaining athletes chose their places.  The exact spots of the top ten selections were not shown until the end of the draw. New Zealand’s Andrea Hewitt was first to pick and chose slot number 55, the very end of the pontoon on the left side, and said the direct line to the first buoy was her main reason for choosing that side.

“Like other races I like to go on the inside, to be on the inside around the first buoy,” Hewitt said. “So that was my strategy, although I think the pontoon is pretty even, I think it’s even both sides, it’s always good to have the inside line. I figure in London I’ve been in the middle of the lake and that was fine.”

Hewitt will have 2011 ITU World Champion Helen Jenkins (GBR) directly on her right in spot 54, followed by Beijing bronze medallist Emma Moffatt (AUS) in 53, Canada’s Paula Findlay in 52, Ireland’s Aileen Morrison in 51, Chile’s Barbara Riveros Diaz (CHI) in 50 and and Great Britain’s Vicky Holland in 49. Switzerland’s Nicola Spirig, who was fourth to pick and the USA’s Laura Bennett, who chose fifth, chose to position themselves slightly in from the edge at numbers 47 and 46 respectively.

Lisa Norden, the 11th woman to choose her place, put herself in the middle of Holland and Spirig in 48. With the left side of the pontoon quickly filled up, Russia’s Alexandra Razarenova and Irina Abysova were some of the few athletes who intentionally chose a place on the right side of the pontoon, and will start from positions 3 and 4 respectively. Others to watch include Australia’s Erin Densham who will start from number 40, flanked by Japan’s Mariko Adachi on her left and Ai Ueda on her right. Jessica Harrison (FRA) is on Adachi’s left in 41 and Sarah Groff (USA) in 43. Great Britain’s Lucy Hall will start on the right side of the pontoon in position 6, beside Yi Zhang of China and Yuyila Yelistratova of Ukraine. Harrison said she wasn’t surprised that all the leaders had picked the left side of the podium, given the direct line to the first buoy.

“The left side is way better than the right side in terms of sight into the first buoy and weeds,” Harrison said. “So I would be very surprised if anyone in the top 10 had picked anywhere to the right and it was just going to fill up from there.”

Just before the draw, the technical delegates presented the athlete briefing where athletes are informed of all the important technical and logistical details regarding the triathlon competition.

The women’s triathlon competition at the London 2012 Olympic Games gets underway at 9am (local time) on Saturday August 4. Check listings with your national Olympic broadcaster for viewing details. There will be no live stream or timing from ITU, but you can follow the race with live text at triathlon.org/live and on Twitter through @ITUonline and @triathlonlive