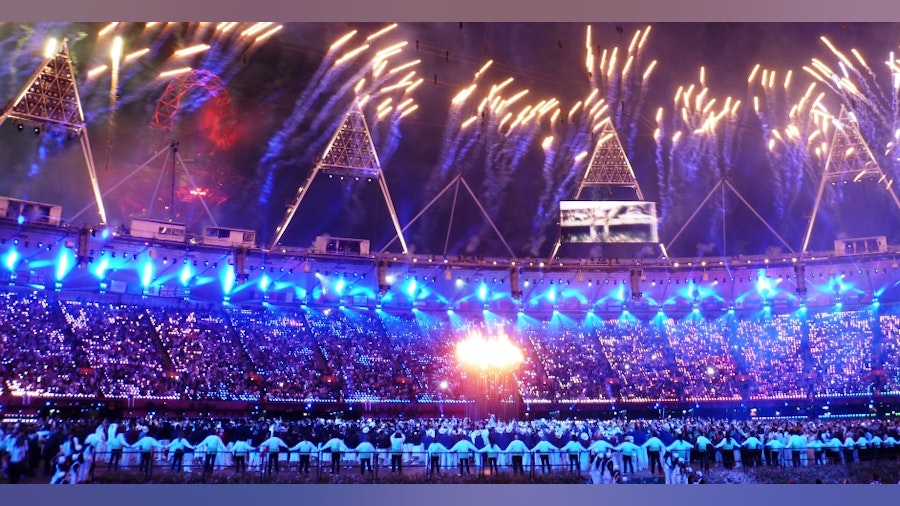 The highly anticipated Opening Ceremony of London 2012 began with an imagined trip along London’s iconic river, the Thames, from its source in Gloucestershire to the Olympic Stadium in east London.

The countdown to the start of the Ceremony was marked by 96 children standing around the Stadium with popping balloons, followed by the Olympic Bell ringing in the official start of the Opening Ceremony.

Loud drumming indicated the beginning of ‘Pandemonium’, a depiction of the Industrial Revolution in Britain. A giant ring was forged in the centre of the stage which was raised to join four others and form spectacular Olympic Rings above the Olympic Stadium.

Also during the Ceremony, the Olympic Flame made its way along the Thames in a boat piloted by David Beckham. He played an important role in bringing the Games to London and has been a big supporter ever since. Carrying the Torch on the boat was Jade Bailey, a young footballer tipped to become one of the sporting stars of the future.

At the heart of the Opening Ceremony is the Athletes’ Parade where teams enter the Stadium in alphabetical order, with the exception of Greece which always has the honour of marching in first, and Great Britain who entered the stadium last as the host nation. Catch up with all the news and highlights from London 2012 at triathlon.org/olympics/live