For the second year in a row, the World Triathlon Series Grand Final came down to a furious finishing chute battle between Spain’s Javier Gomez and Great Britain’s Jonathan Brownlee. And for the second year in a row, it was Gomez who pulled out a killer kick to edge ahead and this time it was enough to claim his third Elite Men’s ITU World Championship title in London on Sunday.

“It feels amazing to be world champion, I can’t really believe it,” said Gomez after his victory. “It probably wasn’t my day for running, I felt quite tired, so I was just working hard on the sprint, on the last kick. It’s amazing to be champion, I’m so happy.”

In a pulsating last 200m Brownlee initally broke away and looked like he would be victorious in front of the home crowd, but with the line in sight Gomez fought back brilliantly to claim victory by just one second, finishing in one hour, 48 minutes and 16 seconds. Gomez said afterwards he planned his kick to perfection.

Jonathan Brownlee’s second-place finish means he claimed silver medal in the overall world championship rankings, and he was disappointed he couldn’t retain his 2012 World Championship title at home.

Mario Mola (ESP) finished third in 01:49:10, which also meant he snatched bronze in the overall rankings.

It was one race too many for Alistair Brownlee, however, whose on-going Achilles injury finally caught up with the Olympic champion and rankings leader before the Grand Final. Alistair had won the past 10 consecutive Olympic distance races he’d competed in on the ITU circuit, including three this year, and he was in his usual position in the lead group during the swim and the bike. But he began wincing visibly at the start of the 10km run and soon started to drop away from the leaders. He courageously continued to fight his way to the finish, outrunning other athletes despite limping significantly, and even stopping during the dramatic sprint finish to cheer on his brother. Alistair eventually finished in 52nd place, which saw him finish fourth in the overall rankings to just miss out on a world championship medal, but he said he didn’t entertain the thought of pulling out.

“I think it was just that it was really cold at the start and then I warmed up and it felt alright and then it went again at some point,” Alistair Brownlee said. “I probably should have pulled out, but I’ve never pulled out of a race in my life and I’m not going to start now.”

Before the late drama, it was Richard Varga (SVK) who took the initiative in the 1.5km swim, breaking into an early lead and ultimately getting out of the water first in 17:04, with Australia’s Aaron Royle and the Brownlee brothers in close pursuit.

It didn’t take long for the Brownlees to get into a familiar position, pushing along the lead group by the end of the first lap of the 40km bike. But Jonathan didn’t stay there for long as he intentionally fell back to the back of the lead group to remonstrate with athletes for not contributing to maintaining the pace.

At the halfway stage of the bike, a lead group of 13 were 40 seconds ahead of the chasing back and although South Africa’s Richard Murray – one of only three athletes other than the Brownlees and Gomez to have reached the podium this year – worked hard to drag along the chasing pack they couldn’t gain much ground. The chase group also included Frenchmen David Hauss and Laurent Vidal who had fond memories of the course in London, having finished fourth and fifth respectively at the London 2012 Olympic Games, and Mola - who was a consistent podium performer this year.

A second chase group was led by Sven Riederer (SUI), who often saves his best for the Grand Final having reached the podium in 2011 and 2012. As the rain started to fall, Riederer used his expertise in cold and wet conditions to help the group gain 15 seconds on the fourth lap to within 50 seconds of the leaders.

The first alarm bells that all was not right with Alistair Brownlee came during the last lap of the bike, when he tried but failed to break away from the pack. And it soon became clear that Alistair’s Achilles injury was causing significant problems as he dropped through the field as soon as the run got underway.

It left Gomez and Jonathan Brownlee to fight it out in a thrilling 10km race, knowing a win in London would also secure the world championship. Both athletes had multiple turns to break away without any real success before the last-ditch, dramatic finale unfolded.

Behind them, it was Mola who turned out one of the performances of the day. Leaving transition 30 seconds down on the leaders, he moved into third just at the start of the bell lap of the run. While the pace of Brownlee and Gomez proved too much to catch them, Mola finished clearly in third, enough to earn his first overall ITU World Championship medal. 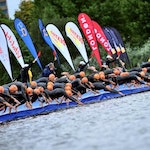 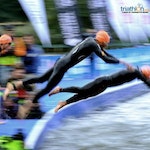 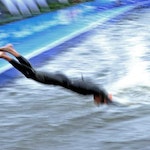 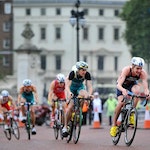 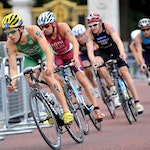 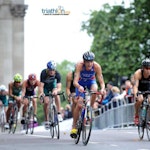 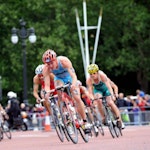 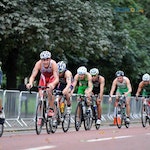 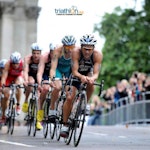 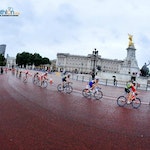 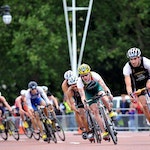 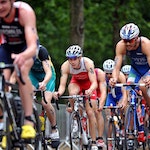