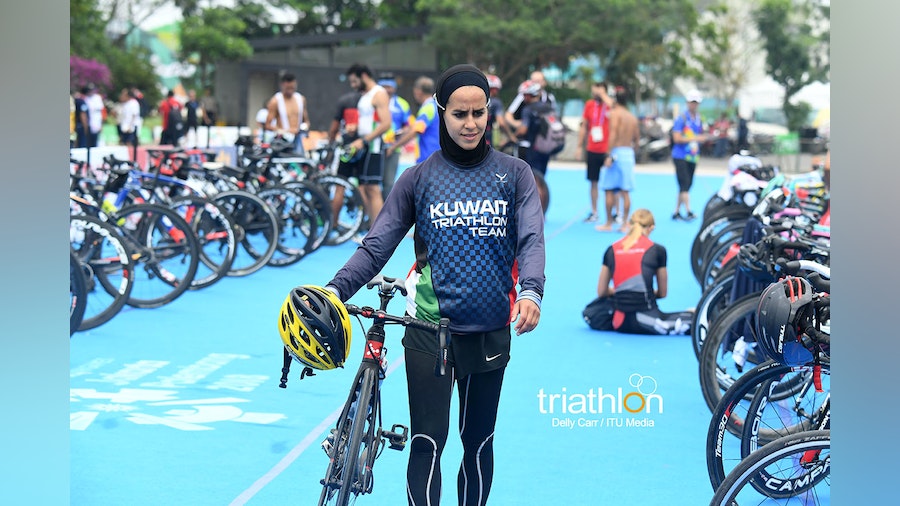 Najla Al-Jeraiwi has been a pioneering force in Arabic sport as an equestrian show jumper, cyclist and now triathlete and coach and has recently graduated from the Women’s Sport Leadership Academy (WSLA) High Performance Coach course, that began back in 2019. The female coach from Kuwait was invited by World Triathlon to join peers from five other International Federations. selected by ASOIF, to take part in what was the first third-party initiative to be funded by Olympic Solidarity.

“The WSLA experience was amazing. I did not know what to expect from this course and it turned out to be something amazing, an added value to my career. I had to reflect on what I was doing and also on my vision and philosophy as a coach.
“When I started out in triathlon, it wasn’t normal to see women being outdoors and doing sport. I had such a hard time finding a facility to swim and to coach. We only had the chance to train at 5am as girls cannot be at the swimming pool during the day as this is when the men swim and this is still an issue to be honest, we can’t get access to the swimming pool as much as the guys.

“But now women’s sport is really changing in this region. Now you see a lot of girls taking sport seriously. We have more opportunity for girls to join other sports, so women’s sport is starting to evolve now and being accepted by society and the culture.”
As a coach in Kuwait and recently graduated from the Women’s Sport Leadership Academy (WSLA) High Performance course, Najla Al-Jeraiwi reflects on the experience to join and connect with coaching peers from other International Federations and share coaching philosophies.

“The WSLA experience was amazing. I did not know what to expect from this course and it turned out to be something amazing, an added value to my career. I had to reflect on what I was doing and also on my vision and philosophy as a coach. The athletes I train do have the potential, the most important thing and the hardest thing is to keep them in the sport. If I can keep them all in the sport, it will be a very successful thing to do here.”

Basmla Elsalamoney from Egypt emerged on the triathlon scene in 2016 with a junior women’s cup victory. The Egyptian triathlete then went onto the 2019 African Games held in Rabat, Morocco, where she won the elite women’s event and claimed the bronze medal in the triathlon mixed relay event. Later in 2019 Basmla competed in her first World Cup in Weihai, China, on the ASICS World Triathlon team.

Joining the ASICS World Triathlon Development team has provided Basmla Elsalamoney with experience and new skills, enabling her to improve and progress as an elite athlete.

“That was the greatest opportunity I have had in my career so far. Being in the team is amazing since it started where I got the opportunity to race in the Weihai World Cup. They have supported races and giving me so much experience.”

“In 2019 I had an accident on the road and got hit by a car when cycling. It was just one month until the African Championship which was a very important race to secure my position in the Olympic simulation. I couldn’t make it to the African Championship, I had to stop training for two months, have surgery on my knee and then sort again to train gradually until I got the opportunity to race the African Games. They entered my name one day before closing.”

“After the surgery, you start the hardest part with the rehab. I am thankful I had the people around to help me overcome that obstacle and continue to do what I love to do. I know that mental support that I have from the people around me was very helpful at that time.”

On International Women’s Day we asked Basmla Elsalamoney to share those people in her life that she draws inspiration from.

“I think the first person I need to talk about is my mother, she is the most supportive person in my life. When you have great women around you to support, it makes a difference.”