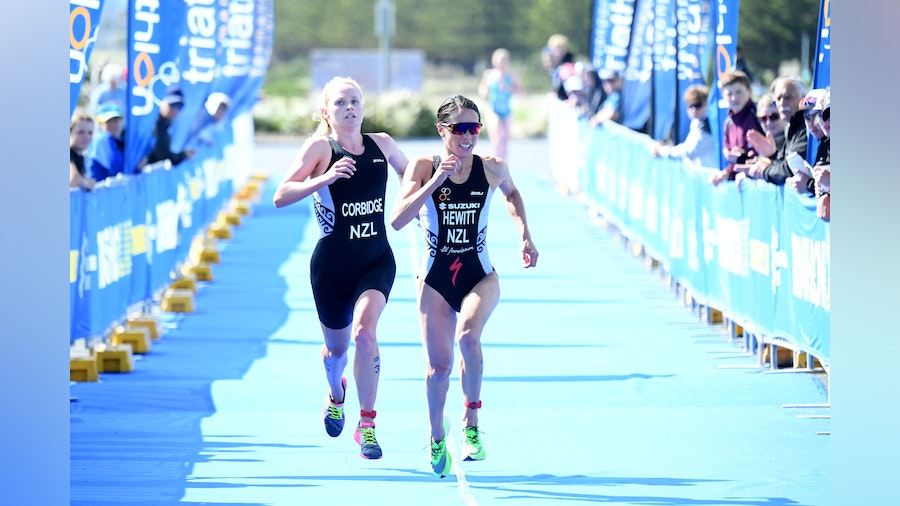 Stacked start lists of athletes lined up for the 2020 OTU Oceania Elite and U23 Championship.

Located on the North West Coast of Tasmania alongside the Mersey River and the Bass Strait coast, the sprint course in Devonport was made up of a coastal swim, 4-laps on the bike and finished with a run across 2-laps.

Australia’s 2018 Commonwealth Games representative Charlotte McShane was also in the mix of the leading women.

Ainsley Thorpe from New Zealand was among the leaders out of the swim with Backhouse and Hedgeland.

The same group of women maintained pace and worked together on the bike but it was New Zealander Hewitt who produced a phenomenal run stike to move into third place.

On the final stage of the run portion of the sprint race, it was Thorpe who had reserved power in the legs to race to victory and claim the gold medal. In a thrilling sprint finish it was Hewitt who earned the silver medal and Corbridge the bronze, ensuring a podium sweet for the New Zealanders.

“I came here today really wanting the win. I have worked hard and knew I had form so I am pleased I was able to do it,” said Thorpe.

“I was in that second group so I just had to run as hard as I could today. I had a break last year and I changed to the mixed team relay training so I have done a lot of speed work and picked up my running. I am looking forward to racing soon and seeing what the year,” Hewitt said.

The men’s race was stacked with a mix of experience and emerging talent.

Australia’s Marcel Walkington dominated the race with a brilliant set-up across all three disciplines and sprinting home with the gold medal.

“It’s good to come back into Devonport and come away with a decent race. We really had a good group on the bike and committed to working together to stay away. I think we weren’t making time but we knew that we were holding our position so I think that was enough for all of us to stay motivated onto the run. Having a good result sets me up for a good start to the year so I am happy with that.”

Australia’s Brandon Copeland (who was 5th place in the 2019 ITU U23 Grand Final, Lausanne) applied the pressure with an impressive run leg, to chase down New Zealand’s Tayler Reid and force a sprint finish. Reid edged in front right before the finish to earn 5th place and Copeland crossed in 6th position.

It was clean sweep of the podium for New Zealand in the Elite women’s race and it was Australia who dominated the medal tally in the Elite men’s race.