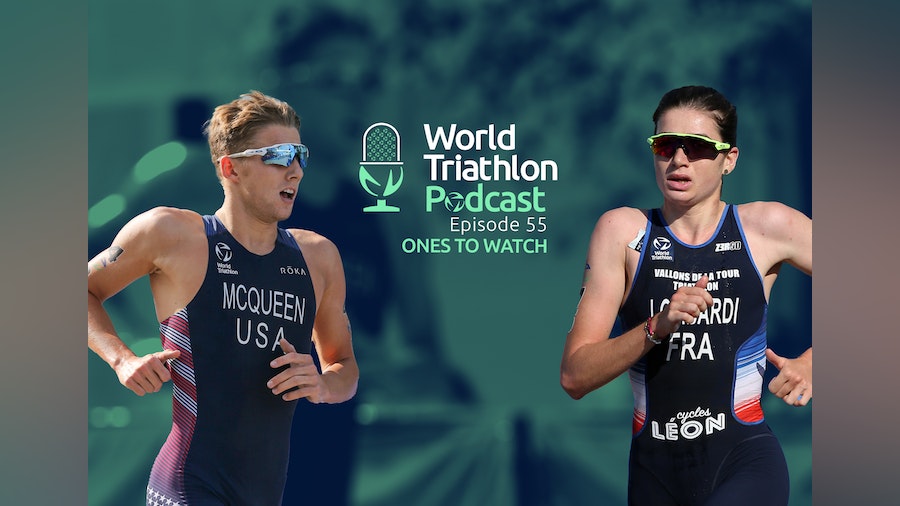 The World Triathlon Podcast kicks off a new series of interviews through February and March with the breakout stars looking for a big 2022, beginning with Emma Lombardi and Chase McQueen.

Just two years after becoming French Junior Triathlon Champion, Emma Lombardi made something of an entrance at her first ever World Triathlon Championship Finals appearance back in Edmonton last August: after a strong swim and bike, she began pulling clear of the rest of the U23 field over the second half of the 10km run, going on to become U23 World Champion by over a minute in her first ever Olympic-distance race.

Where did she come from and just how did she do it? You can hear the full interview on Spotify, Apple and Google.

—
Emma Lombardi grew up dedicated to the pool and swimming was her first love before the lure of the great outdoors drew her to the bike and run. It’s a time-honoured route, one that for many young French athletes involves making their first moves on the Grand Prix circuit. For Emma, that meant joining Vallons de la Tour, the team based between Lyon and Grenoble in the west of France, at that time in the national second division.

It was a formative experience shared by the likes of Vincent Luis and Dorian Coninx, but there are plenty of international names who cut their teeth or sharpen their racing there, from Non Stanford and Emma Jackson to Javier Gomez and the Brownlee brothers.

“I’ve been with the team for five years now, since before we got to the French Grand Prix because there are three divisions. We have Angelica Olmo on the team, and we can thank her for bringing in Nicole Van Der Kaay too.”

“I think it’s really interesting racing… it’s a really good school before going on a European or World Cup, good experience. It gives you a little taste of what international racing is and I learned a lot against people like Cassandre Beaugrande and Leonie Periault. They were all very impressive.”

Emma admits she is also a big fan of Jessica Learmonth’s racing style, as anyone who saw the way that she attacked the Edmonton course might appreciate.

“That was definitely my breakthrough race. I was really surprised because it was my first Olympic distance and my first World Championships. So before the race, I was like ‘okay, let’s see how this goes.’ I was relaxed because I knew my preparation was good, but we all had to work hard on the bike so it took some time to find my legs.”

Find them she did, though, dropping her rivals including Olivia Mathias and Kira Hedgeland shortly after the halfway point to run solo for nearly 4km to take the gold by over a minute, just as teammate Emilie Morrier had in Lausanne two years earlier.

“For several days after I still couldn’t believe I had won, it felt very surreal, like ‘no, no that wasn’t me’. I needed to take some time for it to sink in. Two days after I got home I had a training accident and broke a finger and I would have loved to have seen what I could have done in another race but it obviously didn’t go as planned. Now things are looking good and I’ll be ready to go again in March.”

With several years still left racing at U23 level, there is clearly no hurry to rush the all-important next stage. But for an opening salvo into the world of international triathlon, 2021 is going to be a tough act to follow. You can listen to the full interview with Emma Lombardi and Chase McQueen below and watch back the U23 World Championships from Edmonton on TriathlonLive.tv.