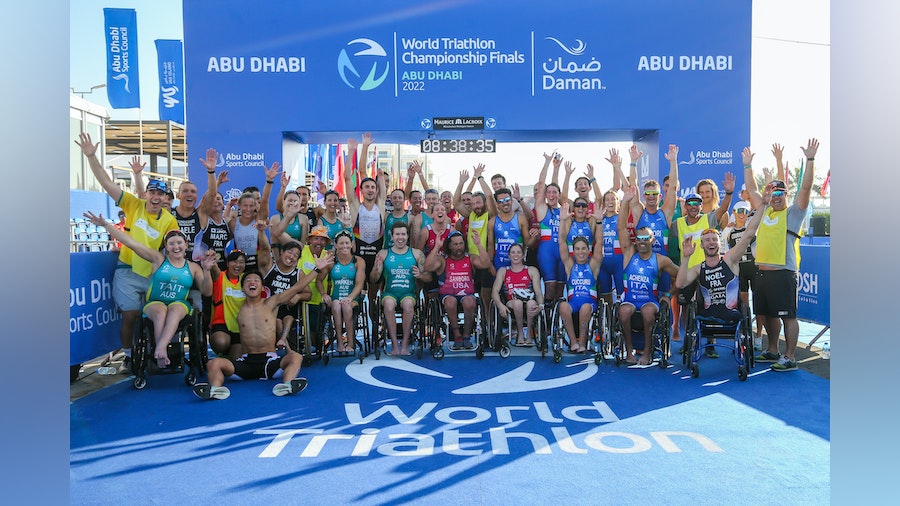 For the first time ever in the sport, a Para Triathlon Mixed Relay was held on Saturday morning, part of the programme of the World Triathlon Championship Finals Abu Dhabi and a landmark moment for para sport.

Given the inherent diversity of para triathlon racing the planning needed to be intricate, the format was bold and the result was revelatory, the atmosphere and celebrations on the course and at the finish testament to the sense of something special being created.

“I have been blown away watching the racing today, the spectators and athletes have loved it and it will be fantastic if we can get this event into the Paralympic Games,” said Debbie Alexander, World Triathlon Vice President and IPC Board Member. “We know the huge impact that the mixed relay had in the Olympics, and I am convinced that it will do the same for Para Triathlon. We are making history today and I want to thank everyone involved for continuing to evolve and innovate our sport.”

“I’m very pleased to be here and to explore new events for these talented athletes,” said Mohamed Alhameli, Chairman of the UAE Paralympic Committee and IPC Board Member. “It is the first time the relay has been introduced and I hope it will become part of the official World Triathlon events soon. Thanks to the World Triathlon management and the organising committee and the participating countries. I think it is a product that will be loved by the media – short, exciting and a great look at what these talented athletes can do.”
—

The showcase event saw 9 teams line up: two from Australia and USA, France, Italy and three World Triathlon mixed nationality teams, and several of the freshly crowned 2022 World Champions were among the athletes making a piece of history.

Each of the four legs involved a one-lap, 150m swim transitioning to a 4.5km bike and 1.2km run, the officials radioing the handovers from the run finish to pontoon to send the next team member into the water.

The mix of genders and classes made for non-stop action, the inevitable huge variation in transition times for those in handcycles versus bikes, prosthetics and visually impaired making the leads and gaps ebb and flow throughout the 70-minute race.

It may have been a showcase event, but there was no shortage of competitive fire from the athletes as Team Australia II took the tape from Team USA I, and it was bronze for Team USA II.

“To break the tape and take it home in the first race was a huge honour,” said Team Australia II’s Jeremy Peacock. It’s such a great opportunity for Para Triathlon, we’ve seen what it has done on the Olympic programme, so hopefully we can do the same for the Paralympic programme now. That was an epic first event, we’ll all have learned a lot today.”

It was Louis Noel H2 of France setting the early pace, up the ramp into transition first with Paralympic Champion Kendall Gretsch H2 and Nic Beveridge H1 in close pursuit. Jumpei Kimura H1 was a minute back for World Triathlon III but made up time in transition and passed the American, Giovanni Achenza H1 putting together a strong bike leg to put the Italian team right into contention.

Lauren Parker H1 was chasing down her compatriot Beveridge, but Noel had given teammate Eloise Marc a sizeable lead as she got leg two underway for France.

The Italian PTVI athlete Francesca Tarantello B3 closed down Marc through the swim and had put 26 seconds onto the French team as she hit T1, Australia’s PTVI athlete Jeremy Peacock taking on his first leg and 35 seconds off the front, Hailey Danz (PTS2) for USA just 50 seconds back and Kelly Elmlinger (PTS4) coming in hot and by now just two minutes off the front as the teams came together.

Out of T2 and Peacock had caught the Italians, Pierre Antoine-Baele had put together a great leg for World Triathlon I and Eloise Marc still going well for France as Elmlinger pursued Danz.

Peacock’s finish saw the officials trigger the start of Australian Sam Harding’s (PTVI) leg, and by the time he and his guide hit transition they had a minute lead over Italy, going on to put together the fastest leg of the day and set the Aussies into a commanding position. French PTS4 World Champion Alexis Hanquinquant was 1m45s off the lead onto the bike, Grace Norman 2m50s for USA II followed by Owen Cravens B3 for USA I and Hideki Uda for World Triathlon III.

With Jeremy Peacock taking on a second leg for Australia (as per the rules for the open race), his mission was clear – to hold on to the significant lead passed to him. The PTS4 World Championship bronze medallist duly obliged, holding off the marauding Americans Chris Hammer and Kyle Coon B1 as they battled for the silver after a mechanical took Team France out of contention, Hammer doing enough to see USA I home in second. 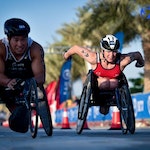 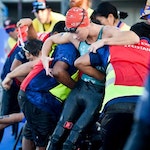 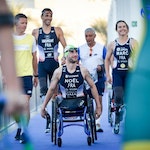 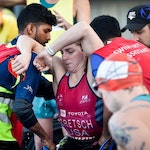 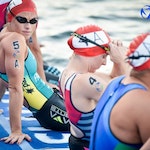 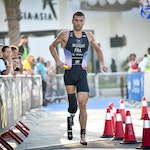 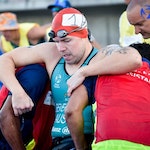 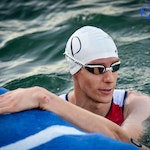 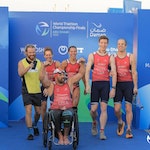 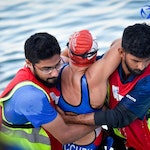 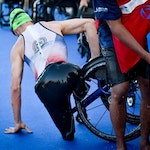 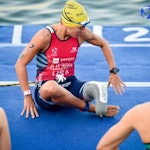