Paratriathlon a success in Wellington 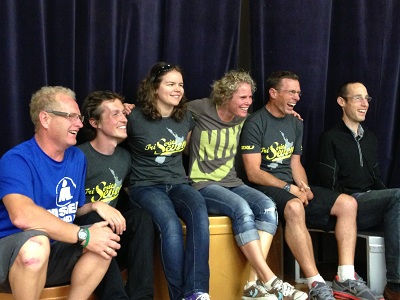 Interest, participation and profile in Paratriathlon continues to grow as does the quality of the elite athletes, as was evidenced at the Oceania and National Championships held in Wellington over the weekend.

The small Paratri entry list was given an extra boost with the inclusion of Paralympic swimming star Mary Fisher and former Paralympic track runner Kate Horan. Fisher competed at the London Games last year, winning 4 medals including gold and a world record in the pool while Horan won silver on the track in Beijing in 2008.

Fisher loved every minute of her race and while she wasn’t eligible to pick up the Oceania title as she was participating with a male guide, she showed enough promise to suggest if she ever wanted to switch from the pool, she would be a contender at the Paratri in Rio 2016.

Horan only decided to compete on the Thursday before the event, after reading an article on Fisher’s participation in the Dominion Post newspaper. She too loved taking part, albeit without quite the preparation she might otherwise have given it.

Paratri star Nick Ruane was again a strong performer in the T3 category as he continues on his road to Rio and looked to enjoy the extra company on the start line, while Nick Bailey backed up from IRONMAN NZ the week before to finish first in the T4 category, ahead of a very nervous but proud first time competitor Drew McLean from Dunedin. The smile on McLean’s face when collecting his silver medal more than made up for the nervous looks on the start line as he contemplated his first ever ocean swim.

“With the help of the Halberg Trust Triathlon New Zealand is making a concerted effort to provide pathways in our sport for athletes with disabilities. Today we saw the potential at the very top level of the sport with the inclusion of Mary and Kate on the start line and the continued development in the career of Nick Ruane as he targets a place on the start line in Rio in 2016.

“These athletes along with Nick and Drew inspire us all with their dedication and commitment to the sport, never letting anything get in the way of their enjoyment or pursuit of success. They are also great role models for children and other age group athletes with disabilities around New Zealand to aspire to; Triathlon New Zealand is working on those pathways to encourage everyone regardless of age, background or ability to be equally brave and take part in this wonderful sport.”