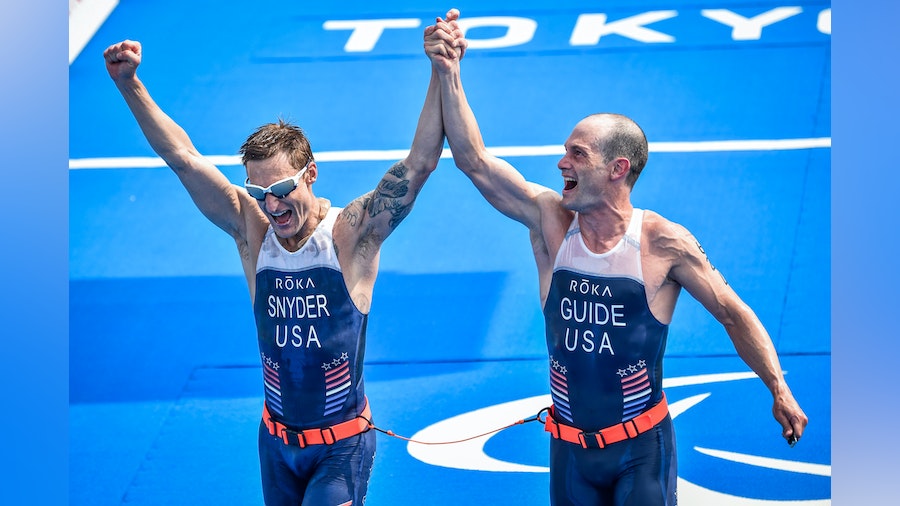 Gold for Brad Snyder in the men’s PTVI race was one of the revelations of the Tokyo 2020 Paralympic Games and the third successive Games he had topped the podium following swim success at London 2012 and Rio 2016.

Remarkably, that first Paralympic gold in the pool came just 12 months after he lost his eyesight in an explosion whilst serving in the US military. It should perhaps also be no surprise therefore that his para triathlon title came after just three years of racing at the top level, during which time he had tasted victory just once on the blue carpet: at the Americas Championships in Wisconsin at the end of June.

In the latest World Triathlon Podcast, Brad reveals how he came to terms with blindness with the help of sport, the ups and downs of the transition to triathlon and how he and guide Greg Billington masterminded their Tokyo challenge. You can listen to the full episode on Apple, Google and Spotify.

—
“By the time that race morning comes, you just can’t wait for the gun to go off and get going. And that’s what made the program a little frustrating for us, sitting in the athlete’s lounge for three hours was some form of torture, but we were really excited about when we’d get our chance to go.”

The early alarm and tense wait for the PTVI races to start start were just a final bump in the long road to the Tokyo 2020 start line for USA’s Brad Snyder. But, having questioned his own reasons for wanting to reach his third Games during the long and difficult months of 2020, at least the first half of 2021 had begun to provide him with enough mental and physical fuel to know he was on the right track. Waiting in the athlete’s lounge that Saturday morning, it as all about switching off and trusting in the meticulous preparations he and guide Greg Billington had been through.

“It was kind of nice that there was another race going on, so you could kind of let your mental gaze drift over to our teammates. Alyssa Seely, Hailey Danz, Melissa Stockwell, the gents Jamie Brown and Eric Mcelvenny and what their races look like.”

By that point, the hard work was done, there was little point in the pair running over their tactics for the umpteenth time. Now it was the moment to get into the zone and prepare for the unexpected.

“You know, I think what is really interesting is in triathlon you have this dichotomy of the opportunity, especially on a course like Tokyo, to really pre-plan everything; you can count your strokes to the first buoy, you know exactly where all the turns are on the bike course, know where you’re going to hit your nutrition. But every triathlete knows that something’s going to come undone. Something’s going to go wrong. Something’s not going to be the way that you had planned it.”

In fact, the biggest race of his career was the one where things almost fell into place just as he would have wanted them to.

“You don’t want to be thinking ‘where’s the buoys?’, you don’t want to have those thoughts, you want to execute the race plan… and I’m really glad Tokyo was one of those races that all of those details came to fruition really nicely. I almost knew exactly where the buoy was going to be before we hit it. I was expecting the tap from Greg, we got through the turns really well.”

One of the keys to Brad’s success is undoubtedly his swim background, something he shares with GB’s Dave Ellis, for whom a challenge for gold was cut short by a mechanical, denying both men a chance to battle it out down the closing stages.

“One of the ways that I got better at pool swimming blind was really knowing my stroke count at all times, not only from a sense of where I am in the lane, but also from a pacing perspective. That’s been really helpful to take into the open water. Sometimes it’s really tempting, even in a short race, you can get lost in your own pace, but counting strokes really helps me stay on top of what my pace is and where I want to be.”

After swimming at two Games, the unique appeal of triathlon called to Brad Snyder, however, and it is something that almost every triathlete will be able to relate to.

“Every triathlon course is just completely different. But within that, there’s the day, the weather, the water conditions, everything is so variable in triathlon and it’s not inconsequential, things like the water temperature can really play in. One thing I was really excited about Tokyo as a swimmer was taking the variable of a wetsuit out of play. Then something like short transition areas really played to our advantage.

“It’s what I love about triathlon. We raced four times before Tokyo this year, each one was completely different. The challenge is to be as prepared as possibly, physically and tactically, but you have to be completely flexible on game day. In Tokyo we were all wondering about the ramps out of the water, they moved a lot with the tide. Things like that can change from moment to moment and I love that about triathlon.”

You can listen to the full podcast below.