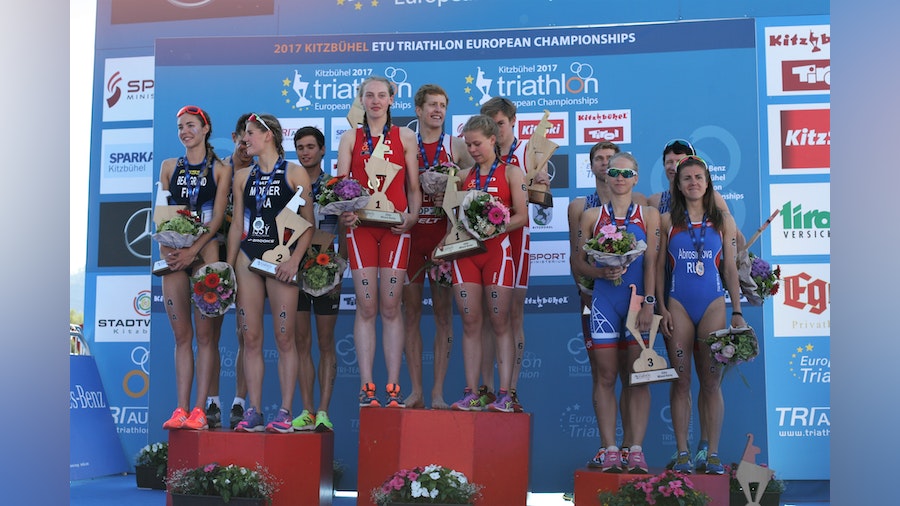 The best triathletes in Europe met this weekend in the beautiful Austrian mountains of Kitzbuhel for the ETU Triathlon European Championships, and Portugal for the Men’s, and Great Britain for the Women’s, came back home with great victories. As victorious were the Dannish triathletes, crowned the European Champions of Mixed Relays a week after the event was included on the Olympic Programme.

Men’s review
It was a stellar line-up in Kitzbuhel and all eyes were upon the Spanish team. With a superb run in Leeds, at 30:44, which was faster than both the Brownlee Brothers, it was Fernando Alarza who looked to be race favourite. He would be surrounded by his teammates, Vicente Hernandez and Uxío Abuín Ares and it looked as if the Spanish would be in with a medal chance, or two.

The swim was led easily by Richard Varga. He set the pace over the first lap and then pulled effortlessly into the lead to run first into T1. With both Polyanskiy brothers; Dmitry and younger brother Igor just a pace behind him the crowds went wild as they watched Alois Knabl AUT follow these athletes along the carpet and into T1.

A steady stream of athletes made it into the lead peloton and Alarza had missed the leaders by almost a minute. It looked like it was all over for him as he battled in the chasing group. Inside the lead group was the solid core of Abuín and Hernandez, the two Russian brothers and the two Portuguese, João Pereira and João Silva. This leading group worked hard along the 8-lap, 40k course and at one point had a lead of just over 55 seconds. Alarza could not possibly make up that deficit, or could he?

As T2 neared, the 5,000 strong crowd that surrounded the Transition Area and run exit, worked up into a frenzy of excitement by the Austrian commentator, cheered, shouted, screamed and applauded as the athletes racked their bikes, stashed the bike helmets, slipped on their running shoes and sped out onto the 10k run.

For the first stages of the 4-lap run, the group stayed pretty much together. Frenchman Raphael Montoya, with a silver recently in Madrid, was tucked into the tight group, led by Spain’s young athlete, Antonio Serrat Seoane.

Slowly the pace increased and from that group, both Russian brothers were dropped. As the run neared the end, four athletes were battling for three medals. The battle would be between Portugal, Spain and France, with Montoya, Hernandez, Pereira and Silva. Behind them and with increasing determination, it was Alarza who had somehow managed to get sight of the leaders and then to find superhuman strength to get so close that we all expect the final lap to be led in by him.

Instead, out at the run turn, it was the Portuguese athletes who injected a deadly turn of pace and suddenly it was all over for the Spaniard. Along with Silva and Pereira, Montoya had been swept along with the excitement and as the athletes came into sight, it was Pereira who kicked again as the crowds urged him along.

A final sprint down the carpet to the finish left Silva with an empty tank. He cruised home for bronze, leaving the delighted Montoya to claim silver.

Women’s review
For the Elite Women, it was always going to be a tough race. With defending champion, India Lee GBR back on the start line and with both Jessica Learmonth and Sophie Coldwell present, the British team looked strong. Over the years we have seen again and again the dominance of the British women in the water and then out on the bike. This race, with no wetsuits and with the testing, technical bike course, was going to give them a great opportunity to set the early pace.

The magnificent setting of the Schwarzsee saw the swim start lined with thousands of spectators, many of them racing over the weekend as Age group athletes.  The heartbeats boomed around the lake and the there was silence.

A two lap swim saw Learmonth take early control with just Russia’s Anastasia Gorbunova for company. Fresh from her Leeds bronze, Italy’s Alice Betto exited with Coldwell a few seconds down and this was the four who worked and worked around the bike course building up a massive lead over the chasing athletes.

By the end of the 40k bike, when they entered a very noisy T2, with the crowds clapping and cheering to the sounds of Zorba The Greek, they had a lead of over 2 minutes and it was certain that the three medals would be shared between the four athletes.

At this point, it was Learmonth and Coldwell who set the pace. They created a gap of about 80m on the first lap and gradually racked up the pace to drop Gorbunova. Betto held on, trying to keep the two Brits in sight but by the third lap, the duo were well ahead and all Betto had to do was keep her pace to secure bronze. Behind, a huge group of athletes, led by Claire Michel BEL and Vendula Frintová was gaining on the Italian and it looked as if Betto had miscalculated.

Learmonth kicked on the final lap and broke away from the younger Coldwell. The British Age Groupers lining the course were shouting and screaming encouragement for the two British women and to more noise in the finish line than we have heard in ages, it was gold to Learmonth, followed by silver for Coldwell. Betto hung on for bronze but then the spring finishes came for the lower placings.

Mixed Relays review
With the great news from the IOC that Mixed Team Relay will be an addition to the Olympic schedule in Tokyo still fresh it was a chance for Europe to show the world just how good this format looks.

With Great Britain’s Sophie Coldwell setting off on the first leg and with Russia’s Anastasia Gorbunova, who was second out of the water on Friday, it was going to be a fast first leg. Fast it was and Coldwell led Gorbunova out of the water. A couple of steps behind was French super runner, Cassandre Beaugrand.

As the athletes came back into view after one lap of the bike, it was a large peloton, led by Coldwell. The 5k bike may have given Beaugrand some protection because once the run started she simply accelerated through the field. As the men set off it was a solid group of athletes who raced into T1 and again a close-packed group of athletes set off for the bike.

Russia’s Dmitry Polyanskiy sped off the bike without his running shoes and although the tactic worked well for speed in T2, he lost ground to Andreas Schilling and Simon Viain, allowing Denmark and France to get the advantage.

The key moment of the race came with Sif Bendix Madsen DEN as she powered her way around the bike and then burst out on the run to create a clear lead for the Danish Team. As she handed over to Emil Deleuran Hansen he had a clear advantage and he did everything to keep ahead of the chasing French/Russian train of Raphael Montoya and Vladimir Turbaevskiy.

It seemed impossible for the young Dane to keep ahead of these two immensely experienced athletes but he did just that. To the cheering crowds and to the delight of the Danish coach, Michael Krüger, Deleuran crossed the line to secure the title for Denmark. Behind him Montoya had just enough pace to keep ahead of Turbaevskiy, who settled for bronze and who was able almost immediately to send a message to his wife, who is so very close to becoming a Mum.