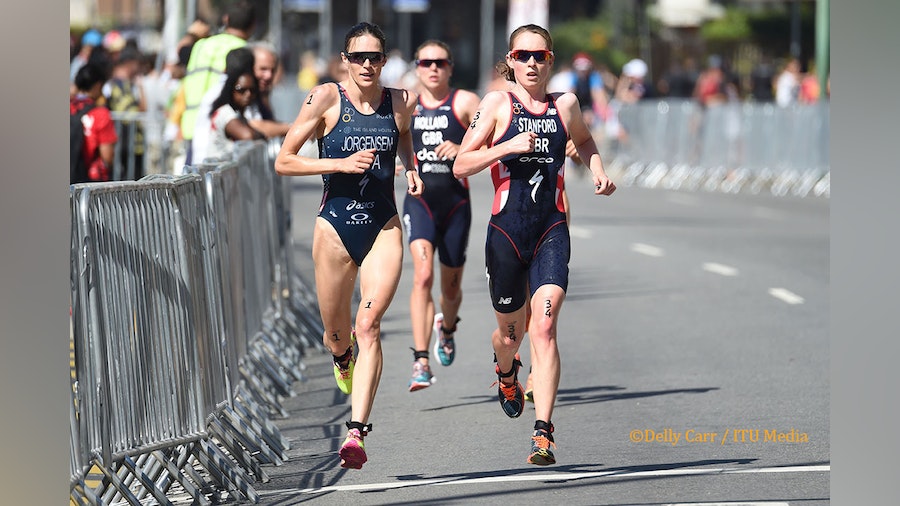 Over the past three years, there has been barely a blip on Gwen Jorgensen’s ITU race record. The American almost went two years on the World Triathlon series undefeated, and took the Rio test event title in 2015. Despite two slight bumps this year, a second and a third in WTS races, she looms as the woman to beat on the biggest stage in Rio. But what makes the women’s field in the triathlon event at the Rio 2016 Olympic Games so intriguing is that it wouldn’t be a complete shock if Jorgensen wasn’t standing on top of that podium come the afternoon of August 20. Despite the fact that the Olympic triathlon has always produced surprises, this year in Rio the list of contenders runs extremely deep.

There are also more than a few handfuls of WTS race winners, all those athletes listed above have won a title, plus Sarah True (who finished fourth at the London 2012 Olympic Games), Vicky Holland (the 2014 Commonwealth Games bronze medallist), Barbara Riveros (CHI) and Anne Haug (GER). Flora Duffy (BER) and Katie Zaferes (USA) have both joined that list in the past few months, hitting form at the perfect time. Zaferes became one of only very few women to beat her US teammate Gwen Jorgensen recently when she triumphed in Hamburg just last month. Then there are Ashleigh Gentle (AUS) and Rachel Klamer (NED), who have also finished on the podium of WTS races this year.

What all this points to is a thrilling tactical race in Rio. No one is faster on feet than Jorgensen, and therefore the first two stages hold the key to the possible upset. Those races that she has lost this year all came down to a killer bike leg, Jenkins and Duffy broke away on the Gold Coast, and while Jorgensen chased Duffy down – she couldn’t catch Jenkins. In the sprint distance race in Hamburg just a few weeks ago, Zaferes and Klamer got away in a group and stayed that way until the finish. Pretty much only one thing is for sure, the women’s triathlon race at the Rio 2016 Olympic Games will be two hours of fascinating action and brilliant storylines.

For Jorgensen, it’s a chance to solidify her record as one of the best modern triathletes. Picked up in USA Triathlon’s collegiate recruitment program, Jorgensen started on the ITU circuit in 2010 and in the 2011 London Olympics test event, pulled out the fastest run split of the day. A flat tire ruined any chance to follow up that result in the Olympic race, but soon Jorgensen was flying on the World Triathlon Series circuit. Her run speed was her killer trait, but it wasn’t always enough to win when she started at the back of the pack. Slowly though, that form started to change and in 2013 in Stockholm, she won after leading the race from the start. After two races that didn’t go to plan, where she started to question her ability to compete, Jorgensen’s incredible 13-race winning streak started. Throughout she kept throwing out ridiculous run splits, the fastest since the era of Beijing medallists Emma Snowsill and Vanessa Fernandes, and thrilled crowds as she ran through the field.

For Jenkins, it’s a chance at redemption. One of the favourites heading into London Jenkins finished a fighting fifth and then revealed she had been battling a knee injury in the lead in and during the race. Rio is her third-time at the Games, and signs suggest it’s her best shot yet. Most importantly, Jenkins is one of the only women to have beaten Jorgensen across the line. She did it once in Cape Town in 2014, where she finished second and Jorgensen third, which was the final race before Jorgensen’s incredible winning streak. Jenkins then ended that very streak on the Gold Coast in April this year, in her first WTS win since 2012. While Duffy faded slightly in that final run, as Jorgensen and Hewitt jumped her for podium places, since then she has proved she is a serious contender. Her results trail since that race has been a steady climb. Third in Cape Town, second at Leeds, her first WTS win in Stockholm. Bermuda has been represented on the Olympic stage before, but it would be a chance for the NOC to stamp its name on a first triathlon medal (Bermuda has only won one Olympic medal in the history of the Games). It’s Duffy’s third Games, she recorded a DNF in Beijing and 45th place in London.

The London 2012 Olympic champion Nicola Spirig might have broken her hand in the opening race of the year, but just a few weekends ago she finished second in a men’s Olympic distance triathlon race. Spirig’s journey since that London gold medal has been unique, she’s given birth to her first child (with fellow Olympic triathlete husband Reto Hug), and then returned to racing. She is chasing a piece of history in Rio - to become the first athlete to win two Olympic gold medals. Spirig wouldn’t be the first mother to win gold though, fellow Swiss triathlete Brigitte McMahon also had a three-year-old son when she won gold in Sydney. However, if Spirig could triumph she would be only the third woman in Olympic history to defend a Gold medal after becoming a mother. Spirig’s fellow medallists have also had time off racing since London, but it’s been the enforced kind through injury. While Densham and Norden have both battled various issues since London 2012, they both have shown the ability to have a big race when it counts before. Norden in particular is potentially well suited to the technical Rio bike course.

Sarah True’s (USA) motivation to push one spot higher than London probably gained more motivation after last year’s Rio test event, where she also finished fourth. Another athlete strong in all three legs, which the Rio course will demand, she is likely to be within striking distance again. Great Britain’s Non Stanford and Vicky Holland might each be aiming for individual glory, and are a good chance of claiming it after they finished second and third in the test event, the pair are also great friends, housemates and training partners.

Then there is Kirsten Sweetland who is finally making her long-awaited Olympic debut. Sweetland won an ITU junior world championship in 2006, but since then her career has been littered with injury, including nine fractures, two torn plantar fascia, two concussions, a parasite, and a chronic bacterial infection. That last issue came just after her best season in years in 2014, which included a Commonwealth Games silver medal, but Sweetland will be on the start line at Copacabana.

Australia’s Emma Moffatt was just breaking onto the scene in 2008 when she claimed bronze in Beijing, and in Rio she will be the nation’s first triple Olympian. While initially thinking she would finish chasing the Games after London, a bike crash in that race put Rio back on the agenda.

Finally, while Andrea Hewitt is one of the most consistent performers on the ITU circuit, her five ITU World Championship medals are proof, she’s also had one of the toughest possible experiences leading into Rio. Hewitt had to say goodbye to her fiancé and coach, fellow triathlete Laurent Vidal, who tragically passed away in November 2015, no one would begrudge her a good result in Rio - and she is a serious chance to claim New Zealand’s fourth Olympic medal in the sport. Strong in all three disciplines, Hewitt is one of the woman that could get away on the bike & push far enough ahead to maintain her speed all the way to the finish line. She’s also wearing start number 38, which is one of the lucky start numbers that has proven to have good medal potential luck.