Chile’s Barbara Riveros Diaz, a 22-year old member of Team ITU Sport Development, pulled off a stunning upset in Sydney today, topping Kiwi Andrea Hewitt and Australia’s Emma Moffatt in a thrilling sprint finish to win round one of the Dextro Energy Triathlon ITU World Championship Series. Riveros Diaz stopped the clock in 2:04:19, with Hewitt and Moffatt just one second behind.

“I was a bit nervous heading into the final lap,” Riveros Diaz said. “I’m usually not very good at a sprint finish, but today it all worked out very well.”

“I was a bit nervous heading into the final lap,” Riveros Diaz said. “I’m usually not very good at a sprint finish, but today it all worked out very well.”
Barbara Riveros Diaz

Forty-seven women took to the water’s of Farm Cove in world-famous Sydney Harbour to officially kick off the women’s 2010 World Championship Season. A group of Americans including Laura Bennett, Sarah Haskins and Sara Groff immediately charged to the front, but the pack remained in a tight bunch throughout the first of two 750-metre swim laps. Bennett took off as soon as she dove in to start the second lap of the swim, stringing the group out into one long line.

Bennett was the first to make transition, with countrywomen Haskins and Groff right behind. A big group came into transition only a few seconds later, including Moffatt, the reigning world champion. Moffatt’s strong swim came as a surprise, given that she broke her shoulder two months ago in an accident while bike training.

“I was a bit surprised that my swim went so well,” Moffatt said. “It was good to get out with the group. That helped me settle into a comfortable pace on the bike.”

A small group attempted a break on the first of eight laps on the bike, with Switzerland’s Daniela Ryf leading the way, but the breakaway group was caught by the big pack of chasers as they started lap two and Sweden’s Lisa Norden took over the lead role. The front group, containing over 30 women and all the big hitters, continued to ride at a comfortable pace through the rest of the bike leg. There were a few breakaway attempts on the final two laps of the ride, but none were able to stay away from the peloton for more than a few minutes.

Norden led a group of almost 30 women into T2 and immediately put in a surge as the lead ladies headed up the hill out of transition. The Swede’s effort split the lead pack into two, with 20 women able to keep pace on the opening kilometre. Most of the big guns hung with Norden, including Moffatt, Bennett, Riveros Diaz, Canadian Kathy Tremblay, and South African Kate Roberts. Norden continued to lead throughout the first of four laps on the run, stringing out the lead group. By the time to top women wrapped up lap one, the group was down to only 14 runners, with Norden and Moffatt at the front.

“The run was so hard and a bit different,” Hewitt said. “Last year Emma would run so quick at the start, but this course, with the hill right at the start, kept a few of us together.”

As the four leaders made the final roundabout on the causeway overlooking Sydney’s Circular Quay, it was clear that the podium would come from the front group; all that was left to decide was the order. As they stormed down the final hill with less than 800 metres to go, Riveros Diaz was the first to make a move, but Hewitt quickly responded and pulled the group back together. Riveros put in another surge as she made the final turn into the finishing chute and this time she couldn’t be caught. The Chilean broke the tape in 2:04:19, with Hewitt only a second behind. Moffatt finished another second back of Hewitt to take the final spot on the podium. Adachi hung on for fourth, finishing 10 seconds behind Moffatt, with Sweden’s Lisa Norden rounding out the top five.

“We really pushed each other hard on the run,” Hewitt said. “Barbara was just too tough coming down that final hill and I couldn’t stay with her. She was amazing today.” 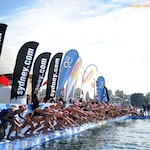 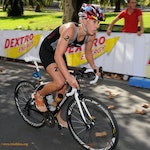 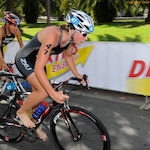 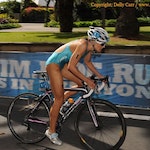 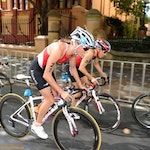 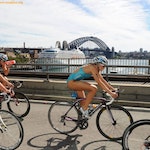 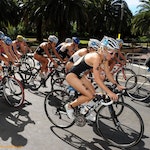 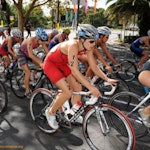 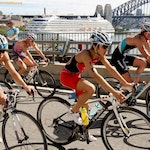 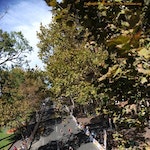 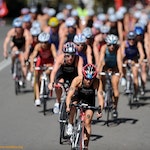 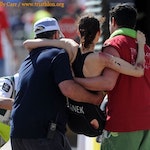