The German clocked a total time of 54:25, with his strongest portion of the race coming in the final run. Bourseaux finished second in 54:29, with Spain’s Jairo Ruiz Lopez taking third in 56:34.

Seventeen different countries in total were represented by 60 athletes at the event, which was a major jump from the 2013 event — the first in paratriathlon — which featured 48 athletes, 30 of whom were from France. 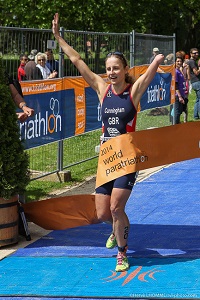 On the women’s side, Great Britain raced to two titles with paratriathlon star Clare Cunningham setting the tone with a victory in the PT4 class in a time of 1:05.40.

A strong field of 46 elite men lined up, on the white sand of Busan’s famous…
The stunning coastline of Busan set the scene for the inaugural World Triathlon…
As the long transition back to international racing continues under essential…
more news →