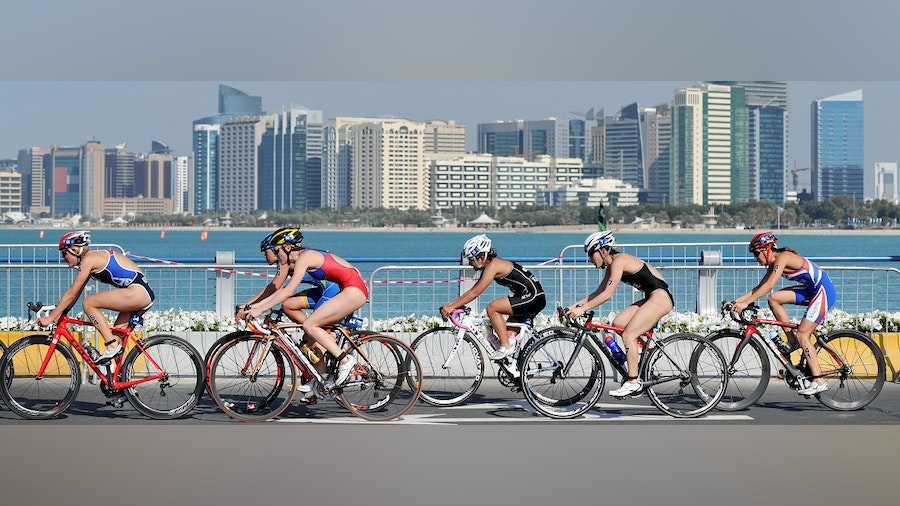 One of the most anticipated triathlon seasons is set to begin this Saturday with the 2016 ITU World Triathlon Series kicking off in Abu Dhabi. The world’s fastest athletes will toe the UAE start line for a chance of earning the first Columbia Threadneedle Rankings points of the year, all leading up to the Rio de Janeiro Olympic Games set for this summer.

Last year Abu Dhabi joined the WTS calendar and became the first Middle Eastern city to ever host a WTS event. This year, the city returns to open up the 2016 season, but this year the course will feature the standard 1.5 kilometre swim, 40-kilometre bike and 10-kilometre run distance. The elite men are set to compete first, but the women have a jam-packed start list full of talent that is sure to open the season in a blaze. While two-time World Champion and reigning Abu Dhabi victor Gwen Jorgensen (USA) is holding back from starting her season this weekend, compatriots Sarah True and Katie Zaferes are all squared away to compete and top the women’s start list.True was the second runner-up for the World Champion title last season, after finishing third in the overall Columbia Threadneedle Rankings. She graced three WTS podiums in 2015, including her victory in WTS Stockholm. She also secured her spot to represent the United States in Rio this summer after placing fourth at the 2015 Rio de Janeiro Olympic Qualification Event. She’s got a new training approach this year, so look out for True and she mixes things up this year.

While Zaferes just nearly missed her chance to complete the three-woman team heading to Rio last season, make no mistake that the beginning of this season she will be battling to claim what is hers to lose. She had a groundbreaking 2015 season, reaching the podium in six WTS events. While she has yet to win her own gold, she claimed five silver medals, the first of which was right here in Abu Dhabi. So watch out for Zaferes to finally make her mark on the top of the podium this year.

Rachel Klamer (NED) and Flora Duffy (BER) are the only other two women to appear on the start list that finished in the top 10 of the Columbia Threadneedle Rankings last year. Klamer was the silver medallist at the 2015 Baku European Games and ended her season with a very strong finish. She placed fifth at the Chicago Grand Final race and then went on to take second at the Cozumel World Cup, so will be wanting to carry that momentum into the new year.

Duffy will arguably once again be one of the fiercest competitions on the bike course this season, as she proved right here in Abu Dhabi last year when she stormed through the bike for her first WTS podium finish. She consistently takes a place in the front of the lead pack during the second leg. This year she is hoping to make some huge personal gains in her performances, especially as she gets ready to compete in her third Olympic Games.

Reigning Olympic gold medallist Nicola Spirig (SUI) is also making her first season WTS appearance this weekend. While last year she was not super active in the WTS circuit, when she did compete she made her presence known. She claimed the bronze medal in Cape Town and then was crowned victor at the Baku European Games and the Geneva ETU European Championships. Spirig enters 2016 with hopes of reclaiming her Olympic title, as she has already qualified for Rio. Other dangerous names on the start list to keep an eye on this season is Japan’s Ai Ueda, Australians Ashleigh Gentle and Erin Densham and Great Britain’s Helen Jenkins, Jodie Stimpson (GBR) and Stimpson’s training partner Olympic silver medallist Lisa Norden (SWE). Earning early points on the ITU calendar means gaining early advantages going into Rio, all will be on high alert for all of these women.

As a tribute to the late, beloved Laurent Vidal, the No. 1 position in the men’s and women’s start list has been left open.

The men will get the 2016 World Triathlon Series underway at 1:06pm on Saturday March 5, while the women will follow at 4:06pm local time. Follow all of the action live at triathlonlive.tv and on twitter @triathlonlive. Trifecta returns this year with new features. Create a new login and pick your favourites now at trifecta.usatriathlon.org.