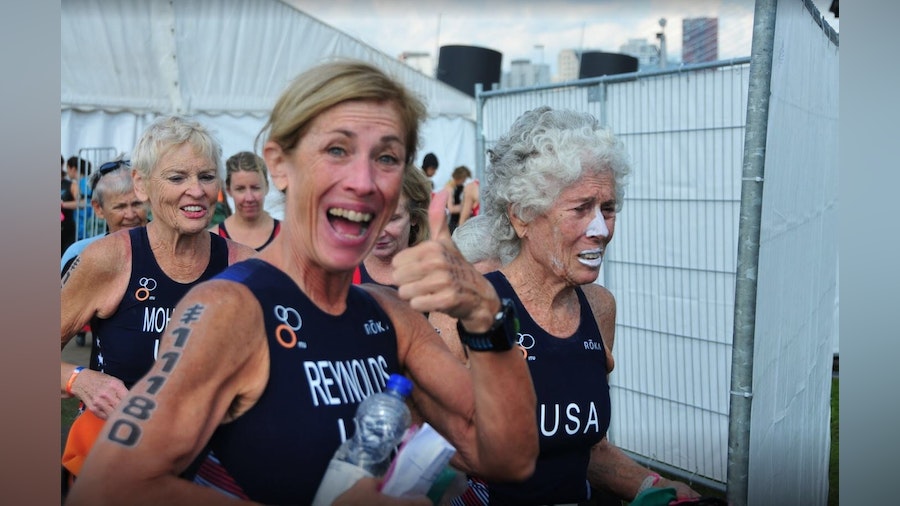 Sue Reynolds was unhealthily obese, she was unable to tie her own shoe laces and had no idea about the impact that sport would have on her life.

Now 64 years of age, Sue has lost 90kg of body weight over the past five years.

“In 2012, I was morbidly obese. I couldn’t even tie my own shoes and had no idea that I liked sports.  Over a five-year period, I lost 200 pounds through sound nutrition and exercise, fell in love with triathlon and ended up placing sixth in the draft-legal sprint event at the 2017 ITU World Triathlon Championship in Rotterdam.”

“When I first started exercising, triathlon became my secret daydream. However, I never thought I’d actually do one.”

“For my first “workout” I walked to the neighbour’s driveway and back (about 300 meters) and was close to red-lining! I walked a little farther each day until I could walk a 5k without stopping.. Next, I focussed on swimming. I enrolled in a water aerobics class and started swimming a few laps. Finally, I took a spin class and began riding my bike around the neighbourhood.”

“I didn’t know any triathletes and had never been to a triathlon. I found a book called When Big Boys Tri about an overweight man who did sprint triathlons and read it cover to cover. I figured if he did it, I could do it. I registered for my first sprint triathlon. I kept everything a secret. The only one who I was attempting a triathlon was my husband.”

“On the morning of my first triathlon, I was terrified. I had no idea what I was doing. In my first transition, I put on clothes over my bathing suit, brushed my hair and ate a sandwich! I finished dead last, but I felt like I had won the Olympics! I was hooked!”

Reynolds is now hooked on the sport and thrives across all disciplines but especially loves the power on the bike.

“I love the bike. There’s just something about riding with the wind in my face that makes me feel like I’m ten years old again. I love powering a finely tuned machine with my muscles and feeling how the bike responds as I corner.  I just love everything about bikes.”

The 64-year-old attests that the triathlon community are supportive and have been an influential and inspiring part of her journey to today.

“The triathlon community is truly unique. When I’m in transition before a race with all the other triathletes, I always feel like I’m in the happiest place on earth. I love witnessing how everyone encourages, helps and supports one another. I love how we all celebrate each other’s dreams and accomplishments.”

“The kindness of the triathlon community was immensely helpful as I strived to transform my life.”

“They gave me hope. They kept me going when I started and still keep me going today. I’ve never experienced any community like the triathlon community.”

In 2018 Sue Reynolds will once again line up to contest on an honourable world stage, as a team USA representative, at the 2018 World Triathlon Grand Final Gold Coast, to represent Triathlon USA with honour.

“There is no bigger race than the World Championship. I am motivated to reach each of my process goals so I come to Worlds ready to perform on race day.”

“My husband, Brian, will be in Gold Coast to support me before and on race day. My family, friends, and work colleagues will follow my race progress on the internet and cheer from afar.”

“I look forward to being surrounded by people from around the world whose love for triathlon is just like mine.  The experience at Worlds always reminds me that while our countries may be vastly different, in our hearts, we are all pretty much the same. I love seeing AUS, MEX, CAN, GBR and other country codes on triathlete’s uniforms.  I’m touched as people from different countries shout encouragement to me as I run. The kindness found within the triathlon community is worldwide.”

“I am inspired in different ways by different people. The kindness found within the triathlon community is worldwide.”

“Externally, my coach inspires me. When I first started doing triathlon as a morbidly obese person, he saw things in me that I didn’t see in myself and then helped me see those things too. My original goal was to be an alternate for Team USA and Worlds. My coach said, “Let’s not be an alternate. let’s make the team!” I trust his training plan and love the challenge of following the workouts he writes. No excuses, whatever it takes. His belief in me inspires me to reach his expectations.”

“Internally, I’m inspired by curiosity. I see something difficult and wonder if I could do it. I ask myself, “If I work really hard, pay attention to every detail and take no short-cuts, could I do that?”  I am inspired by setting goals, working hard, and seeing progress.,” Reynolds said.

“During races, I am inspired by friends and family members who face physical challenges every day with courage and grace. While I choose to suffer the temporary pain that I feel during a race, they did not choose to endure the constant pain they feel on a daily basis. When I think of the grit they demonstrate on a daily basis, I am inspired to keep going when things get tough during a race.  I write their names on the palm of my hand prior to each race.”
“On race morning, I am always very calm. I figure at this point, the work is done. I know the course. I know my race plan. I am ready.”

“I am living the dream.”

The highly ambitious and motivated triathlete concluded by highlighting these main points as part of her journey to the start line:
1. People can transform your life at any age.
2. People can lose 100+ pounds without surgery or drugs.
3. People can reach big goals by making a series of sound choices or time.
4. Kindness can change a life.
5. Triathlon is for everyone!

It’s time to gear up for World Triathlon action in Queensland, Australia, as triathletes, sports fans and the wider community ride the wave to the World Triathlon Grand Final start line.