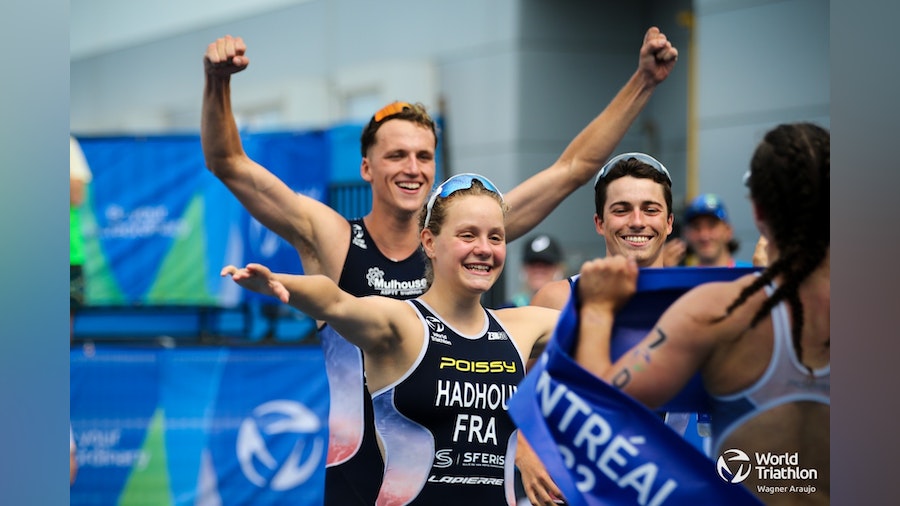 The penultimate race of Sunday’s Sprint and Mixed Relay World Championships produced the familiar sight of a strong French team performance to deliver the Jr-U23 Mixed Relay gold in Montreal. It had been a two-team duel for much of the race as Great Britain shared the lead until Paul Georgenthum’s decisive break, Germany winning bronze.

A brilliant run from Reilly saw him pass Morlec and tag Daisy Davies first, getting underway six seconds ahead of Ilona Hadhoum. Kira Gupta-Baltazar was away next for Canada, one of the strongest swimmers in the field, bringing her team into third but just unable to draw close enough to Britain and France to make a pack.

Marta Kropko (HUN) followed her out and the two rode together in pursuit of the leaders but the gap ahead was growing, while Germany’s Julia Brocker and Netherlands’ Luna De Bruin were gaining ground.

By the end of the second leg it was Germany and Netherlands in third and fourth, while a strong finish from Hadhoum saw her first to tag teammate Paul Georgenthum and with a 38 second gap to Fabian Schonke (GER) and Niels Van Lanen (NED).

James Chantler-Mayne was able to stay right on the Frenchman’s feet through the swim, the pair arriving into T1 together now with 51 seconds to Van Lanen for the Netherlands and Schonke.

By now, New Zealand were looking out of contention 2 minutes back, Australia 2m30s and the USA 2m45, all quickly running out of race, and once the bike section was over and the penultimate run underway, it was Georgenthum who found the extra gear and began to pull clear out front.

He opened up nine seconds at the tag, and that was a gap that would prove vital, Candice Denizot picking up the responsibility of trying to bring home the gold and able to stretch to a 20 second lead through the water.

Friday’s Junior World silver medallist Jule Behrens was now out for Germany and taking up the chase along with Netherlands’ Sonja De Koning, Colette Reimer giving the Canadians plenty to cheer as less than 10 seconds separated those in the hunt for bronze.

Denizot had the better of the transitions out onto the bike, and though Britain’s Bethany Cook was able to reduce the deficit from 18 to 13 seconds over the first bike lap, Denizot had the legs to hold on and take the tape and gold for France by 20 seconds. Cooke crossed for the silver, Behrens and Germany with bronze, Lili Dobi ensuring fourth place for Hungary and Reimer running Canada into fifth.