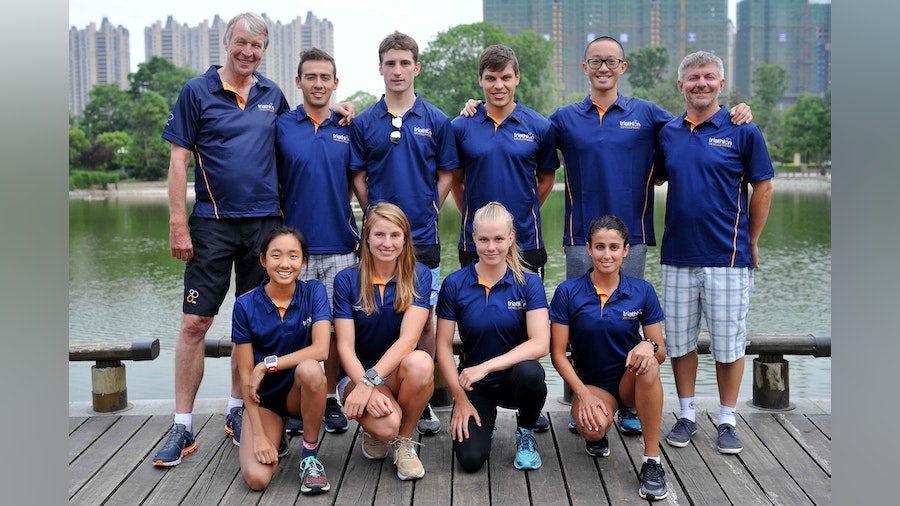 The 2017 season couldn’t have started better for the members of Team ITU. They kicked off the season at the 2017 Chengdu ITU Triathlon World Cup with success. and are already working towards their next race, the 2017 Madrid ITU Triathlon World Cup, taking place at the end of May. For these young triathletes, who come from emerging or developing nations, the exciting road to Tokyo 2020 has only just begun.

The primary objective of Team ITU is to provide support, resources and expertise to selected triathletes to compete at a World Cup level, leading them to qualify for the Tokyo 2020 Olympics.

After the success of the Rio Olympic Games where 11 Team ITU athletes had the chance to compete, the programme continues with three Team ITU athletes already selected for the Tokyo 2020 Team: Kaidi Kivioja (EST), Jason Wilson (BAR) and Ron Darmon (ISR). New members that joined the team this season now have the chance to show that they too are on the path to Olympic glory.

“I feel like I am a veteran already, I started triathlon ten years ago in 2007 and I’ve been a part of Team ITU since 2012. Since then I’ve come a long way, and even last year I qualified for the Olympics,” said Kivioja, who proved that she is on a great path for Tokyo, finishing 9th in her semifinal and then 19th in the A final in Chengdu.

“It’s hard for me to train at home in Estonia first of all because of the weather. There aren’t many training partners so I try to join a lot of different groups and train in warmer conditions like Australia and Spain and of course training camps with Team ITU when possible.”

“Team ITU has helped me a lot, I remember when I started, like Edda (Hannesdattir), I was travelling alone and it was really hard, because when you have the team you have the support at the race. There’s always somebody who gives you advice and just being part of a team environment helps you a lot”, she said.

Edda was not so lucky in China for her first race of the season where a bike crash on her semifinal left her out of the finals. “I only started training for triathlon a year and a half ago and in August I moved to Denmark and started training with the Danish national team because we don’t have any structure back home in Iceland. This season I want to learn a lot, I want to focus on myself and try to improve on the things I can improve. I’ll try to race as much as I can just to get more experience, so that would be the main focus for this season.”

“The programme helps a lot, the opportunities it gives you especially when you are starting, like me, and you don’t have much experience and the support you have at the races because I don’t have a national coach travelling with me or anything like that, so it’s really good to have coaches here and people to support you.”

For Mick Delamotte, Head Coach of Team ITU in Chengdu, “It’s critical for the sport to develop globally. We’re not only introducing new athletes, but we’re establishing legacies in new countries within the sport and that’s important to grow it, both at a grassroots participation level, but hopefully at an elite level going forward. . Not just for this Olympic cycle, but for future generations of triathletes across the world and in these countries.”

“I think the biggest thing for the athletes is that they feel supported. There is a team of people around them and this is very important to solve the problems that they encounter through travel, sickness, mechanical problems, race tactics, etc. Outside of that, we’re very mindful of enabling the home coach to make decisions and grow and develop with the athletes as well. We like to support the athlete but also the home programme and the home coach. And we will bring some home coaches into the programme, into races like this, in every Team ITU camp that we do. So they will get the opportunity to travel and work alongside us as coaching staff”, explained Delamotte.

Jeremia Christy Suriadi, a 19 year old from Singapore, said: “I think I’m really lucky because ITU is looking to bring more countries in, countries that were previously not really on the triathlon circuit. In Singapore, we don’t have a very strong triathlon culture so I applied to compete here with Team ITU and I got selected.”

“I went for my first international race just last year, and this year I plan to take part in a lot more Asian Cups and I really hope to be able to make the Commonwealth Games so for that I really need to improve my swimming which is the weakest of my disciplines”, she said. In Chengdu, she did not make it to the Final B, but is already thinking about her next race.

Overall, the results from Team ITU in Chengdu World Cup were remarkable, with Kivioja making it to the A Final, and Leslie Amat Alvarez (5th B Final), Domen Dormik (5th B Final), Brian Moya (6th B Final) and Ognjen Stojanovik (16th B Final) finishing both races. Congratulations to all the Team ITU participants.